Astronaut Mike Massimino floated next to the Hubble Space Telescope’s cylindrical body and began to remove the screws that fastened a handrail to one of the telescope’s instrument panels. The first three screws came out easily, but when he put his power tool to the final screw, the bit began to spin.

He had stripped the bottom right screw. It wouldn’t budge.

“I saw what I had done and my heart just sank,” Massimino recalled.

That day, Massimino and fellow astronaut Mike Good were tasked with replacing the power supply of one of Hubble’s critical instruments: the Space Telescope Imaging Spectrograph (STIS). The instrument provides scientists with information about the temperature, chemical composition, density and motion of celestial objects. Its power supply wasn’t initially designed to be replaced, so the team had practiced for months with hundreds of carefully crafted tools to perfect the maneuvers.

“I quickly did the deduction,” Massimino quipped. “If that screw doesn’t come off, the handrail doesn’t come off, and then 111 screws don’t come off the panel. That means the power supply doesn’t come out; a new one doesn’t go back in, and STIS doesn’t come back to life. We’ll never find out if there’s life in the universe and everyone’s going to blame me.”

Ten years ago today, Massimino, Good and five other astronauts aboard the space shuttle Atlantis launched into space to visit Hubble one last time. During this mission, they would integrate new instruments, repair broken equipment and replace critical components of the famed telescope.

At the time of the fifth servicing mission, scientists expected that Hubble, which launched in the spring of 1990, would have roughly five serviceable years left, as was typical after servicing missions. But the telescope has far surpassed expectations, already doubling that time and showing no signs of calling it quits.

“It shows that people — engineers, technicians, scientists, astronauts — can do just about anything,” said three-time Hubble servicing astronaut John Grunsfeld. “Our abilities in space are really quite limitless.”

Rising to the Challenge

Some at NASA wondered, if the agency wasn’t going to send humans to work on Hubble, perhaps it could send robots instead. There was a lot of work to do. Three of six gyroscopes, which stabilize the telescope and help it lock onto its targets, had failed. In 2004, Hubble’s STIS instrument failed and needed repair, too. At one point, Hubble was unable to conduct science for approximately one month. Using robots to complete all the necessary work on Hubble would be an extraordinary undertaking.

Frank Cepollina, known to his colleagues as Cepi, was ready for a challenge. Cepi, the former associate director for NASA’s Satellite Servicing Capabilities Project, is credited with developing the first plans to service an orbiting satellite. He was just as eager to find a way to service Hubble robotically. His team worked diligently to develop a system of modules that could easily be installed on Hubble by robots.

But on Oct. 31, 2006, Michael Griffin, O’Keefe’s successor as NASA administrator, announced that a space shuttle would, in fact, return to Hubble yet again. NASA took every necessary safety precaution. A backup space shuttle and flight crew were prepared and ready to launch from NASA’s Kennedy Space Center in Florida to rescue the team working on the telescope should they find that their shuttle was damaged during liftoff.

The decision would be the first step in an incredible journey to repair the iconic telescope.

“There was both relief and excitement,” said Cepi. “Relief because we had done human servicing before, and disappointment that we weren’t going to have a chance to use this robot.”

While Cepi and his team were developing a plan to repair the broken STIS, a second science instrument on Hubble, the Advanced Camera for Surveys, also failed. Rather than following the established method of developing entirely new instruments to replace the old ones — which often cost hundreds of millions of dollars — Cepi’s team decided to ask the astronauts to open up panels and operate on the existing machinery.

“For the first time we had developed tools sophisticated enough to do in-orbit surgery,” said Cepi.

The launch was scheduled for October 2008. During the 14-day mission, astronauts Scott Altman, John Grunsfeld, Michael Massimino, Michael Good, Megan McArthur, Gregory Johnson and Andrew Feustel would work to repair the disabled telescope. The mission would have lasting impacts, setting the stage for yet another decade of ambitious scientific endeavors.

In the months before the planned October launch of the fifth servicing mission, flight operations personnel were alerted to an anomaly with Hubble’s Science Instrument Control and Data Handling (SIC&DH) unit.

The SIC&DH includes an onboard computer that manages the use of the science instruments as well as an electronics box that formats scientific data collected during experiments into a language that can be easily read and transferred back down to Earth. “If you don’t have the SIC&DH, you don’t have any science,” said Larry Dunham, Hubble’s chief systems engineer at NASA’s Goddard Space Flight Center in Maryland, where Hubble is controlled. “It’s critical.”

The team scrambled to find answers. “It hiccupped,” said Cepi of the malfunction. “It failed to reliably gather and format the scientific data to be sent down to the ground.” It would have taken engineers years to design and build a new machine, so the quick-thinking team plucked parts from storage and from a spare SIC&DH module out of a simulator at Goddard.

“We assembled a flight spare from backup units, which were designed in the 1980s,” said Jim Jeletic, Hubble’s deputy project manager. “We tested the assembled unit and made sure it was ready to fly.” The entire process took roughly six months, then the hardware was cleared for the mission.

Finally, on May 11, 2009, the Atlantis launched from Kennedy and set out toward the stars.

Massimino and Good hovered around the problematic handrail. Back in the shuttle, the rest of the crew worked with engineers on the ground at NASA’s Johnson Space Center in Houston to find a solution. “For four hours, we were completely stopped in our tracks,” said Grunsfeld.

Massimino attached different bits to the end of the power tool in an attempt to loosen the screw. Nothing worked. Meanwhile, the mechanical response team back on Earth frantically searched for a solution. Finally, a team at Goddard came up with a workaround. Massimino would have to rip the handle off. Critically, he would have to make sure no sharp edges were in danger of puncturing his suit. If possible, he would also have to capture any loose pieces that might float away.

Massimino braced himself and pulled. Finally, the handle broke free. After an hours-long delay filled with anxious communications between the shuttle crew and Earth, the mission could continue as planned.

It was a tense moment during an ultimately successful mission. In the previous days, the two teams of astronauts had successfully swapped machinery, installed new instruments and replaced batteries. 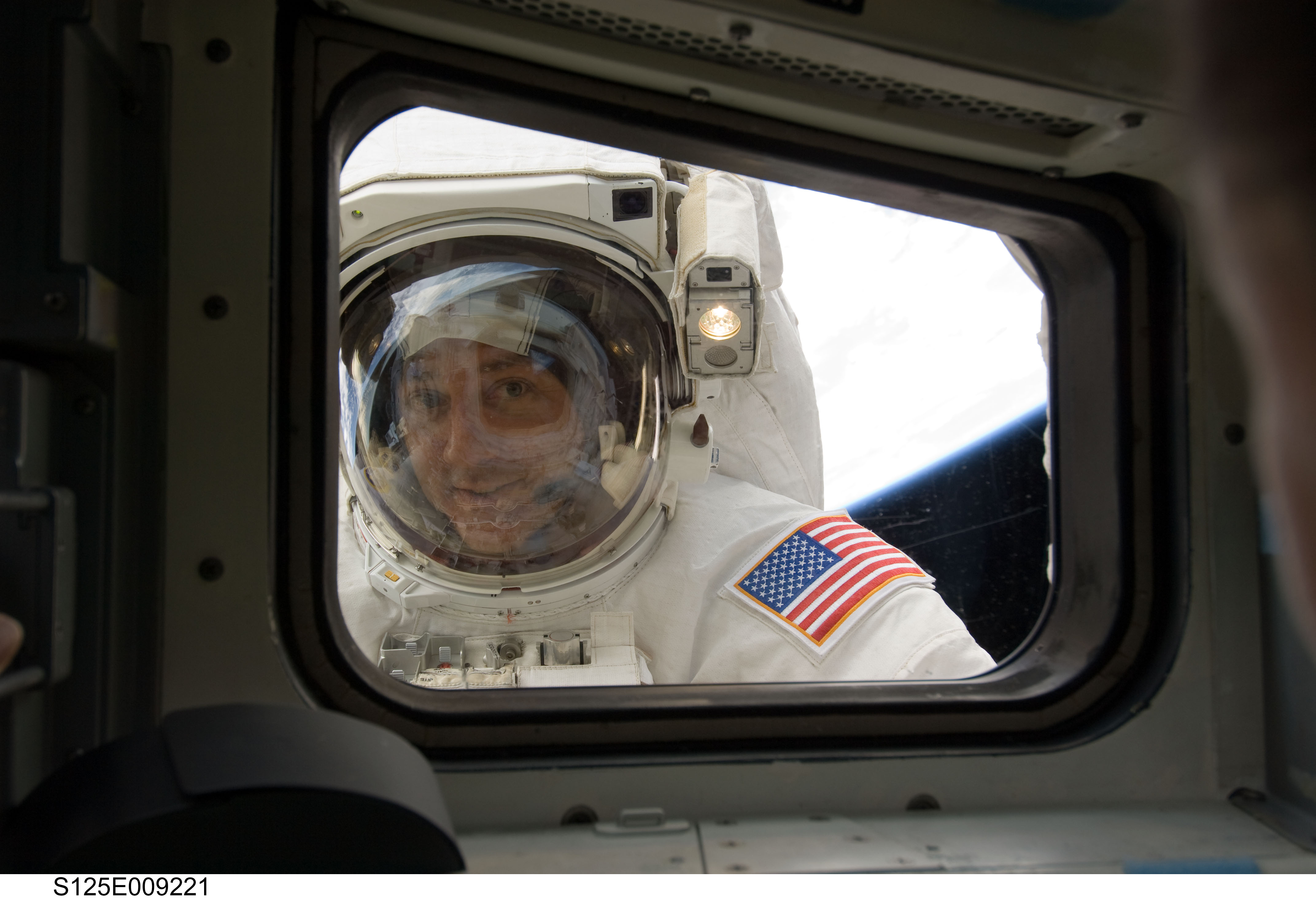 Grunsfeld and Feustel, the first team to conduct repairs, replaced the SIC&DH and switched the Wide Field and Planetary Camera 2 out for a more advanced camera, the Wide Field Camera 3, which would capture images of the stars at a far greater resolution. There was a moment, as Grunsfeld removed Wide Field and Planetary Camera 2, however, when a bolt locking the camera in place got stuck. Luckily, the team was able to eventually free the bolt and swap the old camera for the new one.

The next day, Massimino and Good installed fresh nickel-hydrogen batteries and replaced the rate sensor units, each of which contained two faulty gyroscopes. On the third spacewalk, Feustel and Grunsfeld repaired the Advanced Camera for Surveys. 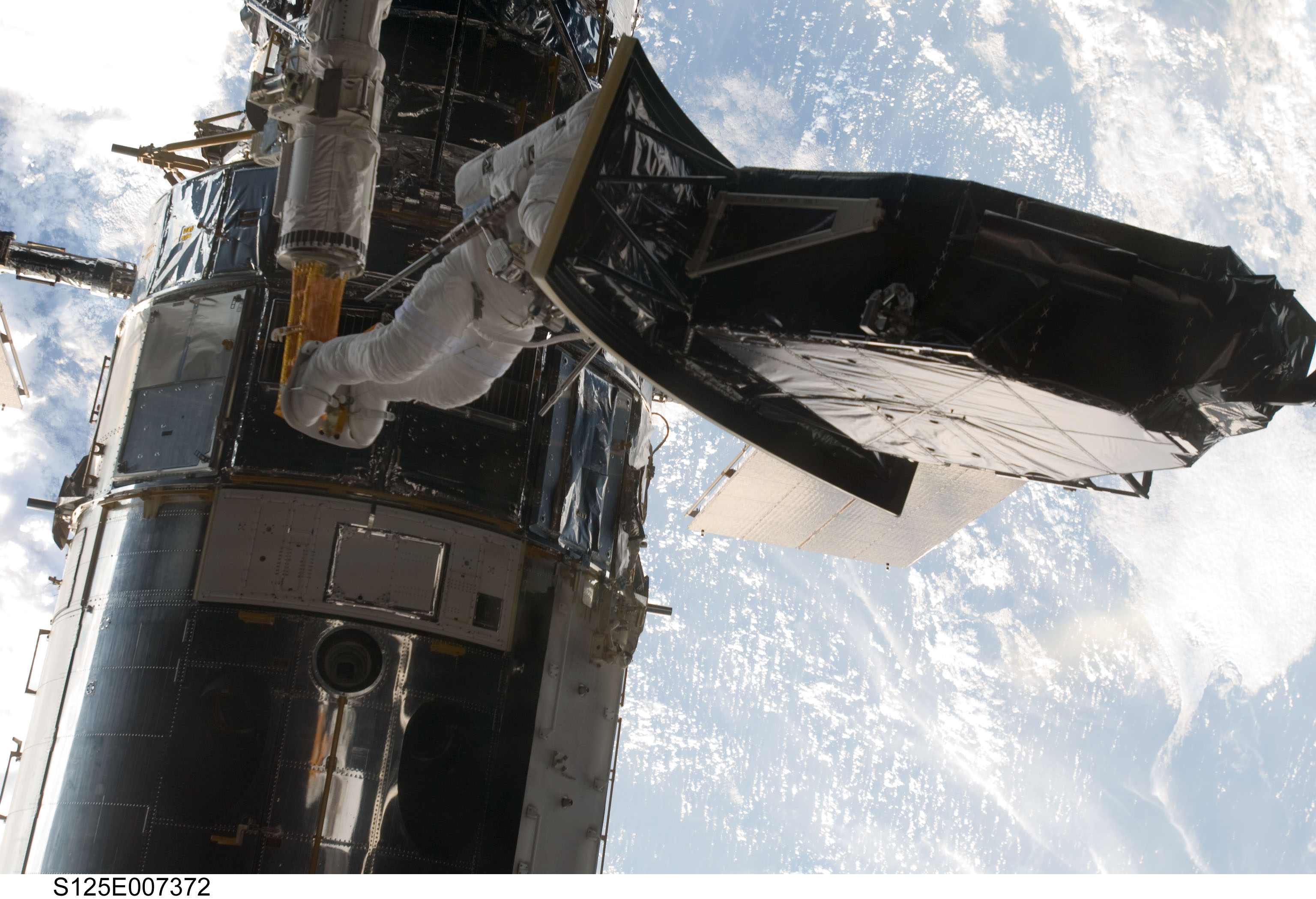 Astronaut Andrew Feustel wrangles the Wild Field and Planetary Camera 2, which he, along with John Grunsfeld, replaced with the new Wide Field Camera 3 (WFC3) during the first spacewalk of the servicing mission on May 14, 2009. Since its installation, the WFC3 has imaged a variety of targets from distant galaxies to moons circling other planets in our solar system. Credits: NASA

The day after Massimino’s brute-force approach led to a successful fix of the Space Telescope Imaging Spectrograph, the team geared up to finish repairs on the telescope. Grunsfeld and Feustel replaced a nickel-hydrogen battery pack and installed a fine guidance sensor, which locks onto guide stars and points the telescope toward the right celestial features. Despite the delays, the fifth mission to service Hubble was a success.

On Jan. 1, 2019, the New Horizons spacecraft zipped by a snowman-shaped Kuiper Belt object dubbed Ultima Thule. It was a revelatory encounter — Ultima Thule was the most distant celestial object ever explored up close.

Since the fifth repair mission, the telescope has made over 1.4 million observations, located distant swirling galaxies and plotted pockets of dark matter. Analysis of Hubble’s images even help earned scientists the Nobel Prize in 2011 for discovering that the rate that our universe is rapidly accelerating. In short, when Earth has questions, Hubble answers.

Together, millions of experts and enthusiasts have peered through Hubble out across the stars. A patchwork of incredible images and groundbreaking observations have sewn together a tightly knit history of the universe, binding Earth to its cosmic neighbors. “Hubble brought the universe to the front page of the newspaper,” said Griffin.

But the telescope is far from finished.

“We still have full redundancy in all of the spacecraft’s critical systems,” said Dunham. “It’s just unbelievable that we’re still going today.”