The latest GOP effort to repeal and replace “Obamacare” was fatally wounded in the Senate Monday night when two more Republican senators announced their opposition to the legislation strongly backed by President Donald Trump.

The announcements from Sens. Mike Lee of Utah and Jerry Moran of Kansas left the Republican Party’s long-promised efforts to get rid of President Barack Obama’s health care legislation reeling. Majority Leader Mitch McConnell announced that he will retreat, and try to pass the more straightforward Obamacare repeal bill that Republicans approved while Obama was still in office and certain to veto it. That looks unlikely to succeed now that it could actually become law and unleash wide-ranging effects likely to frighten off senators.

“Regretfully, it is now apparent that the effort to repeal and immediately replace the failure of Obamacare will not be successful,” McConnell said in a statement that sounded like a death knell to the GOP’s promises to repeal Obamacare and replace it with something better.

Trump, who had predicted success for McConnell’s repeal-and-replace legislation just hours earlier, urged over Twitter: “Republicans should just REPEAL failing ObamaCare now & work on a new Healthcare Plan that will start from a clean slate. Dems will join in!” But Republican leaders rejected that clean-repeal approach months ago because it could not pass Congress. 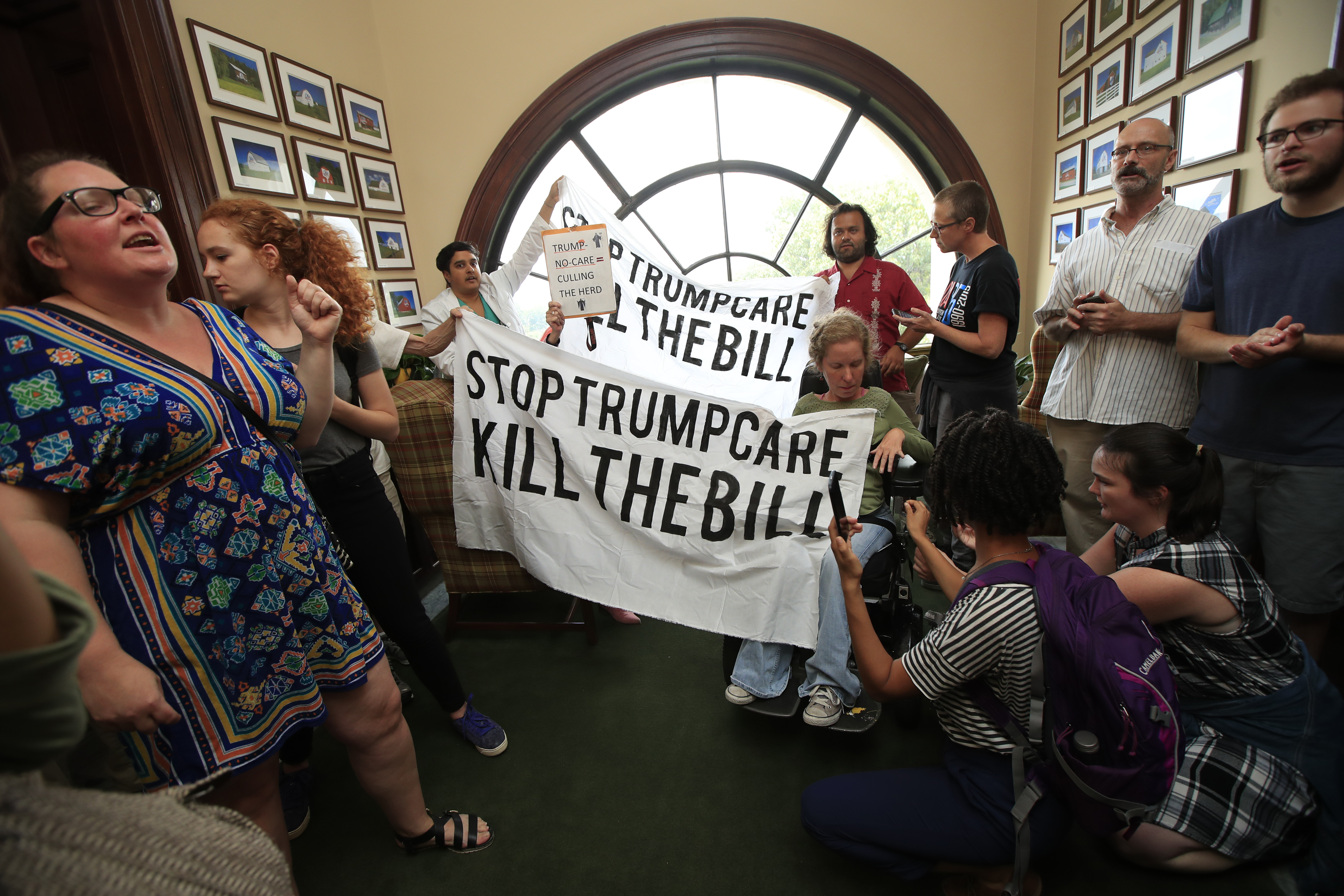 Lee and Moran both said they could not support McConnell’s legislation in the form unveiled last week. They joined GOP Sens. Susan Collins of Maine and Rand Paul of Kentucky, both of whom announced their opposition right after McConnell released the bill on Thursday.

Lee said, “In addition to not repealing all of the Obamacare taxes, it doesn’t go far enough in lowering premiums for middle class families; nor does it create enough free space from the most costly Obamacare regulations.”

That left McConnell at least two votes short in the closely divided Senate from being able to move forward with his bill. Instead he said he would try to open debate on a repeal-and-replace bill passed by the House, and the first allowed amendment would be on the legislation approved by Congress in 2015 repealing much of Obamacare, with a two-year delay for the repeal to take effect.

Obama was in the White House when that bill passed, and he vetoed it. Few Republicans reckoned then with the reality of sending the bill to a president of their party who might actually sign it and invite all the consequences, including casting tens of millions off the rolls of the insured and off of Medicaid. This year’s debate has already shown Republicans are highly wary of any such move, and a similar straightforward repeal was rejected early on.

Monday night’s retreat was the second straight failure for McConnell, who had to cancel a vote on an earlier version of his repeal-and-replace bill last month when defeat became inevitable.

Trump had kept his distance from the Senate process, but Monday night’s development was a major blow for him, too, as the president failed to rally support for what has been the GOP’s trademark issue for seven years, ever since Obama and the Democrats passed the Affordable Care Act. Republicans won the White House and full control of Congress in large part on the basis of their promises to repeal and replace “Obamacare,” but have struggled to overcome their deep internal divisions and deliver on those promises.

The Senate bill, like an earlier version that barely passed the House, eliminated mandates and taxes under Obamacare, and unraveled an expansion of the Medicaid health care program for the poor and disabled. For conservatives like Lee and Paul, it didn’t go far enough in delivering on Republican Party promises to undo Obama’s law. But moderates like Collins viewed the bill as too extreme in yanking insurance coverage from millions.

McConnell’s latest version aimed to satisfy both camps, by incorporating language by Sen. Ted Cruz of Texas allowing insurers to sell skimpy plans alongside more robust ones, and by adding billions to treat opioid addiction and to defray consumer costs. His efforts did not achieve the intended result.

“This second failure of Trumpcare is proof positive that the core of this bill is unworkable,” said Senate Minority Leader Chuck Schumer of New York. “Republicans should start from scratch and work with Democrats on a bill that lowers premiums, provides long term stability to the markets and improves our health care system.”

Some Republicans, including Sen. John McCain of Arizona, also called for a new bipartisan approach, but McConnell opted to go in the other direction. One outcome could be to prove to conservatives agitating for a repeal-only vote that such repeal-only legislation cannot pass the Senate.

Prior to the stunning announcements from Lee and Moran, the GOP bill stood on the knife’s edge, with zero votes to spare but not dead yet. It was apparent that no GOP senator wanted to be the third to announce opposition and become responsible for killing the bill, so the news from Lee and Moran came simultaneously.

It arrived as about a half-dozen senators were at the White House meeting with Trump and Vice President Mike Pence about the next steps in the GOP effort to ensure passage of the bill.