From making prosthetics to prototyping a robot, 3D printing technologies are making concepts a rapid reality for today’s warfighter, on demand.

“We are on the ground floor of 3D Printing,” NSWCDD Technical Director Dennis McLaughlin told 100 participants at a 3D Print-A-Thon here in December when 3D Printing experts revealed the technology’s capabilities and design guidelines.

“We need to move past the trinket stage and come up with examples that senior leaders can see,” said McLaughlin. “Let’s come up with ideas for what else we can do.”

Scientists and engineers, who were provided with the 3D Printing tools to experiment at the event, responded with innovative ideas to benefit the warfighter, and the response is ongoing. 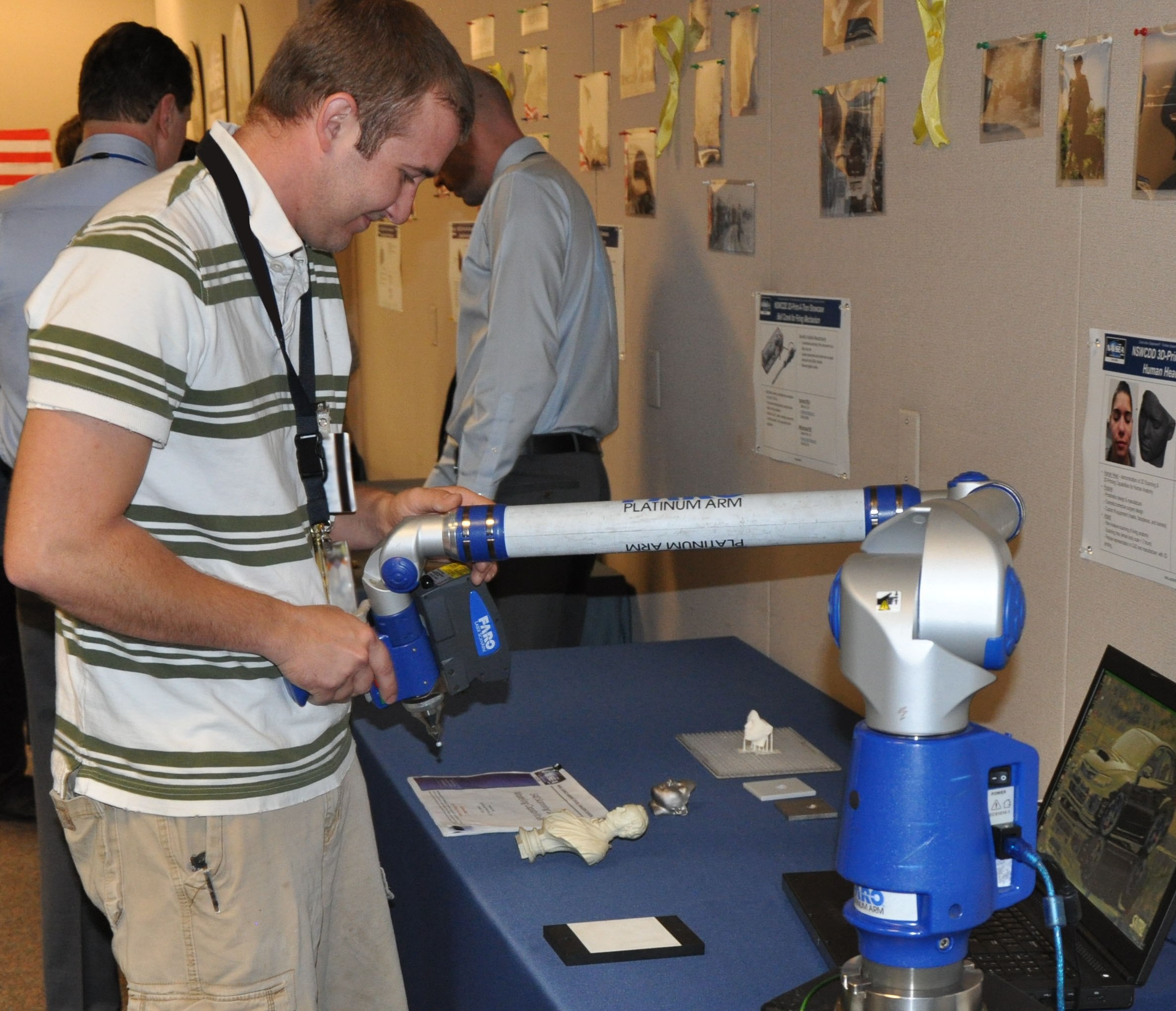 They are using a 3D Printing device that significantly reduces production time, allowing rapid deployment of equipment part replacements back to the field.

For example, Print-A Thon attendees saw a replica of a warship’s command center design console and a low-fidelity 3D model used to gather input on layouts from the fleet on both coasts.

Due to the portable, lightweight nature, the models are reused over an extended amount of time, significantly reducing hours required to create small scale mockups by hand. Being able to 3D print the components also saves a considerable amount of labor as more durable models are produced.

Another example of rapid 3D development is the rapid prototype HexaPod Robot, which is in the early research and development phase. The robot could provide several advantages to the warfighter such as low-power movement through difficult terrain, considering its small, covert, low-profile heat signature. Engineers can transition a concept to full prototype in four weeks as compared to three to four months without 3D technology.

Just 12 hours before the event, engineers decided the robot was too heavy, so they quickly remanufactured the base and top, reducing the weight from 2.65 kilograms to 2.06 kilograms. This is reflective of the bright future 3D printing holds for the warfighter.

“The ability to move additive manufacturing into the field would allow for equipment to be made on demand, reducing the overall footprint on the ground and dramatically increasing flexibility,” said Jason Phillips, an NSWCDD engineer in the Disruptive Technologies branch.

NSWCDD is also realizing the benefits of reproducing human anatomy thanks to 3D Printing. Minimal effort is needed to fabricate complex human features such as a human head.

At the Print-A-Thon, Kevin Streeff, instrumentation engineer, demonstrated how a laser tracking camera would be used to define a head. In real-time as the head of a plastic bust was scanned, a digital version appeared on the computer screen to set the stage for printing. A whole body scan can be completed in less than two hours.

These innovations were among 10 featured at the Print-A-Thon.

“We have a suite of varying 3D capabilities across the base,” said Ricky Moore, lead mechanical engineer for NSWCDD’s Disruptive Technologies Branch. “We are developing lessons learned with regard to fabrication and design.”

In his 2013 State of the Union Address, President Barack Obama called 3D printing a technology with the “potential to revolutionize the way we make almost everything.” The Department of Defense has been a leader in utilizing 3D printing to save time and money. With origins dating back to the 1970s, 3D printing contrasts traditional manufacturing by adding, instead of subtracting, substances such as metals or plastics to create an object.

For almost a decade, NSWCDD has employed additive manufacturing to reduce development time, but the focus on solving fleet problems began in 2013 when CDSA Dam Neck – in conjunction with CNO’s Rapid Innovation Cell – initiated the Navy’s consolidated effort to bring 3D printing to fleet sailors.

The Navy’s first-ever “Print-the-Fleet” was hosted by CDSA in June 2013 to raise fleet awareness of Additive Manufacturing and provide an understanding of how 3D printing can solve fleet problems. This two-day event also provided Navy Additive Manufacturing professionals first-hand feedback from Sailors on what they would like to see printed.