The annual Additive Manufacturing Users Group (AMUG) Conference just wrapped up this week in St. Louis, where some rather innovative and groundbreaking 3D technologies were displayed and introduced. With an abundance of new products exhibited at the conference, PD&D combed through every display and booth to bring you the four hottest 3D printing technologies from the event. 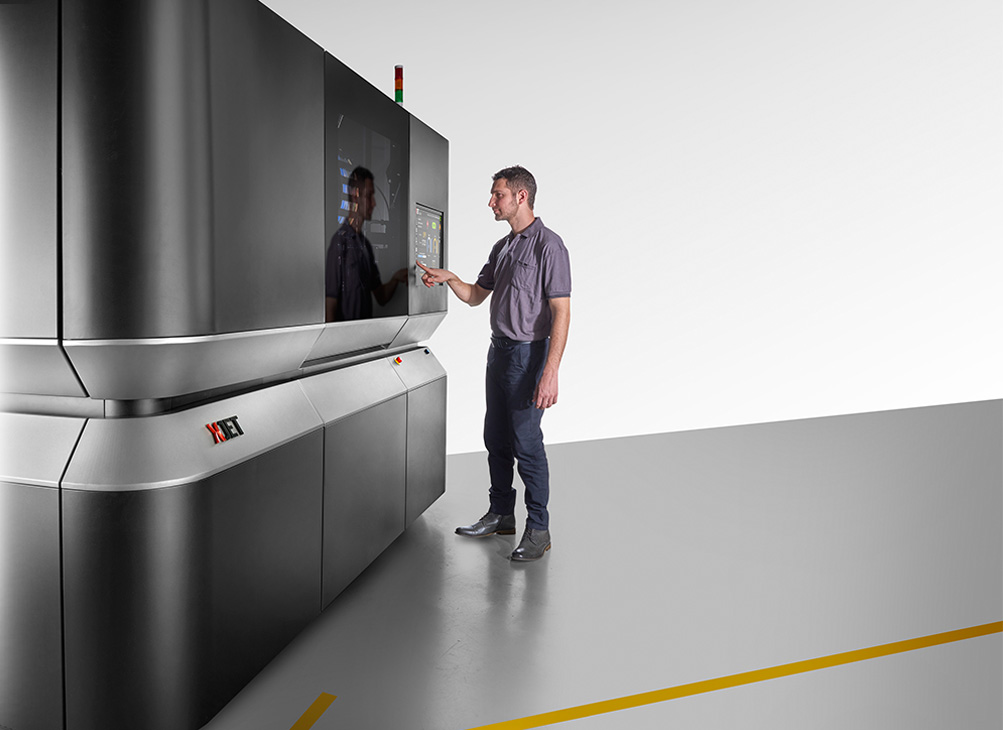 One of the largest crowds at AMUG gathered for XJet Chief Business Officer Dror Danai’s announcement of the company’s latest technology. The greatly anticipated technology, called NanoParticle Jetting, is a metal additive manufacturing process that uses ink jetting technology instead of lasers.

The XJet system uses nano-sized metal particles suspended within the company’s patented liquid formula, which can be jetted from standard printing heads. The heat inside the chamber will evaporate the liquid, leaving only the metal part.

These metal materials are packaged within specially adapted cartridges that are loaded into the XJet system, meaning the operator won’t have to handle metal powders. Plus, because there’s no powder vat the system only uses the materials that the user needs.

Danai also described a separate, currently embargoed, material that is melted away in a second process, which also acts as the sintering of the part. This means that XJet can provide incredible wall thickness for metal 3D printing, as well as more geometric design freedom. Danai went on to explain that the inkjet printing process deposits 221 million droplets per second – meaning the machine is up to five times faster than laser metal printers.

While the company currently has seven machines operating with the new technology in their Rehovot, Israel headquarters, it will not officially be unveiled until RAPID 2016, to be held from May 16-19 in Orlando, Fla.

Next up on the list of streamlining technologies is the latest addition to 3D Systems’ line of Multijet Printing (MJP) 3D printers. Announced on day two of AMUG, the ProJet MJP 2500 Series looks to deliver an engineering solution suitable for in-office operation. The 3D printer uses the company’s new MJP Easy Clean System, offering hands-off, chemical-free finishing without the need for waterlines or any special disposal consideration.

According to system beta tester Nike, the new machine allowed them to print complex geometries that were previously impossible on other printers in its class. Plus, the consistency of parts and hands-off post-processing provided Nike’s team with more time to accomplish other tasks throughout the day.

As many of you may know, Stratasys unveiled its most advanced 3D printer, the J750, on April 4. The multi-material, multi-color 3D printer is designed to transform the product development cycle. Although the printer is not the world’s fastest, it does work with a palette of six materials and offers an astounding 360,000+ colors to choose from.

Using the new PolyJet Studio software, the printer can build concept models, whole product prototypes, and tooling on one system. The ability to mix-and-match full-color gradients alongside a range of materials provides one-stop realism without post-processing. Even though these parts aren’t intended for end-use cases, they appear to be some of the most accurate prototypes currently in the market.

According to the company’s CEO, Joseph DeSimone, the printer is capable of producing high resolution functional prototypes and production quality parts. The photochemical process carefully balances light and oxygen by projecting light through an oxygen-permeable window into a reservoir of UV-curable resin. Then, as a sequence of UV images are projected, the part solidifies and the build platform rises.

During a media session at AMUG, Kirk Phelps, Carbon VP of Product Development commented that the M1 is the “best of SLA & FDM in one machine,” and that “if you combine those two properties, you can create an end use part.”

And, boy, does the machine print well! The prints on display in the Carbon room at AMUG ranged from squishy elastomers quickly printed to finely-detailed, hard plastics. CLIP enables 3D printing with novel classes of polymers, including complex chemistries such as polyurethane and cyanate ester-based resins. This means the printed materials are tough, resilient, isotropic, and machinable.

The company announced that the M1 will feature a unique subscription-pricing model. With an annual subscription, member companies will have access to a service team that will be hands-on and address any of their concerns, in addition to providing continual updates to the hardware. The undeniably innovative company is sure making a name for itself in the 3D printing industry!

What are your thoughts on the four 3D technologies listed above? Which do you think is the most groundbreaking? Share your thoughts by commenting below, tweeting me @kaylieannduffy, or emailing Kaylie.Duffy@advantagemedia.com.