In January 2016, NewAge Industries will note a milestone—10 years as an employee-owned company. The share price of the company’s Employee Stock Ownership Plan (ESOP) has increased over six fold since the plan’s inception.

When asked if he had ever thought NewAge would be in its current position as an ESOP, Ken Baker, CEO, said, “Absolutely. Back in 1985, I told one of our employees that if he worked hard, we would take care of him. At that time, I didn’t know it would be in the form of an ESOP, but that employee just retired and will be receiving a substantial amount of money, all thanks to the ESOP.”

John Stover, former Director of Product Management, started with the company in August 1978 and retired Dec. 31, 2015. Stover noted that Baker followed through on his vision for the company and has gifted not only NewAge’s employees but their families as well.

“It’s another layer of security for my family,” said Stover. “The owners of this company took a bold step…letting their employees become owners and sharing in the profits and success of the company.”

Because team members are owners, most have a different perspective on the business.

Cinthya Quispe, an Industrial Engineer and a one- 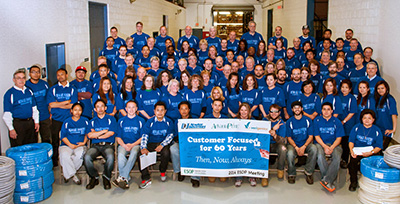 year employee, said that, to her, “the ESOP is a great benefit. It inspires us to work harder for the company and be proud of our performance.”

“Before NewAge, I had no idea what an ESOP was,” said 10-year team member Joel DeVine, Quality Control Inspector. “I look at our business differently now. I’m more critical and focused on the customer’s needs and the quality of products, since they have a direct effect on my career and potential retirement. As an owner, I want to make sure that we continue to exceed the customer’s expectations.”

NewAge holds an annual ESOP meeting in the spring each year, where team members/shareholders learn details relating to share value and allocation, payments to retirees, dividends, plan expenses and cash value. There’s even a “Guess the Share Price” contest each year with a prize for the team member with the closest guess.

“Selling part of the company to the employees, at no cost to them, had been in the works for several years before it actually happened,” said Baker. “A lot of research went into the type of ESOP we would use, setting it up and educating employees.”

When the ESOP was initiated, Baker sold 30% of the company to its employees. NewAge Industries’ team members now own 40% of the company, and Baker’s goal is to eventually become 100% employee-owned.