Mechatronic challenges come in some interesting packages. One such test, within the field of medicine, is finding an easier way to move hospital patients who cannot move themselves. In the past, patient transfer, as it is referred to in the healthcare industry, has been a mix of back boards, lifts, hoists, and, invariably, groups of people getting together to help move the patient. 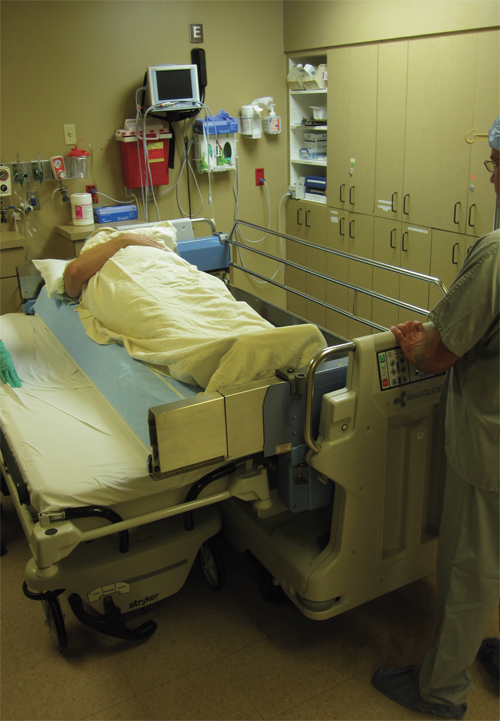 Regardless of the circumstance, if a patient is unconscious, injured or otherwise debilitated, moving from the hospital bed to a gurney—then to a surgery table and back again—can be a very complicated process. It is difficult for the patient and for the hospital staff. Due to the OSHA mandated 35-lb lifting limit, most patient transfers require from 4 to 6 employees to help. In actual practice, the OSHA limit is routinely exceeded by healthcare personnel. The physical strain is made worse because workers are leaning over in very non-ergonomic positions.

Clearly, having 4 to 6 medical employees involved in moving patients is not cost-effective. A better patient handling solution would help to reduce healthcare cost and improve efficiency across the industry. In addition, an effective patient transfer solution can prevent injuries to healthcare workers who are often experienced on the job. Moving a patient under the best of conditions can put 1000-lb of stress on the lower back of a nurse.

As the number of obese people has increased, patients weighing 300 to 500 lb are encountered more frequently. In these situations, the physical stress on the workforce goes up proportionately. Currently, studies show that 40-50% of all nurses experience back injuries. Healthcare employees rank as the workforce with the highest incidence of back injury. The medical industry estimates that direct and indirect costs of low back injuries cost $20 billion a year.

How it started
Seven years ago, inventor Wilbur Foster was working with a doctor to create an improved solution for moving patients. The early version was a lifting winch on wheels, much like an engine hoist used by mechanics. Ralph Smucker founded Mediglider after becoming involved in the development of the original concept. The problem was made more personal when a family member who was a professional nurse was injured on the job and then forced to retire from nursing. They made it their mission to create a self-powered system that would eliminate the risk of injury in patient handling.

The Mediglider is a masterpiece of mechatronic finesse. Like a purely electric vehicle, the main motive power is provided by AGM (advanced glass mat) sealed lead acid batteries. Sealed lead acid batteries do not outgas and cannot leak battery acid in the event the battery tips over. This provides an added degree of safety for operation in proximity to human beings. In addition, the batteries are deep cycle, like a fork lift battery, so they will reliably discharge and recharge over a wider range and over many more cycles than a typical starting battery in a car. The system is designed to operate for up to 16 hours a day and recharge in 6 to 7 hours. Battery life in the Mediglider patient transfer system is expected to be 3 years at 50 transfers per day. Mediglider also offers an 8-stage battery charging system to maximize the life of the batteries. 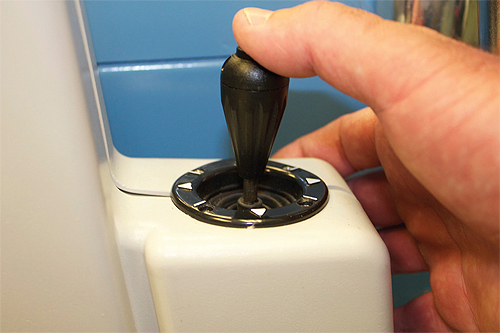 The motive power to move the Mediglider and patient is provided by two brushless synchronous DC gearmotors driving retractable drive wheels on the ground. The retracting feature of the drive motor mounting system allows the caregiver to push the unit manually, if needed. The unit rolls on passive double tire castors, which give it much smoother operation and stability than the traditional single tire castor. The drive system is designed to move the patient at 2 miles per hour. The unit will operate on inclines up to 10°.

Creating a steering system with the necessary flexibility is its own mechatronic challenge. The steering is powered by a single brushless motor. Through a simple sprocket and chain drive system, the powered rollers are able to rotate in synch so that the unit can corner easily through hallways. The powered rollers can be turned to 90° from the direction of the gurney, allowing it to be positioned precisely alongside of the patient bed. This added articulation is critical in the unit’s ability to pick up and drop off patients in tight spaces.

The steering control is a simple joystick with an automatic brake feature that the operator can override if needed. To make the system even more flexible, there are operator controls at both ends of the unit so it doesn’t have to be turned to push the patient after they are picked up. The overall control system uses hard logic and membrane switch touch controls instead of a computer and touch screen interface This approach avoids issues of software system reliability that would normally be a problem in an automated piece of equipment where there is human contact.

Patient transfer
A particularly difficult element, and the subject matter of the Patented “Glide Science” technology, the actual “transfer” part of the system is like a backboard that has two large belts on it that are the length of the board. One belt is on top and one on the bottom, rotating in opposite directions. This arrangement allows the table to slide under the patient and move across the bed under the patient.

The magic of this arrangement is that the belts are moving at the same speed as the table, so there is no apparent motion sensed by patient. If the belts were moving at a different speed than the table, the patient would be subjected to pulling that could result in injury, sometimes called “skin shear.” Also, by inserting the table between the patient and the bed, the patient’s full weight is not being suspended, so the motion can be accomplished using two modestly sized rack-and-pinion slide mechanism at either end of the table.

The powered belts are each operated using only two 42mm brushless dc servo motors and planetary gear reducers per belt. Since the speed of belt is very slow, high reduction ratios provide significant mechanical advantage. In spite of their small size, there is more than enough power to slide in under the patient. The small motor and gearhead diameter also makes it possible to package the drive mechanism for the belt in an extremely low profile which enhances the transfer that the patient experiences.

There is a complete pneumatic system that inflates a pad—this lifts the patient and enhances patient comfort during transfer. The integration of the pneumatic system and its pump, valves and controls adds a unique element to the mechatronic nature of the solution.

The future of patient handling
California, New York, Illinois and Minnesota are among a number of states that have “safe patient handling” provisions to protect healthcare workers. Most of this legislation involves mandating the creation of committees to review workplace procedures. Many provisions simply restrict healthcare workers from lifting more than 35 lb. This only leads to large teams to move patients, increasingly costly and inefficient.

None of the legislation really makes it any easier to move a hospital patient from one bed to another, but this product really does.

The Mediglider patient transfer system is the subject of almost a dozen issued Patents and Patent applications and has completed NEMKO and CSA certification testing. You can see video of the Mediglider in action on the company website.