Imagery and an animation of infrared imagery from the AIRS instrument aboard NASA’s Aqua satellite showed the movement of cold, Arctic air over the U.S. from Dec. 1 to Dec. 11. That frigid air mass is expected to affect states from the north central to the northeastern and Mid-Atlantic. 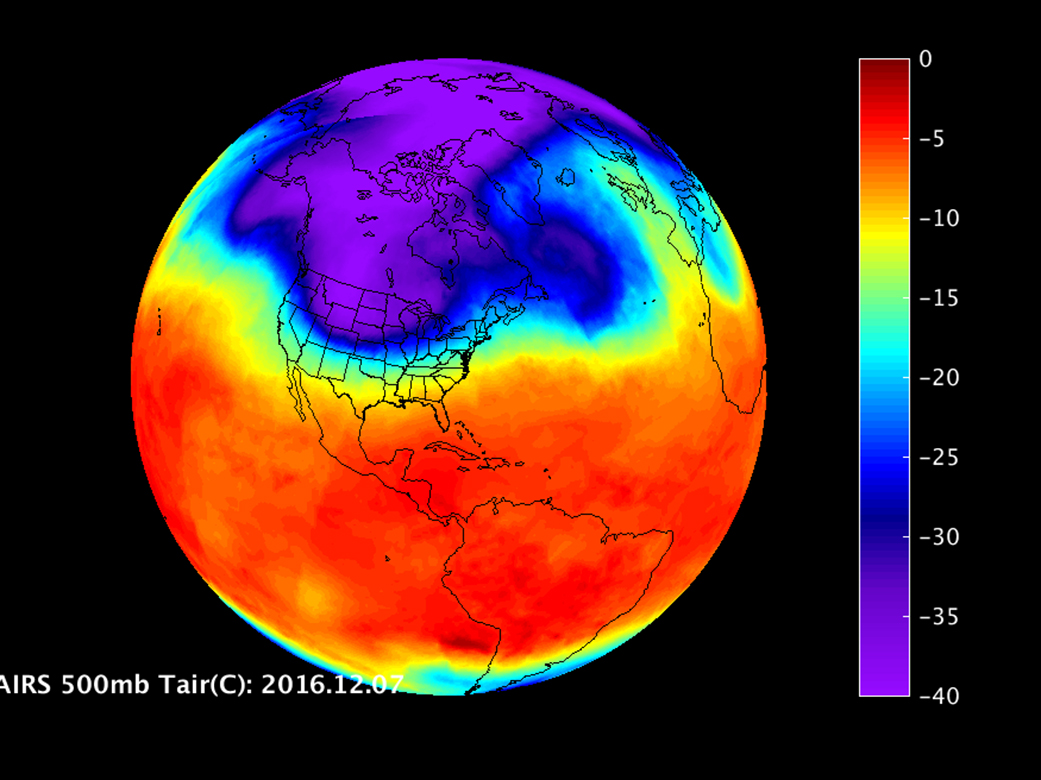 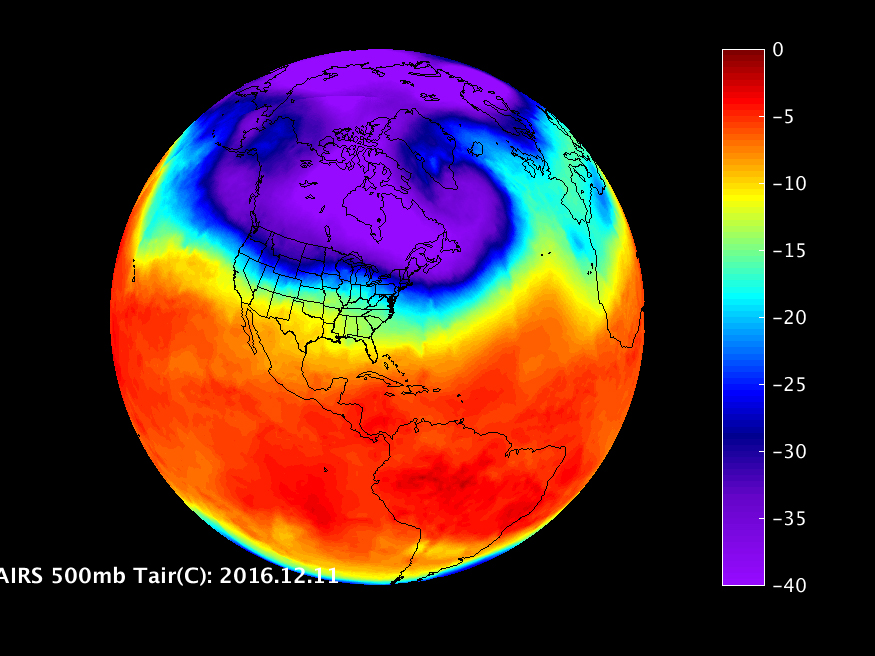 On Dec. 11 another trough of cold air (dark blue) was sweeping down from Canada into the northern plains and is expected to bring very chilly temperatures to the U.S. East coast from New England to the Mid-Atlantic on Dec. 12 and 13. (Credits: NASA JPL, Ed Olsen)

The Atmospheric Infrared Sounder or AIRS instrument measures temperature data in infrared light. At NASA’s Jet Propulsion Laboratory in Pasadena, California, a series of AIRS images and an animation were created to depict the temperature of air at heights of 500 millibars. Temperatures at that level of the atmosphere were as cold as or colder than minus 30 degrees Celsius (minus 2 degrees Fahrenheit). 500 millibars is about 18,000 feet or 5,500 meters high. A millibar is a unit for measuring air pressure.

The animation of AIRS imagery showed the cooler temperatures in darker blue and warmer temperatures in dark orange. The edge of the blue indicated the border of the cold air. On Dec. 7, cold arctic air descended into the Plains states and reached Colorado, Kansas and Missouri. That cold air shifted east on Dec. 9 into the Ohio Valley and New England. On Dec. 11 another trough of cold air was sweeping down from Canada into the northern plains and is expected to bring very chilly temperatures over the north central and northeastern U.S. on Dec. 14 and 15..

On AIRS 500 millibar imagery, generally, warmer than average temperatures can be found under ridges where the curve lifts northward. Colder temperatures can be found under troughs, or where the front dips toward the southward. These maps give a large-scale picture of the weather pattern over the continental United States and North America. The 500 millibar maps are useful in examining winter weather patterns between about 30 degrees and 60 degrees latitude.

NOAA’s National Weather Service’s Weather Prediction Service in College Park, Maryland noted in their forecast discussion on Dec. 13, “An arctic air mass will produce wind chills of minus 20 degrees Fahrenheit or colder across the northern Plains over the next few days. This arctic air will move down the Plains and into the Ohio and Tennessee Valleys into the mid-Atlantic and northeast by the end of the week.”