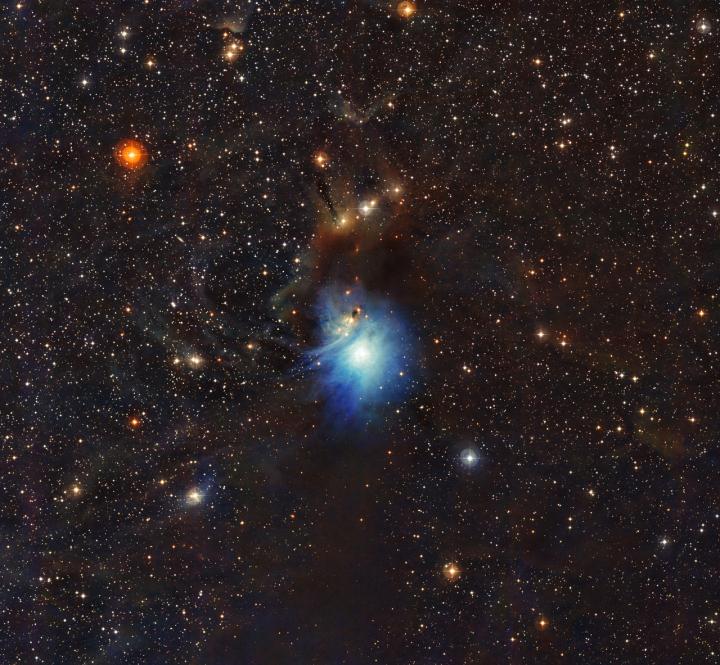 A newly formed star lights up the surrounding cosmic clouds in this image from ESO’s La Silla Observatory in Chile. Dust particles in the vast clouds that surround the star HD 97300 diffuse its light, like a car headlight in enveloping fog, and create the reflection nebula IC 2631. Although HD 97300 is in the spotlight for now, the very dust that makes it so hard to miss heralds the birth of additional, potentially scene-stealing, future stars. CREDIT ESO

The glowing region in this new image from the MPG/ESO 2.2-metre telescope is a reflection nebula known as IC 2631. These objects are clouds of cosmic dust that reflect light from a nearby star into space, creating a stunning light show like the one captured here. IC 2631 is the brightest nebula in the Chamaeleon Complex, a large region of gas and dust clouds that harbours numerous newborn and still-forming stars. The complex lies about 500 light-years away in the southern constellation of Chamaeleon.

IC 2631 is illuminated by the star HD 97300, one of the youngest — as well as most massive and brightest — stars inits neighbourhood. This region is full of star-making material, which is made evident by the presence of dark nebulae noticeable above and below IC 2631 in this picture. Dark nebulae are so dense with gas and dust that they prevent the passage of background starlight.

Despite its dominating presence, the heft of HD 97300 should be kept in perspective. It is a T Tauri star, the youngest visible stage for relatively small stars. As these stars mature and reach adulthood they will lose mass and shrink. But during the T Tauri phase these stars have not yet contracted to the more modest size that they will maintain for billions of years as main sequence stars .

These fledging stars already have surface temperatures similar to their main sequence phase and accordingly, because T Tauri-phase objects are essentially jumbo versions of their later selves, they look brighter in their oversized youth than in maturity. They have not yet started to fuse hydrogen into helium in their cores, like normal main sequence stars, but are just starting to flex their thermal muscles by generating heat from contraction.

Reflection nebula, like the one spawned by HD 97300, merely scatter starlight back out into space. Starlight that is more energetic, such as the ultraviolet radiation pouring forth from very hot new stars, can ionise nearby gas, making it emit light of its own. These emission nebulae indicate the presence of hotter and more powerful stars, which in their maturity can be observed across thousands of light-years. HD 97300 is not so powerful, and its moment in the spotlight is destined not to last.