After launching December 7, 2018, China’s unmanned Chang’e-4 lunar probe made a historic touchdown Thursday, January 3, 2019, becoming the first spacecraft to perform a successful soft landing on the far side of the moon. The mission incorporates an orbiter, robotic lander, and rover.

The recent success resides under a series of robotic lunar missions known as the Chinese Lunar Exploration Program (CLEP, or Chang’e Project) by the China National Space Administration (CNSA), the national space agency of China.

The Dark Side of the Moon

The moon is tidally locked to Earth, meaning it always shows the same face to our planet. The near side of the moon has been our go-to landing zone since it is was better known to scientists, and had an abundance of flat areas. However, the moon’s far side, known as its “dark side,” has no direct line of sight, making the heavily cratered, mysterious region a communication challenge.

To fix this problem, China sent the Queqiao satellite into the moon’s orbit in May. It was positioned to act as a middle man between Earth and the rover, relaying data and commands.

Thursday’s landing occurred 10:26 a.m. Beijing time according to the CNSA via state broadcaster CCTV, landing in the moon’s South Pole-Aitken Basin. That region is the largest and deepest known impact crater on the moon, measuring 2,500 km (1,600 mi) in diameter and 13 km (8.1 mi) deep.

The mission utilizes a slew of instruments, such as descent, terrain, and panoramic cameras; subsurface penetrating radar to identify the moon’s near surface structure; an infrared spectrometer to examine the chemical composition of lunar samples; and scientific payloads, according to eoPortal.

Interestingly, the lander will be sporting a low-frequency radio spectrometer, designed specifically for lunar far-side exploration.

“Since the far side of the moon is shielded from electromagnetic interference from the Earth, it’s an ideal place to research the space environment and solar bursts, and the probe can ‘listen’ to the deeper reaches of the cosmos,” explains Tongjie Liu, deputy director of the CNSA’s Lunar Exploration and Space Program Center, via eoPortal.

Building Toward a World’s First

The Chang’e-4 touchdown was a long time in the making, with the first CLEP spacecraft launching October 24, 2007, according to Statista, which led to the unmanned Chang’e-1 entering lunar orbit November 5 of the same year. Its mission was to create the most accurate 3D map of the moon’s surface to date.

Skipping ahead to 2013, Chang’e-3 and its rover companion Yutu became the first spacecraft to soft land on the moon since 1976, paving the way for the Chang’e-4 world’s first feat.

China isn’t planning on stopping here, announcing ambitions to send the Chang’e-5 lunar lander later this year to collect samples and bring them back to Earth.

You can see a CLEP timeline in the infographic below, courtesy of Statista. 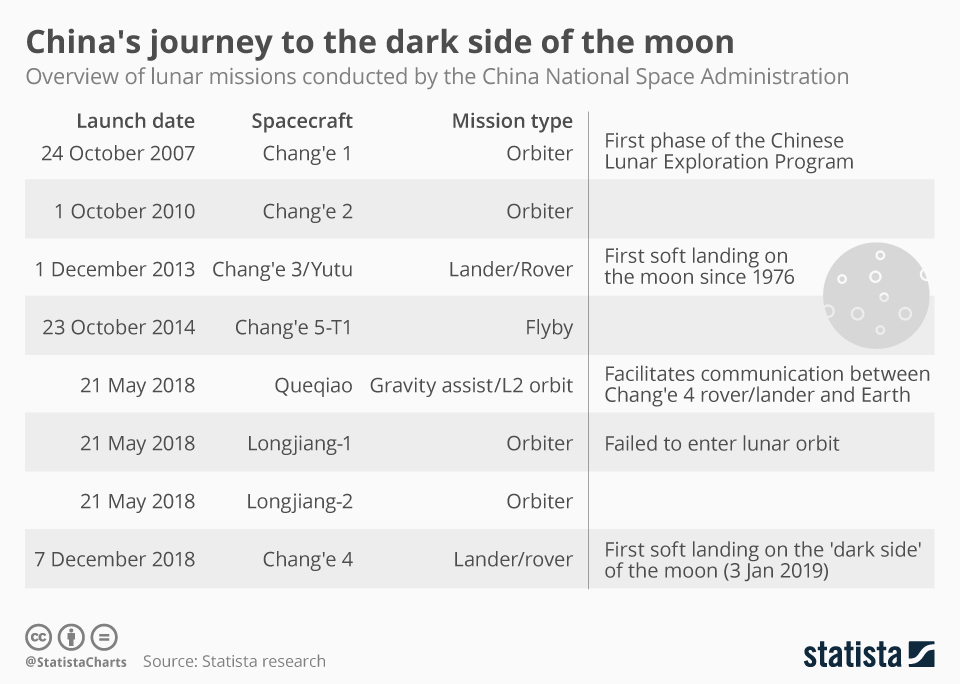