Warning: Attempt to read property "ID" on null in /nas/content/live/designworld/wp-content/plugins/GAMkeywords/gam-keyword-target.php on line 219
 Abortion Procedure Challenged as 'Torture' in Alabama

A commonly used second-trimester abortion procedure would be illegal under a new bill debated in the Alabama legislature on Wednesday. The House Health Committee held a public hearing on a bill that supporters say would prohibit a medical procedure called dilation and evacuation, or “D&E.” The bill would allow the procedure, which it describes as “dismemberment abortion,” in the event of a “serious health risk to the mother.”

Mississippi Gov. Phil Bryant signed a similar bill into law last week, while West Virginia lawmakers overrode their governor’s veto in March to pass a similar law. D&E bans in Kansas and Oklahoma have been struck down by state courts.

Supporters of the bill on Wednesday compared D&E procedures to torture and medieval forms of punishment. “I don’t see how a civilized society could support these barbaric procedures,” said the bill’s sponsor, Republican Rep. Mack Butler. Elizabeth Potter Graham, an attorney who spoke against the bill, said it is a woman’s “fundamental right” to choose the procedure.

D&Es, or surgical abortions, are used in the majority of second-trimester procedures, according to the American Congress of Obstetricians and Gynecologists. 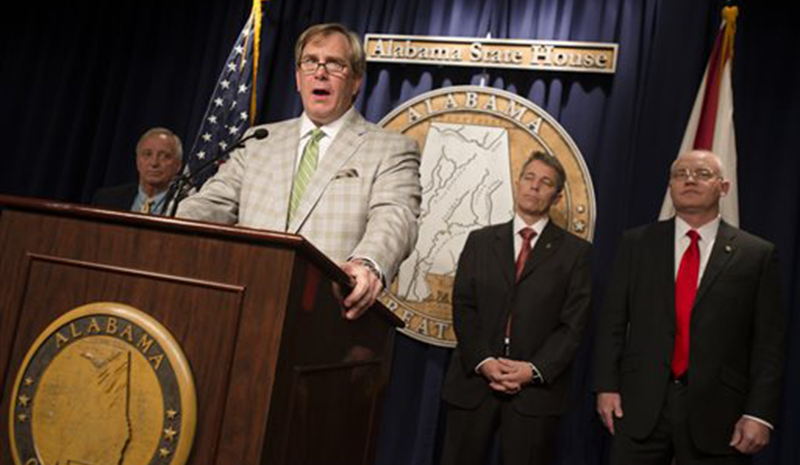 House Minority Leader Craig Ford, D-Gadsden, speaks during a press conference announcing that Rep. Ed Henry, R-Hartselle, center back, will be filing a resolution for Governor Robert Bentley’s impeachment in the Alabama House of Representatives on Tuesday, April 5, 2016, at the Alabama State House in Montgomery, Ala. (Courtesy of the Associated Press)

Butler’s bill does not target medical abortions, which are induced by medication and have higher complication rates than surgical abortions in the second trimester, according to the ACOG. Butler said Wednesday that he believes the bill is a good step toward achieving his ultimate goal, which is to outlaw abortion altogether. Committee members adjourned without a vote, but Butler says he expects them to pass the bill next week.