Suppose you traveled back to the year 1982, found a pinball technician at a bustling arcade, and showed him/her a 2015-era pinball machine. The technician would recognize a familiar sight—hundreds of solenoids, actuators, sensors and lights all connected using bundles of discrete wires to a central control system. That’s because aside from peripheral device improvements—such as replacing incandescent bulbs with LEDs, incrementally upgrading microcontrollers, and adopting updated score display technologies—the core architecture of pinball control systems has been practically frozen in time since the 1980s. The last big change in pinball design was the introduction of electronics in the 1970s.

Technology has marched on. There has been a recent explosion of pinball machine popularity driven by a new generation of casual players, competitive tournament players and seasoned home collectors. Today, companies are finally re-inventing the core architecture of pinball. The reason: a shift in customer demand from single standardized games to a diverse spectrum ranging from simple casual-play games to complex limited-edition collector games.

On the other hand, many industries have reaped rewards from modular embedded network architectures. Stern realized that all pinball machines have a similar set of embedded control problems that could be addressed with inexpensive embedded network systems such as CANbus used in the automotive industry. Thus, embedded network systems looked like a way to address problems of cabling complexity, development speed, I/O count flexibility, part obsolescence protection and overall product cost.

Challenges of central control
Pinball has maintained its popularity for decades in part because it is a real game interacting with the real world. This real-world interaction differentiates the game from video games and is a big reason for its most recent resurgence. Reliable, fast and powerful I/O to the game’s control system is central to the player experience. Every pinball machine has hundreds of inputs and outputs across a wide variety of devices, sensors and lights.

Historically, pinball machines have employed a central fixed I/O board connected to the primary CPU controlled by a custom microcontroller platform running an in-house operating system. For a variety of reasons that include thermal flow, reliability, vibration reduction and serviceability, I/O electronics have been located in the upper backbox of the game, requiring significant custom wiring harnesses to connect the central I/O board to the playfield devices.

A typical pinball machine I/O mix is quite diverse. It includes 16 to 24 outputs for driving solenoids, motors, electromagnets and other mechanical devices in the game. These devices can draw up to 500 W momentarily and operate at voltages up to 50 Vdc. There is also individually controlled lighting that consists of 64 to 96 individually addressable lights. Recently developed games have switched from incandescent bulbs to LEDs. And there is general illumination lighting that comprises two or more higher-power light strings connected and controlled in parallel for providing broad illumination to the playfield and backbox artwork. Additionally, 12 to 24 high-impulse lighting outputs, traditionally incandescent but now LED, provide flash effects within the game. Traditionally, these were often controlled by solenoid-level drivers.

Finally, a game typically includes 64 to 96 TTL-level inputs from a variety of sensors such as mechanical leaf switches, optical sensors and electromagnetic sensors. Occasionally extra signal conditioning is necessary to adapt custom sensors, such as eddy sensors, to the system TTL inputs.

The centralized I/O architecture has stagnated in the face of the modern evolution of pinball machines. In the last 20 years, embedded network components and technologies have become a clear winner in cost, performance and development when compared to traditional central I/O system.

Recent trends demand a wider variety of complexity in pinball machines. Three market segments have emerged: casual, low-cost games with simple layouts and accessible rules; location-based games in bars and arcades with intense light shows, deep rules and commercial durability; and a new class of high-end games with many enhanced playfield devices, hours of game play and collector-quality finish. After extensive analysis, it became clear that a modern distributed embedded network architecture would benefit the pinball machine industry as it has other industries. 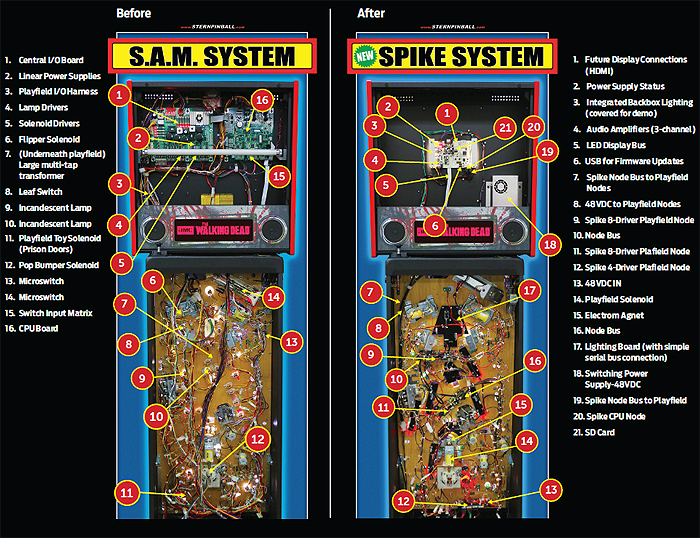 The difference between traditional pinball wiring architecture and modern bus-based systems becomes more clear from a comparison of old and new playfield wiring. Evident on a traditionally wired Walking Dead pinball machine are a beefy playfield I/O wiring harness, a linear power supply, and a substantial transformer for distributing 48-V power to the playfield. In contrast, the same game built with a SPIKE bus eliminates a significant amount of discrete wiring with bus cable from the CPU to the cabinet and other playfield functions. A large, industrial-rated, 48-V power supply routs 48 V to nodes where needed, using inexpensive, onboard dc-dc power supplies to convert to required voltages locally.

The process of deciding how to split a central control system into a multi-node network is challenging. Designers must consider many variables including power supply loading, node I/O count, cost, flexibility and board development time. Too many granular nodes will boost overhead, per-channel cost, network cabling, development time and software complexity. Too few nodes will make I/O count less flexible, entail longer wire runs and make each node more expensive.

Ultimately, engineers at Stern set a target of four to six nodes per game and distributed I/O accordingly. Low-level functions, such as switch debouncing, device fault tolerance, input polling and LED intensity control, are distributed to the nodes. Higher level game functions are processed in the primary CPU node.

The result is a suite of standardized lightweight intelligent nodes that designers choose from when creating their games. A Stern pinball machine based on the SPIKE system has at least two SPIKE nodes networked on the SPIKE node bus, connected with standard 4-pair category 5 UTP (unshielded twisted pair) Ethernet cabling.

SPIKE changes the traditional 48-V architecture of a pinball machine to a system based on bus-power, with a large industrial-rated 48-V power supply routing 48 V to nodes where needed, using inexpensive, onboard dc-dc power supplies to convert to required voltages locally.

SPIKE nodes are lightweight smart nodes that have onboard processors and run embedded code. The nodes are programmed automatically by the CPU node whenever there is a software update. When a node is replaced, the CPU node will detect and update it to the latest software with no user intervention. An example SPIKE node bus from a pinball game called WWE Wrestlemania. The layout consists of a CPU node, a cabinet node that handles the interface for the coin door, start button, flipper buttons, tilt system, game shaker motor, other non-playfield equipment, and other nodes on the playfield for actuators and lights. The bus is extended to handle other I/O as needed.

It is interesting to review the six kinds of nodes found on a SPIKE bus. The six are the CPU node, the cabinet node, 48-V four-driver and eight-driver playfield nodes, a lighting and switch node, and a node extension. The CPU node is a master node that controls other SPIKE bus nodes and runs the primary game software. It contains the primary audio system and backbox lighting system. The cabinet node is a specialized node sitting in the lower cabinet. It handles the interface for the coin door, start button, flipper buttons, tilt system, game shaker motor and other non-playfield equipment. The 48-V, four-driver playfield node can drive four high-power devices like flippers or playfield mechanisms. It controls 16 lights and reads 16 switches. Similarly, the eight-driver version handles eight high-power devices, eight lights and eight switches. The lighting-and-switch node controls 32 lights and 32 switches. Finally, node extensions are simple low-cost boards connected by a simple short-distance serial bus that lets designers expand a node for specific applications.

An embedded pinball network
Every industry has a different set of priorities and requirements for embedded networks, resulting in a wide array of application-specific embedded networks based off of common standard technologies.

The big benefit of a bus structure in a pinball game is I/O flexibility. This enables game designers to incrementally grow or reduce the I/O count resulting in cost-efficient games for both high-end collectors and low-cost casual consumers.

Current and planned games on the SPIKE platform push well past the traditional I/O counts of older games, with more than 128 individually addressed lights, 24 high-power outputs and more than 96 switches, with even higher I/O counts possible. The main limitations are usually related to power dissipation and the number of devices that fit in one game. For I/O, the SPIKE architecture covers most conceivable pinball scenarios going forward.

By separating the CPU from the I/O system and standardizing the I/O on a bus system, the boards can go on separate lifecycle programs. The CPU node will change more frequently as embedded processor, memory and other peripheral technology continues to iterate quickly, while the I/O boards can be maintained on a mature lifecycle program which iterates as parts become obsolete or if design teams need new mixes of I/O. The biggest change in pinball machines involves taking more advantage of the latest software development techniques. Having a platform that facilitates quick iterations while incorporating the latest technologies can greatly improve the development process.

Because the I/O system connects through the SPIKE node bus, designers can easily use more advanced CPUs, software and connectivity techniques that become economical without iterating the rest of the hardware platform.

For example, designers plan to use more advanced, higher-resolution backbox displays with upgraded CPUs in future titles. SPIKE is now built from an embedded Linux stack, so it costs less to add future internet connectivity than would be the case on a custom microcontroller system.

All in all, SPIKE is an exciting development in the pinball world as it represents the first complete redesign of pinball control system architecture in over 20 years. This next-generation technology enables a wider variety of modern pinball machines to evolve more quickly incorporating additional features, more engaging content, better connectivity and lower cost, increasing the momentum of the pinball resurgence that is recapturing the minds of all age groups across the world.