NASA is developing a new type of detector that will provide insight into the formation and structure of the universe. Many of the radiative and mechanical interactions that shape the interstellar medium of galaxies and drive galactic evolution (e.g., shock waves from stellar winds and jets, supernova explosions, etc.) are best observed in the 4.744 terahertz (THz) spectral region for the oxygen line. Observations of this spectral line have rarely been performed, however, because the 4.744-THz frequency is beyond the reach of most existing local oscillators that operate in heterodyne receivers sensitive enough to make such observations. A NASA-sponsored team at Massachusetts Institute of Technology (MIT) is working to advance technologies that will enable upcoming NASA missions to include receivers that observe this important spectral line.

Heterodyne detection compares the incoming light signal with a reference light from a local oscillator (LO). Key challenges of this project are to increase the LO output power from the currently achievable level of <1 mW to 5 mW, and to increase the operating temperature from a lab-demonstrated ~10 K to ~40 K—a temperature that can be accommodated by a space-based or suborbital observatory. To achieve The large circuit board on the left is a previous ASIC design. The three rectangular segments provide three antenna inputs, supporting four 20-MHz channels, and require approximately 5 W of power. To the right is the new ASIC chip. By adding a few small components, such as connectors, it will provide three antenna inputs, with the equivalent of twelve 40-MHz channels, and require only 1 W of power. (Image Credit: Michael Shaw, GigOptics, Inc.) 12 | 2017 SMD Technology Highlights these objectives, the project team is developing local oscillators based on THz quantum-cascade lasers (QCL), which can pump a seven-element heterodyne receiver array. These local oscillators must emit single-frequency radiation with good spectral purity (narrow linewidth <1 MHz at 4.7 THz), which can only be achieved using Distributed-FeedBack (DFB) grating structures. The team investigated three different DFB structures for potential use in the receiver and selected the best option, which has a unidirectional beam pattern (it only radiates in the forward direction) with high output power levels.

A receiver array capable of observing the 4.744-THz frequency will provide new and unique insights into the interrelationship of stars and gas in a wide range of galactic and extragalactic environments. NASA plans to deploy receivers using this technology on the upcoming GUSTO mission (Galactic/Extragalactic Ultralong-Duration Balloon Spectroscopic Terahertz Observatory), a long-duration balloon payload targeted for launch in 2021. The technology also has potential applications for the upcoming Single Aperture Far-Infrared Observatory (SAFIR) mission, a large cryogenic space telescope envisioned as a follow-on to the Spitzer Space Telescope and the Herschel Space Observatory. In addition to astrophysics, THz QCLs will be useful in a wide range of applications in areas such as security, biochemical sensing, and biomedical imaging. 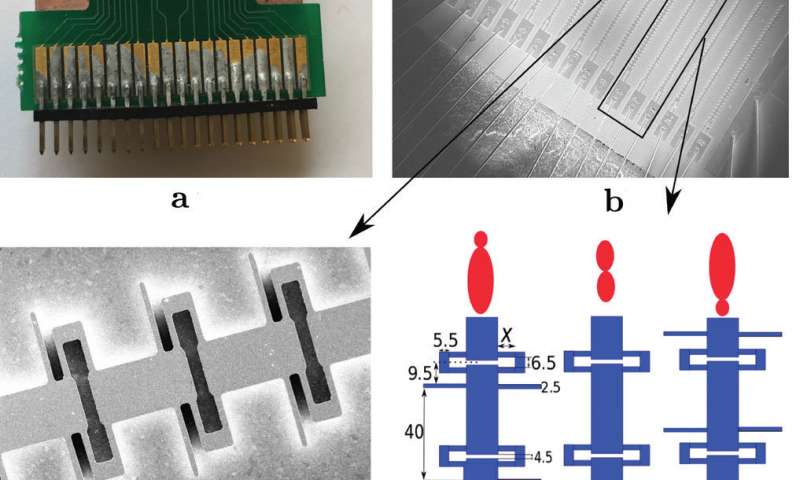 The figure above shows: (a) an array of 3rd-order DFB lasers gold wire bonded to an electronic chip, (b) a photo of a fabricated array of DFB triplets, (c) scanning electron microscope image of a DFB device showing three periods, and (d) a schematic of a triplet with the corresponding radiation profile. (Image Source: NASA)