There’s a rough rule of thumb that’s widely observed in aircraft system design and development: It usually takes at least five years to go from the original concept of a new system to the point at which the FAA issues a Type Certificate, so that an actual aircraft containing the system can be sold to a customer. Bringing a new system to market takes both a broad range of engineering skills and the ability to coordinate the work of multiple groups simultaneously.

A project that involved multiple divisions of one manufacturer, Parker Hannifin Corp., illustrates the staggering complexity of these types of projects. The company was approached by a well-known maker of commercial and executive jets for assistance in developing a new flap control system, including the flap power drive unit (PDU), for its new business jet. Among other functions, flaps are used to increase the lift of an aircraft wing at a given airspeed, lower the minimum speed at which the aircraft can be flown safely, and increase the angle of descent for landing.

“From the onset of this project, various divisions were responsible for everything between the flap select lever in the pilot’s hand to the actuators that actually move the flaps, including the flex shafts, position-sensing devices, and control electronics,” said Ted McKay, one of the principal engineers involved in the project. During the development of the overall flap control system, virtually any change to other components of the system had to be evaluated and tested in terms of how it would affect the performance of the motor under development.

At the heart of the new system was a custom resolver-commutated, inverter-driven brushless dc motor with an integral solenoid-operated power-off parking brake. The system included two of these motors to power the main wing trailing-edge flaps through a speed summing differential. A large pool of engineering talent was drawn upon to design and verify the new flap control system—including three engineers just for the motor, a power transmission specialist, three engineers for the balance of the flap power drive unit, a quality engineering team, and a separate verification team to design test equipment and handle testing.

“After we evaluated the customer’s operating requirements, our magnetic design engineers performed a Finite Element Analysis that helped them customize the size, shape, and materials used in the motor’s magnets. We also looked at very basic things like the gauge of the copper wire used and the number of turns of wire and the lamination material. Although in some ways it could just be considered a standard servomotor, it’s optimized for this precise application,” Nazzaro said.

The design of the motor also had to take into consideration the voltage drops and delays associated with the wires and switches that control the flow of power to the rotating magnetic field.

The job of designing and building the new motor to meet the aircraft manufacturer’s requirements presented Parker’s Electromechanical and Drives Div. in New Ulm, Minn., with a number of engineering challenges. For example, it had to provide the required torque at a very high speed to deliver sufficient power output. After many months of design and development, experimentation, negotiation with other design teams within Parker and with the customer, and “iron bird” testing, each motor provides a maximum speed of 17,000 rpm at 6 in.-lb of torque. This performance needed only 24 Vdc to the motor, and current requirements of no more than 60 amps. This maximum speed falls far outside the capabilities of the company’s standard, off-the-shelf motors, the fastest of which are capable of maximum speeds of just 7,000 rpm.

Many challenges involved the extreme environments in which the motor needed to perform flawlessly, such as in ambient temperatures ranging from -65° to 158° F and under a range of loads, both in flight and on the ground. It also had to meet all commercial aerospace environmental conditions related to electromagnetic interference (EMI) with other nearby components, vibration, duty cycle, and so on.

“At -65° F at 35,000 feet, oil turns to sludge. At the other end of the spectrum, it can be 120°F on the tarmac in Riyadh with the mechanic constantly operating the flaps to try to track down the source of a noise,” said McKay. “The motor we design has to handle both ends of that—we have to have produce enough torque to keep operating at very low temperatures and it can’t overheat over the most aggressive thermal cycles.”

The high efficiency required of this motor made an inherently low cogging torque design essential.

“Our maximum motor output torque requirement was so close to the motor starting requirement that any cogging torque actually would have robbed it of torque needed to get it moving,” said Nazzaro. “New Ulm went to enormous effort to create a motor that didn’t cog.”

Efficiency was also critical because of the relatively low level of power provided by the plane’s internal generation system. The level of power available from the aircraft to drive the motor was just 28 V, 50 A per RTCA DO-160, making high efficiency doubly critical. 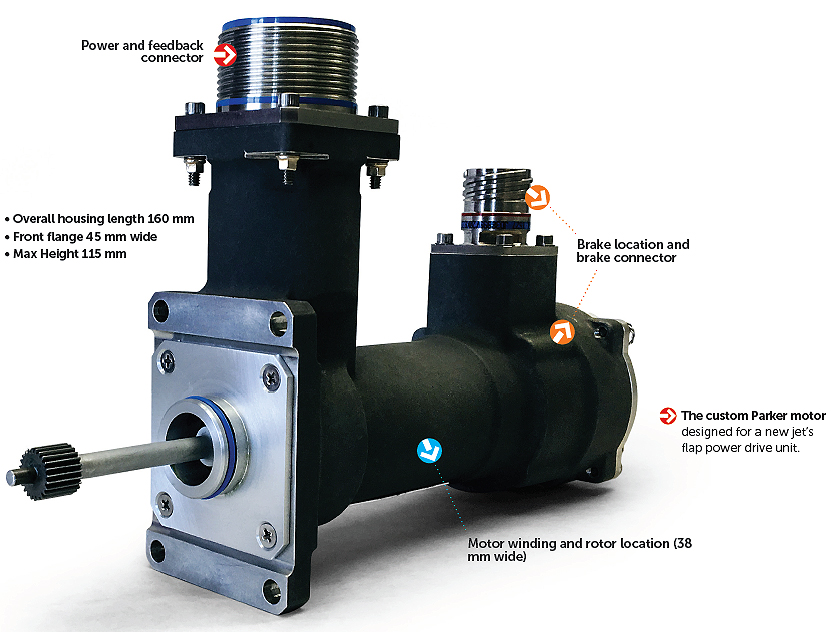 Possibly the biggest challenge the design team faced was creating a powerful motor that could fit into the tight confines of the motor enclosure.

For everyone involved in the PDU motor project, the final motor design represented an important learning experience that they’ve been able to apply to subsequent motor design challenges.