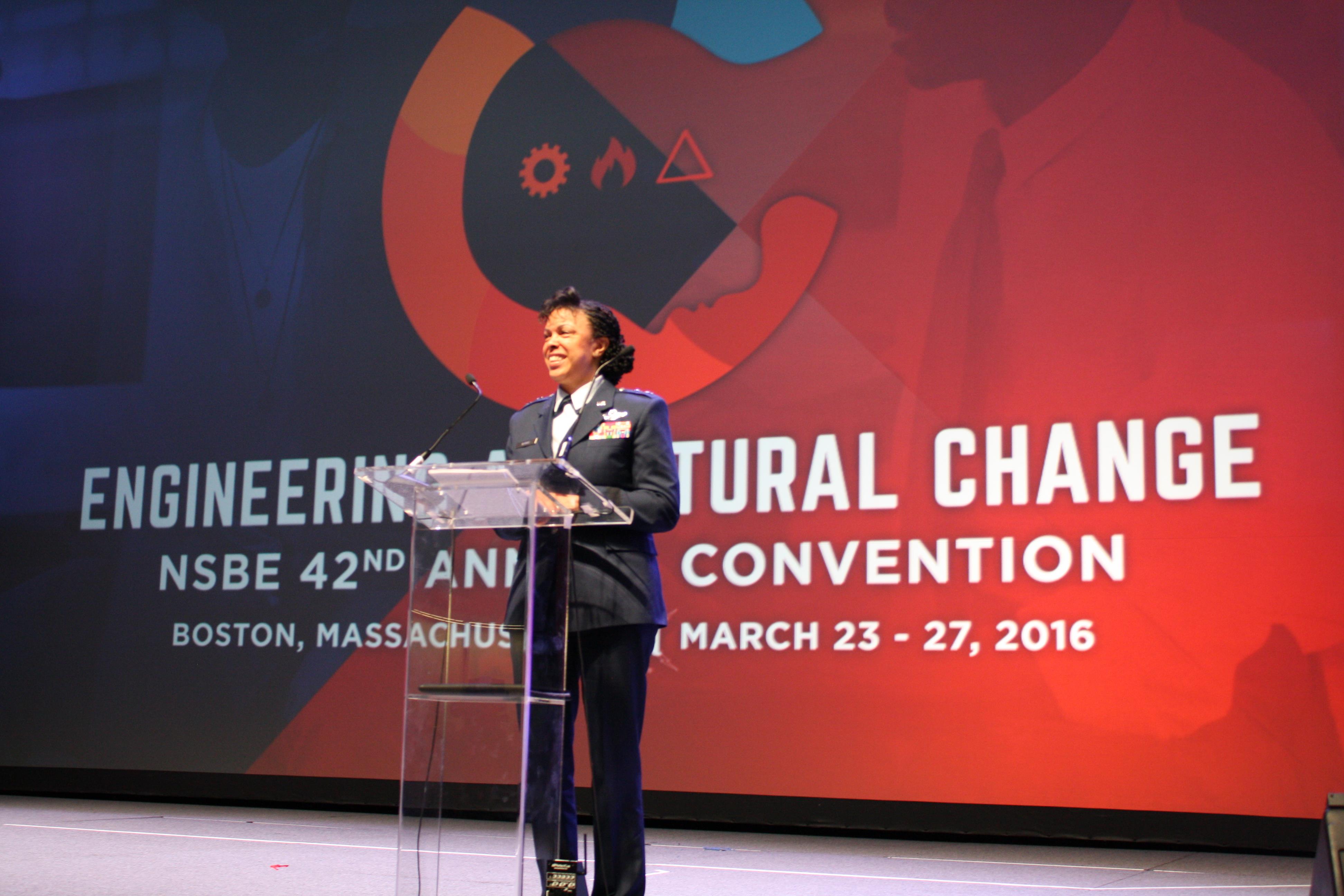 Maj. Gen. Stayce Harris, the 22nd Air Force commander, speaks to approximately 4,000 students and engineering professionals at the final general session of the 42nd annual convention of the National Society of Black Engineers on March 26, 2016, at the Boston Convention and Exhibition Center. The general culminated three days of Air Force participation in the convention, as the service worked to attract up and coming talent and engineering professionals to the many opportunities available in the Air Force. (Courtesy photo)

What do measuring earthquakes, creating lightning and applying space-like pressure to marshmallows all have in common? They each were demonstrations of science and technology used to intrigue the next generation of engineers on the Air Force’s capabilities and opportunities during the National Society of Black Engineers annual convention March 26 in Boston.

Harris joined Air Force director of diversity and inclusion, Chevalier P. Cleaves, and representatives from top defense contractors, technology leaders, car manufacturers, and pharmaceutical companies, in providing professional and leadership development, technical training, and networking and job opportunities to the more than 11,000 in attendance at the convention.

“If you’re looking for opportunities, look to the Air Force,” Harris said. “The challenges we face (in the Air Force) are great, but the rewards are even greater. There’s so much you can do coming from an engineering or technology background. By recruiting cutting-edge talent like yourselves and providing a range of options for you to serve, we seek to enable our Air Force to adapt ever more quickly to dynamic threats to our nation’s security.”

Cleaves used this platform to explain how the 21st century world requires leaders with broader and deeper skill sets.

“By ensuring we have the most talented, culturally competent, and operationally relevant force possible, we will be much more agile, and will be able to meet nascent requirements quickly and decisively,” Cleaves said. “By having a diverse Air Force presence at events such as the annual NSBE convention, we are helping to communicate the vast opportunities available to an audience that doesn’t necessarily know what we are all about, but have the talent we need to be competing for to ensure the Air Force stays at the cutting edge of STEM disciplines.”