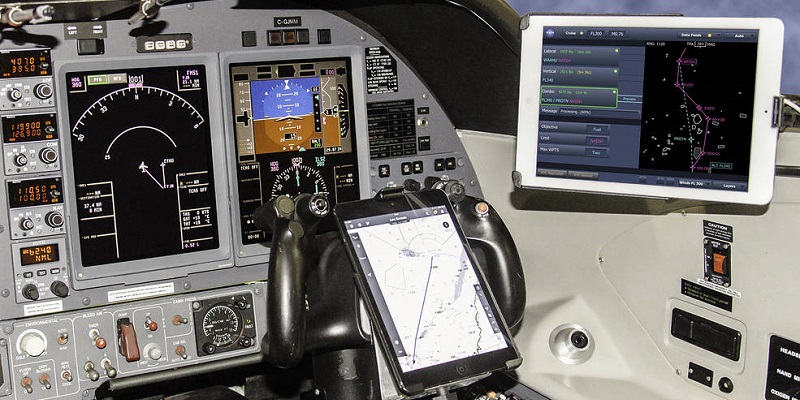 NASA has developed an app that could potentially help commercial airlines to reduce both the length of flights and the fuel consumed during those trips.

Over the course of the next three years, Virgin America and Alaska Airlines will test the app, known as the Traffic Aware Planner (TAP), to make traffic aware strategic aircrew requests (TASAR).

Read more: What Happend to Our Fascination with Space?

The TAP application is linked to the aircraft’s avionics information hub, according to David Wing, TASAR project lead at NASA’s Langley Research Center. Once attached, the application determines the airplane’s location , as well as its elevation, the route it’s traveling, and other flight information. Once all of that information is obtained, TAP determines what route or altitude change could expedite the flight or improve fuel efficiency. Those improvements are then displayed before the aircraft’s operators.

In addition to possibly saving time and money, TAP is able to help operator’s avoid potential crashes by connecting with the aircraft’s Automatic Dependent Surveillance-Broadcast (ADS-B) receiver. After the connection, TAP scans the ADS-B signals to determine if any airborne traffic or objects are nearby, making it easier to decide if a collision could potentially occur. Using that information, air traffic controllers can also decide if a pilot’s requested route change will work or potentially cause havoc.

If an aircraft can connect to the internet within its cockpit, TAP can use that connection to access weather and wind forecasts, and restricted airspace status. The information could help personnel develop a more efficient flight.  According to NASA, the weather-related software is loaded onto a tablet computer, which most airline pilots already use for flight calculations..

“The system is meant to help pilots make better route requests that air traffic controllers can more often approve,” said Wing. “This should help pilots and controllers work more effectively together and reduce workload on both sides from un-approvable requests. TASAR takes advantage of NASA’s state-of-the-art TAP software, flight information directly from the aircraft and the emerging ADS-B and Internet infrastructure to help pilots get approved to fly the most efficient or time-saving trajectory possible.”

TASAR has been successfully tested twice on an aircraft by Wing and other NASA personnel. The plane, a Piaggio P180 Avanti, was operated by Advanced Aerospace Solutions during a flight from Virginia to Kentucky.

“We used [TASAR] to make a route change request from air traffic control, which they granted,” said test pilot William Cotton. “We got a shortcut that saved four minutes off the flight time.”

According to NASA, researchers have concluded that by shortening flight times by four minutes, during each leg of a trip, could save massive amounts of fuel and time.

Prior to the flight tests, a dozen pilots provided their input on the TASAR technology during a simulated flight conducted at the University of Iowa Operator Performance Laboratory. Rockwell Collins also assessed the safety of TASAR.

“Up until now there has been no way to deliver comprehensive wind and congestion data to pilots in near-real time,” said Tom Kemp, Alaska Airlines’ vice president of operations. “TASAR is a ‘super app’ that will give our pilots better visibility to what’s happening now versus three hours earlier when the flight plan was prepared.”

Airlines should be able to seamlessly implement the TASAR application into planes, according to developers who said the technology doesn’t require pilots or air traffic controllers to alter their work habits.