National Instruments unveils the next generation of its LabVIEW program with features that include a toolkit for hooking into Amazon web services.

National Instruments Corp. kicked off its NIWeek event in Austin, Tex. with the debut of a significantly upgraded version of its Laboratory Virtual Instrument Engineering Workbench (LabVIEW), a system-design platform and development environment. Among the more interesting aspects of the new release, called LabVIEW NXG 1.0, is a closer relationship to the web. NXG, for example, lets users design virtual instruments that talk to web servers. And a tool kit for Amazon web services lets users interface with the Amazon Echo and its Alexa voice service. NI personnel demonstrated some of the possibilities of the connection during one of the event keynotes. 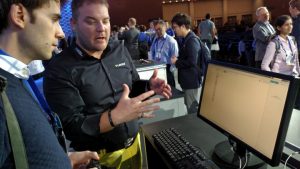 Another interesting aspect of NXG is that it is said to let users do a lot of design work without really knowing much about LabVIEW programming techniques. Explains Jeff Kodosky, NI cofounder and business and technology fellow, “For a long time we focused on making additional things possible with LabVIEW, rather than furthering the goal of helping engineers automate measurements quickly and easily. Now we are squarely addressing this with the introduction of LabVIEW NXG, which we designed from the ground up to embrace a streamlined workflow. Common applications can use a simple configuration-based approach, while more complex applications can use the full open-ended graphical programming capability of the LabVIEW language, G.” 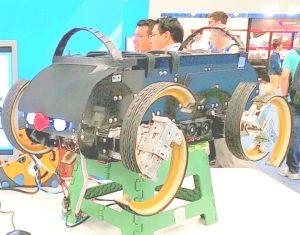 One notable student project called out at the NI Engineering Impact Awards was this wheel-transformable robot called the TurboQuad developed by students at the National Taiwan University. Using sliding mechanisms in each of its appendages, the TurboQuad makes smooth transitions between a wheeled mode and a legged mode to handle changing terrains. It uses LabVIEW and a Compact RIO for the controls. When the legs form a circle and rotate, the robot moves like an ordinary four-wheeled vehicle, and when the legs are extended, the robot moves like a quadruped. 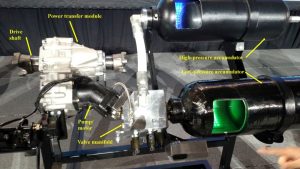 The winner of the NI Engineering Impact Award for transportation and heavy equipment was Lightning Hybrids for its hydraulic hybrid system that uses an NI System on Module (SOM) to hydraulically store otherwise wasted braking energy as hydraulic pressure that can be reused to accelerate the vehicle. Lightning Hybrids controls engineer Adam Hartzell described the system during a Wednesday keynote presentation.

The nonprogramming workflows build the necessary code behind the scenes. For instance, engineers can drag and drop a section of code equivalent to 50 lines of text-based code. LabVIEW NXG also contains a re-engineered editor that lets LabVIEW more easily integrate with a broader set of languages. The modernized editor improves programming productivity by streamlining the editor micro-interactions, user interface objects based on vector graphics and zooming capabilities.

The NXG release as well sports facilities for extending LabVIEW into domains outside those strictly dwelling on test and measurement. For example, programs written in the Python language – a common choice for big data-type applications — can hook into LabVIEW. This happens courtesy of an API in hardwired NXG drivers that can be called from Python programs.