It’s about speed, and Sandia National Laboratories, with a hypersonic wind tunnel and advanced laser diagnostic technology, is in an excellent position to help U.S. defense agencies understand the physics associated with aircraft flying five times the speed of sound.

With potential adversaries reporting successes in their own programs to develop aircraft that can be flown at Mach 5 or greater speeds, U.S. development of autonomous hypersonic systems is a top defense priority.

That has made aerospace engineer Steven Beresh of Sandia’s aerosciences department and his colleagues at the hypersonic wind tunnel popular as of late.

“Before, the attitude was that hypersonic flight was 30 years away and always will be,” said Beresh, the lead wind tunnel engineer. “Now with the national needs, it needs to be tomorrow. We’re becoming very busy.”

Cold in the tunnel

There’s a whoosh of air, then a rumble followed by an electrical hum. It lasts about 45 seconds as air blows down the tunnel to a vacuum at speeds of Mach 5, 8 or 14, depending on pressure settings. The Mach 5 nozzle uses high-pressure air (nitrogen plus oxygen). Nitrogen alone is used at the higher speeds and can be pressurized to 8,600 pounds per square inch. For comparison, recommended pressure for a car tire is usually between 30 and 35 psi. There is so much potential energy, nitrogen must be stored in a bunker behind 1-foot-thick walls.

A model—usually shaped like a cone, cylinder or tailpiece replica of what might be used with flight vehicles—is placed in the tunnel’s 18-inch diameter test section. By necessity, the model, 4 to 5 inches in diameter, is not an exact replica of the full-scale version but can handle a variety of instrumentation, geometry changes and spin testing. Part of the wind tunnel engineer’s job is to understand those scaling issues.

Inside the test section, temperatures can get extremely low, so electric resistance heaters unique to each Mach number heat the gases and prevent condensation of the gas. Without heat, the air or nitrogen turns to ice in the wind tunnel. The heaters essentially work like very large hair dryers—3-megawatt hair dryers—that can raise the air temperature above 2,000 degrees Fahrenheit at the beginning of the tunnel. By the time air or gases get to the test chamber, the temperature can fall as low as minus 400 degrees Fahrenheit.

When discussing Sandia’s contribution to hypersonic research, Beresh refers to solving the “hypersonics problem,” which is basically trying to grasp the physics of how air flows over an object at speeds greater than Mach 5.

“The physics are enormously difficult at hypersonic speed,” Beresh said. The air and gases react differently than at subsonic speed; materials are put under extreme temperatures and pressure; and there is the added challenge of guidance mechanisms also needing to withstand those pressures.

“We have some information, but not enough information,” he said. “We’ve mostly been dealing with re-entry vehicles. Before, the idea was to just have the vehicle survive; now, it needs to thrive. We’re trying to fly through it.”

“It’s the marriage of these measurements with the wind tunnel capabilities that gives Sandia its national niche,” Beresh said. “And you’ve got to have people who can do both working together.”

“Sandia has been at the forefront of developing new measurement techniques,” Richardson said. “We’re always pushing to improve measurement capabilities.”

Sandia is using advanced lasers to measure the speed of the gases passing over the model, direction of air flow, pressure and density of the gases and how heat is transferred to the model.

“Sometimes it’s about how close can you get to the surface of the object to see how gases are reacting at that speed,” Richardson said. “Not just in front of the model but behind it. The ultimate goal is to measure everything, everywhere, all the time.” 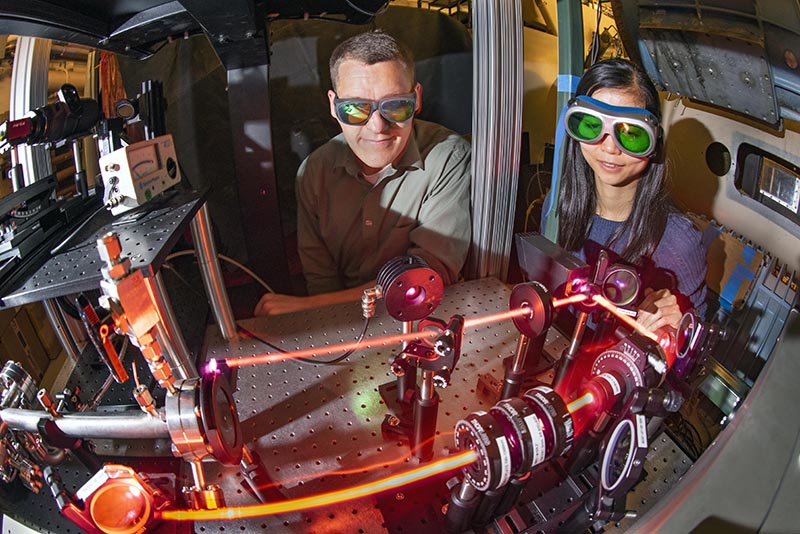 A laser aimed through the test section’s rectangular window allows the light coming in to measure the air flow inside. In recent years, new measurement capabilities have become possible with the commercialization of lasers that operate on femtosecond time scales. That’s equivalent to 10-15 seconds, or 1 millionth of 1 billionth of a second.

“These laser pulses are very short in time, but have really high intensity,” Richardson said. “At the femtosecond time scale, almost all motion is stopped, or frozen.” By coupling the femtosecond laser to a high-speed camera, measurements can be performed thousands of times a second.

Sandia’s hypersonic wind tunnel is relatively cheap to use in comparison with larger tunnels at NASA or the Air Force, but tests can go a long way to developing modeling and simulation capabilities. It blends the experimental with the computational to push the science forward, Beresh and Richardson said.

Sandia’s wind tunnels have a long history of contributing to the nation; the labs’ first was built in 1955. Even in today’s era of computational simulation for engineering practice, wind tunnels are key to aerospace technology.

“We are making more accurate measurements because we’re always trying to push that capability,” Richardson said. “The hypersonic wind tunnel and measurement science are important parts of research at Sandia. It’s a proving ground for future capability.”