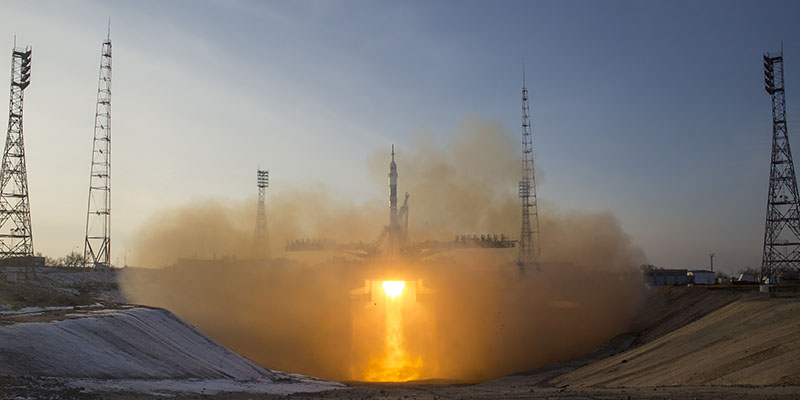 They will join other residents on the station to continue important research that advances NASA’s journey to Mars, while making discoveries that can benefit all of humanity.

The arrival of Kopra, Malenchenko and Peake returns the station’s crew complement to six. The three join Expedition 46 Commander Scott Kelly of NASA and Flight Engineers Sergey Volkov and Mikhail Kornienko of Roscosmos.

During more than five months on humanity’s only microgravity laboratory, the Expedition 46 crew members will conduct more than 250 science investigation in fields including biology, Earth science, human research, physical sciences and technology development.

Kopra, Malenchenko and Peake will remain aboard the station until early June 2016. Kelly and Kornienko will return to Earth at the conclusion of their one-year mission on March 1, 2016, along with Volkov.

The pair will have spent 340 consecutive days living and working in space to advance understanding of the medical, psychological and biomedical challenges astronauts face during long duration spaceflight, in addition to developing countermeasures to reverse those effects.

Ongoing station research also includes the Microbial Payload Tracking Series project, which uses microbial analysis techniques to establish a census of the microorganisms living on surfaces and in the atmosphere of the space station.

Along with crew members and experimental payloads, the space station is home to a variety of microbes, which are a cleaning nuisance and potentially threatening to crew health and station equipment.

Analyzing these microbes can help determine whether some are more virulent in space, and which genetic changes might be involved in this response. Results from the investigation can be used to evaluate cleaning strategies, and to mitigate microbe-related risks to crew health and spacecraft system performance.

The crew members are scheduled to receive several cargo spacecraft — including multiple U.S. commercial resupply vehicles from SpaceX and Orbital ATK — each delivering tons of food, fuel, supplies and research.

SpaceX will deliver on its eighth commercial resupply services mission an important technology project that could help drive future exploration.

Developed under a public-private partnership, the Bigelow Expandable Activity Module (BEAM) is an expandable habitat technology demonstration for the International Space Station.

Expandable habitats can greatly decrease the amount of transport volume for future space missions, weighing less and taking up less room on a rocket.

These habitats have the potential to provide a comfortable area for astronauts to live and work, as well as a varying degree of protection from solar and cosmic radiation, space debris and other elements of the space environment.

Highly reliable habitation systems will be essential to keep future crews healthy and productive in the deep-space environment during missions in lunar orbit where the systems will be validated for future missions to Mars that could last as long as 1,100 days.

For 15 years, humans have been living continuously aboard the station to advance scientific knowledge and demonstrate new technologies, making research breakthroughs not possible on Earth that also will enable long-duration human and robotic exploration into deep space.

A truly global endeavor, more than 200 people from 15 countries have visited the unique microgravity laboratory that has hosted more than 1,700 research investigations from researchers in more than 80 countries.