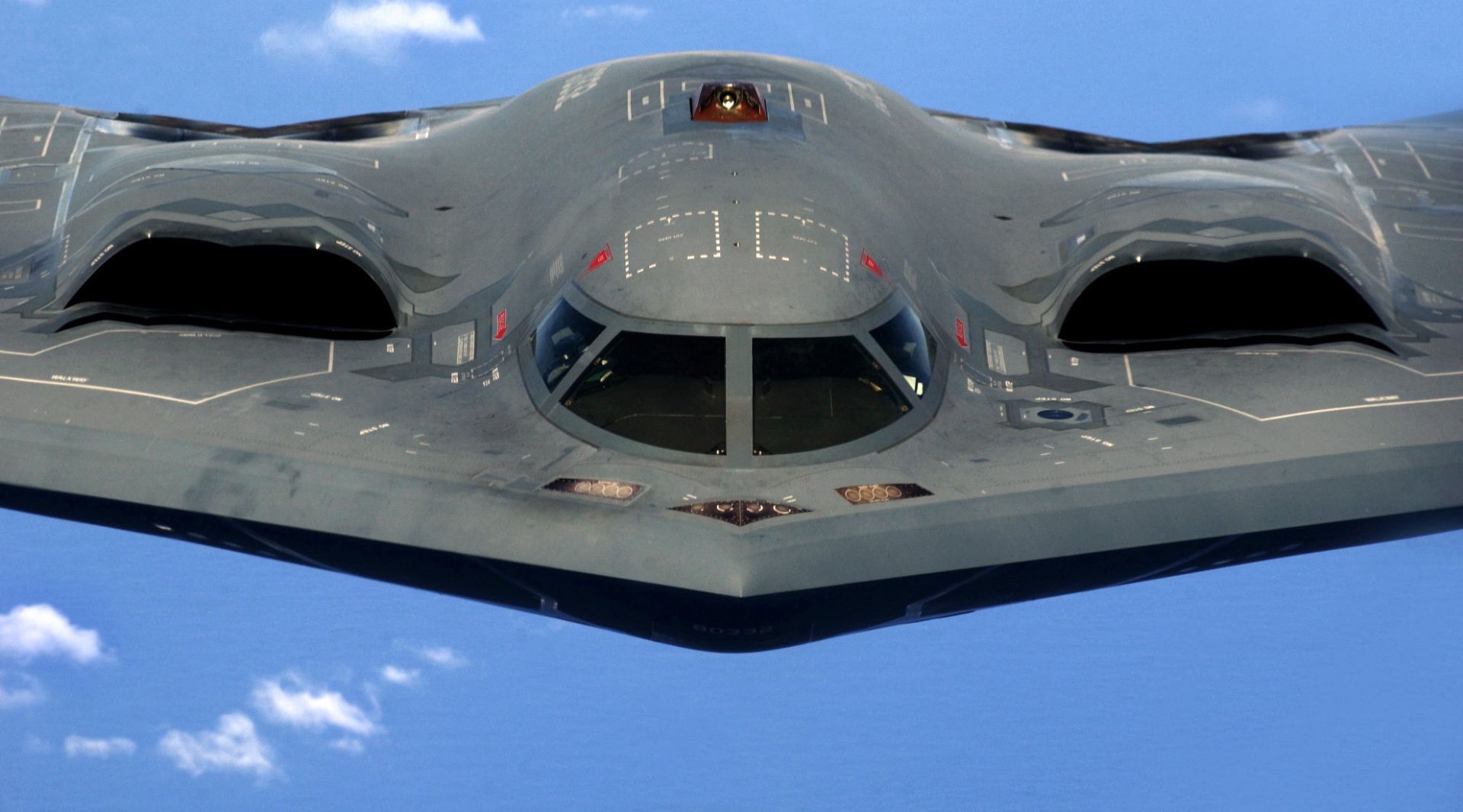 A U.S. Air Force B-2 Spirit “Stealth” bomber, 393rd Expeditionary Bomb Squadron, 509th Bomb Wing, Whiteman Air Force Base, Mo., flies over the Pacific Ocean after a recent aerial refueling mission, May 2, 2005. The Bombers are deployed to Anderson Air Force Base, Guam, as part of a rotation that has provided the U.S. Pacific Command a continous bomber presence in the Asian Pacific region since February 2004, enhancing regional security and the U.S. commitment to the Western Pacific. (U.S. Air Force photo by Tech Sgt. Cecilio Ricardo)

Almost every aspect of America’s newest bomber is top secret, but experts predict the warplane will be very “stealthy,” packed with sensors — and able to deliver nuclear payloads anywhere.

The Pentagon this week announced Northrop Grumman as the winner of the much-anticipated contest to build the Long Range Strike Bomber, or LRSB, in a decades-long program that will likely end up costing in excess of $100 billion.

The Air Force wants 100 of the warplanes, which will replace America’s increasingly antique B-52s — originally designed in the 1950s — and its B-1 bombers that first saw action in the 1980s.

Right now — and for years to come — the plane’s outward appearance, and inner workings, are intended to remain classified.

Based on the world’s changing security environment, especially new cyberthreats, experts envision an extremely high-tech plane that can penetrate enemy territory without registering on radar.

“It would carry on-board electronic attack equipment to supplement its stealth,” Loren Thompson, an expert at the Lexington Institute think tank, told AFP.

“It must be stealthy in all parts of the electromagnetic spectrum. It has to have electronic, on-board jamming equipment that would add to its stealth by preventing enemy sensors from working.”

Emphasis on stealth
This emphasis on stealth was likely a factor in Northrop Grumman’s successful bid. The firm, which beat out a team comprised of aerospace giants Boeing and Lockheed Martin, has crucial experience in the secretive technology.

The Virginia-based company built America’s fleet of B-2 stealth bombers, which are virtually invisible to radar and have an unmistakable, flying-wing design that looks like something Batman might fly.

Making an airplane stealthy is incredibly complex, with every exterior component tailored to hide tell-tale signs a radar could spot.

Countries such as Russia and China have invested heavily in missile systems and ultra-modern radar to try to counter the threat of any approaching enemy.

Experts say the new bomber is likely already well advanced in its development, but don’t expect to see it deployed before the mid-2020s. That means the Pentagon has no immediate plans to mothball its hulking B-52 bombers.

Each new plane is expected to cost $564 million. But the overall price tag for the program will be higher once development costs are included.

Future upgrades
The Air Force wants to avoid the embarrassing cost overruns that have beset other plane programs, such as the F-35 fighter jet; its price tag has ballooned to $400 billion.

One way to do this is to make the plane upgradable while avoiding needless design meddling.

“As the program progresses, new threats will be identified, new technologies will emerge, and the temptation to change the program’s requirements will be great,” Center for Strategic and International Studies experts Todd Harrison and Andrew Hunter wrote in a paper.

“The Air Force must resist these temptations if it wants to keep to its cost target,” they added, noting the Air Force should bump major changes to a future version or batch of the aircraft.

The bomber will be “dual-capable,” meaning it can carry both conventional and nuclear weapons.

“This open architecture will help ensure competition throughout the life cycle of the program, and make it easier to modify the platform as technology advances and the threats evolve,” he added.

Aviation analyst Richard Aboulafia said that in addition to stealth capabilities, the LRSB will also be able to mask its electronic signals, and will be packed with powerful jammers to stop enemies from targeting the plane.

It probably won’t fly at supersonic speeds, because doing so would burn up too much fuel and reduce its range, while also making it easier to spot.

The plane’s range is secret. But Air Force Secretary Deborah Lee James said the LRSB would give America “the capability to launch from the continental United States air strikes that would be able to strike any location in the world.”