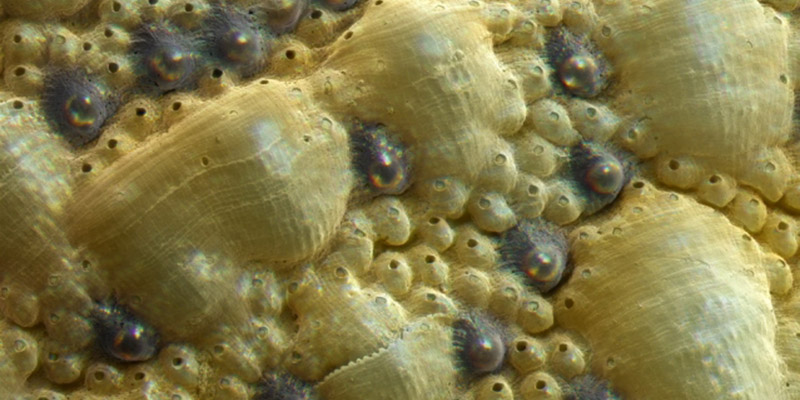 Close-up image of part of the shell of a chiton (Acanthopleura granulata) shows the two kinds of sensory organs that cover the shell surface. The eyes are the dark bumps with shiny centers. The exact function of other sensory organs called aesthetes (small bumps with black centers) is not yet known. Courtesy of the researchers

Usually, it’s a tradeoff: If you want maximum physical protection, whether from biting predators or exploding artillery shells, that generally compromises your ability to see.

But sea-dwelling creatures called chitons have figured out a way around that problem: Tiny eyes are embedded within their tough protective shells, with their transparent lenses made of the same ceramic material as the rest of their shells — and just as tough.

These armor-plated eyes could provide a model for protective armor for soldiers or workers in hazardous surroundings, say researchers at MIT, Harvard University, and elsewhere who analyzed the structure and properties of these uniquely hardy optical systems. 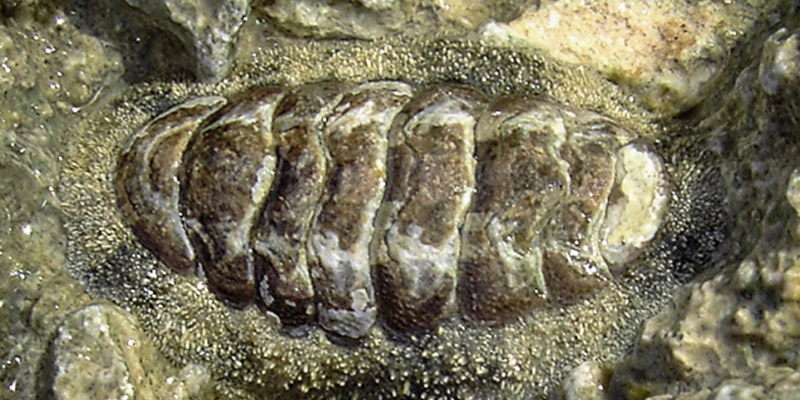 These chitons, a species called Acanthopleura granulate, have hundreds of tiny eyes dotting the surface of their tough shells. The researchers demonstrated that these are true eyes, capable of forming focused images. They also showed that unlike the eyes of almost all other living creatures, which are made primarily of protein, these eyes are made of the mineral aragonite, the same ceramic material as the rest of the creatures’ shells.

These mineral-based eyes, Li says, “allow the animal to monitor its environment with the protective armor shell. The majority of the shell is opaque, and only the eyes are transparent.”

Unlike most mollusks, chitons’ shells are made of eight overlapped plates, which allow them some flexibility. The little creatures — about the size of a potato chip, and resembling prehistoric trilobites — are found in many parts of the world, but are little noticed, as they resemble the rocks they adhere to.

Since these chitons live in the intertidal zone — meaning they are sometimes underwater and sometimes exposed to air — their eyes need to be able to work in both environments. Using experimental measurements and theoretical modeling, the team was able to show that the eyes are able to focus light and form images within the photoreceptive chamber underneath the lens in both air and water.

The team used specialized high-resolution X-ray tomography equipment at Argonne National Laboratory to probe the 3-D architecture of the tiny eyes, which are each less than a tenth of a millimeter across. Using other material characterization techniques, they were able to determine the size shape and crystal orientation of the crystalline grains that make up these lenses — critical to understanding their optical performance, Li says. 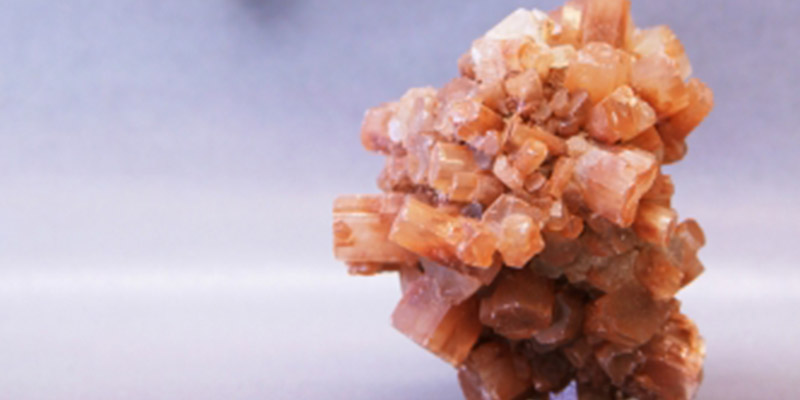 The hundreds of eyes on a chiton’s shell are made of the mineral aragonite, a large crystal of which is seen in this photo. Courtesy of the researchers

While others had long ago noted the chitons’ tiny eyes, it had not been demonstrated that they were capable of forming focused images, as opposed to being simple photoreceptive areas. “A lot of people thought the eyes were so small, there was no way this small lens would be capable of forming an image,” Connors says. But the team isolated some of these lenses and “we were able to produce images,” he says.

Ultimately, the research could lead to the design of bio-inspired materials to provide both physical protection and optical visibility at the same time. “Can we design some kind of structural material,” Li asks, “with additional capabilities for monitoring the environment?”

That remains to be seen, but the new understanding of how Acanthopleura granulata accomplishes that trick should provide some helpful clues, he says.

“High-resolution structure and property studies of the chiton system provide fascinating discoveries into materials-level tradeoffs imposed by the disparate functional requirements, in this case protection and vision, and are key to extracting design principles for multifunctional bio-inspired armor,” says Ortiz, the Morris Cohen Professor of Materials Science and Engineering and MIT’s dean for graduate education.

Peter Fratzl, a professor of biomaterials at the Max Planck Institute of Colloids and Interfaces in Potsdam, Germany, who was not involved in this research, says, “This is a truly impressive example of a multifunctional material.”

“In many instances, materials represent a compromise between conflicting properties, and materials development is often targeted at finding the best possible compromise,” Fratzl adds. “In this paper, the MIT-Harvard collaboration shows that chitons, a variety of mollusks that lives on rocks, has a visual system fully integrated in its armor. It is really astonishing to see how minerals can be used at the same time to focus light and to provide mechanical protection.”