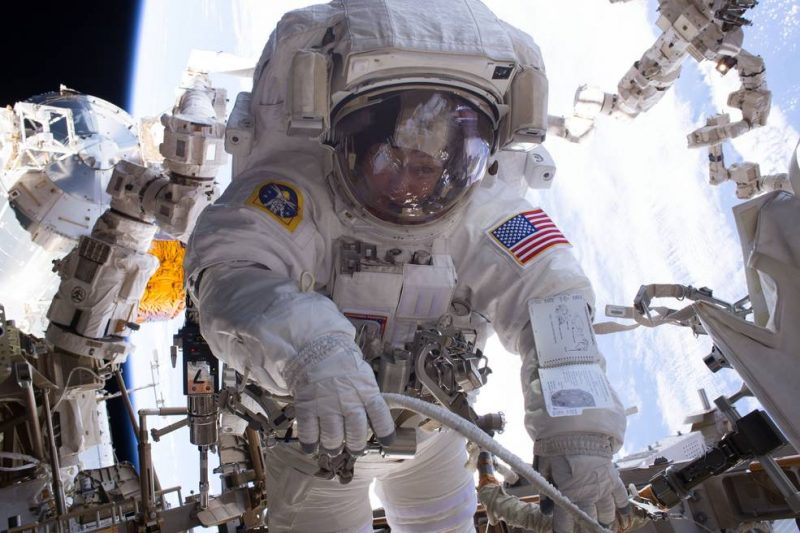 An equipment water leak shortened Friday’s spacewalk by two U.S. astronauts at the International Space Station, but they still managed to replace a faulty electronics box.

Despite the initial trouble, it was a milestone moment as Peggy Whitson and Jack Fischer floated outside on the station’s 200th spacewalk.

The astronauts wasted no time removing the old electronics box, their No. 1 chore, and plugging in a new unit. The device – a bit unwieldy at more than 5 feet long – supplies electricity and data to science experiments on the outside of the station. The pair also whipped through other tasks, leaving only two undone.

During earlier preparations, a small amount of water leaked from the connection point between an umbilical hose and Fischer’s suit. The hose is one of two that provide water, oxygen, power, cooling and communications for astronauts before they float outside.

The leaky hose had to be disconnected before the spacewalk could begin. The astronauts ended up sharing Whitson’s hose while they waited, which reduced their suit battery power. As a result, Mission Control cut the spacewalk from the intended 6 ½ hours to four hours even before it began.

The change-out went so well and fast 250 miles up that the spacewalkers had time to squeeze in a few other chores including the addition of a special data connector to the Alpha Magnetic Spectrometer.

Launched in 2011 on the next-to-last shuttle flight, the high-profile particle physics detector known as AMS is still working and has measured 100 billion particles. But it’s in need of repairs because of failing coolant pumps; Friday’s work on a bypass route for data should help future efforts.

In the end, Whitson and Fischer accomplished everything but the installation of a high-definition TV camera and wireless communication antennas.

As the spacewalk drew to a close, Whitson – the world’s most experienced female astronaut – said it was “amazing” to have taken part in the landmark spacewalk. Fischer agreed, saying he was humbled to follow in the legacy.

“Today threw us a lot of curve balls,” Mission Control said, but noted the astronauts “hit a grand slam.”

This spacewalk was supposed to take place in early April, but was put on hold because of delays in launching the replacement box and spectrometer equipment. The parts finally arrived late last month aboard Orbital ATK’s commercial cargo ship, the S.S. John Glenn, named after the first American to orbit Earth.

It was the first spacewalk for Fischer, who arrived at the station less than a month ago. Whitson has performed more spacewalks than any other woman. This was her ninth. She’s also spent more time in space than any other American, 552 days over three missions and counting. She doesn’t return to Earth until September.

Mission Control stressed throughout the day that Fischer’s suit was fine and that the leak was confined to the umbilical hose. Spare parts are on board to restore the system. NASA is especially wary of leaks involving spacesuits. In 2013, an Italian astronaut almost drowned during a spacewalk when water from the suit’s cooling system flooded his helmet.

Astronauts kicked off space station construction in orbit in 1998. The 200 mark includes assembly and maintenance by Russian spacewalkers as well as U.S.