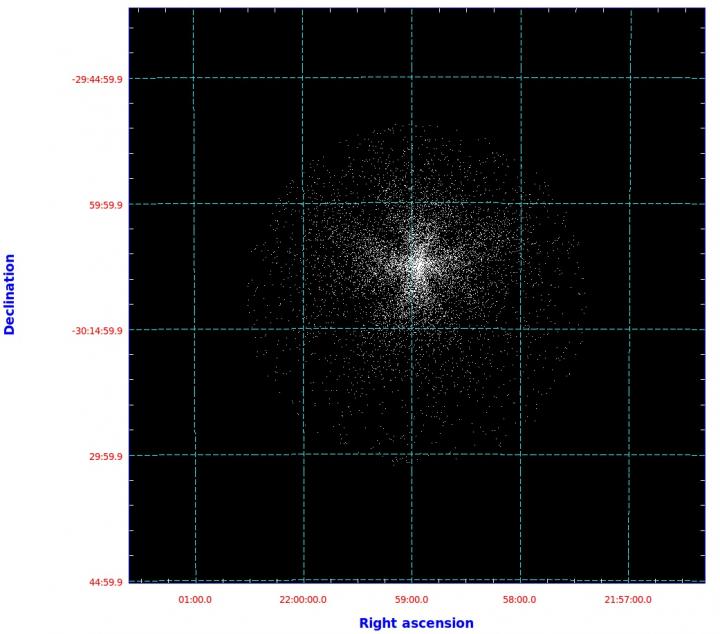 Astrosat was pointed at a target, PKS 2155-304, a special type of quasar, for its first light. The targeted object is an X-ray source, belonging to an enigmatic class of supermassive black holes in a galaxy 1.5 billion light years away. Credit: TIFR

The Soft X-ray focusing Telescope (SXT) onboard Astrosat, India’s first satellite dedicated to astronomical observations, saw its first light from an astronomical source on Oct. 26, 2015, after the camera door was opened at 06:30UT. The telescope door covering the optics had already been opened 10 days earlier.

The SXT is India’s first X-ray telescope based on doubly reflecting grazing incidence optics, containing 320 mirrors assembled together in 2 sets of 40 co-axial shells. The golden mirrors and the precision structure for assembling them were all built in the Department of Astronomy and Astrophysics of the Tata Institute of Fundamental Research (TIFR), Mumbai. All the mirrors assembled at different radii from the central axis were aligned perfectly to image a single point, and the entire telescope was then further aligned with an X-ray camera, in TIFR. The camera was previously assembled independently in the Department of Physics and Astronomy, at the University of Leicester, UK and delivered to TIFR. The electronics to control the CCD and its thermal control, and the commands to read data in different modes of operation were made at TIFR.

The Astrosat was pointed at a target, PKS 2155-304, a special type of quasar known as BL Lac type object, for its first light. The targeted object is an X-ray source, belonging to an enigmatic class of supermassive black holes in a galaxy very far away (1.5 billion light years away) which shoots out powerful jets of highly accelerated particles at speeds near the speed of light and pointing quite closely towards the Earth. The light from the jet overpowers the light from the galaxy and can be seen at almost all wavelengths from radio to very high-energy gamma-rays.

The data received at the ground station in Bengaluru and being analyzed at TIFR shows that the telescope and the camera are operating perfectly and data quality is excellent. “This is the moment we have been waiting for anxiously after the satellite was launched on 28 September. It is good to see all these mirrors working in perfect harmony to create an X-ray image on a camera containing a very small Charge Coupled Device (CCD) situated 2 metres away from the mirrors. The CCD is working at a controlled temperature of -82 degrees Centigrade, and we have been able to achieve the sensitivity, the spatial and spectral resolution as per our specifications”, says Prof. K P Singh, the project manager of the team that developed the SXT in TIFR.