AutomationDirect supports STEM education, including competitive robotics at the local, regional and national levels. For the second year in a row, in addition to sponsoring the annual Georgia Robotics Invitational Tournament and Showcase (GRITS) competition, AutomationDirect also provided the very unique trophies awarded to the winners. 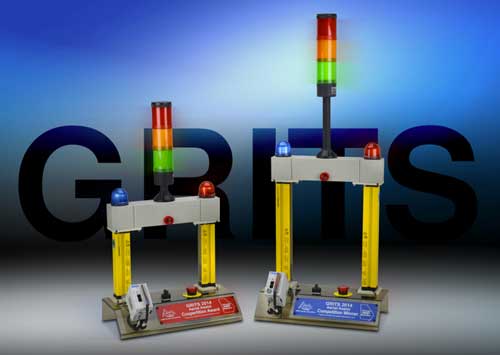 GRITS is a one-day event, produced by GeorgiaFIRST Robotics, the arm of US FIRST that promotes FIRST Robotics Competitions (FRC) in Georgia. This year’s game, “Aerial Assist”, took place at the World Congress Center in Atlanta, Georgia on Oct 4th, 2014.

The 2014 trophies use Contrinex™ light curtains to actuate a progression of blinking Cutler Hammer™ stack lights and Werma™ signal beacons. The sequencing is controlled by a CLICK PLC™ and the entire trophy is powered by a Rhino™ power supply. In fact, all the electrical components used to build the trophies are standard AutomationDirect products. The light curtains are mounted to the trophy using custom, 3D printed brackets designed by an AutomationDirect intern and former FIRST FRC Team member. Trophies were awarded to the competition winners (an alliance of four robotics teams), as well as team awards for Spirit, Outreach and Coopertition®.

Coopertition is a concept unique to FIRST Robotics. According to the FIRST Web site, “Coopertition is displaying unqualified kindness and respect in the face of fierce competition. Coopertition is founded on the concept and a philosophy that teams can and should help and cooperate with each other even as they compete.”

AutomationDirect hopes that by providing these unique trophies, the teams and students will be inspired not only to compete but also cooperate with and learn from each other, and to display the gracious professionalism that is expected at all FIRST competitions.

To see the trophies in action.