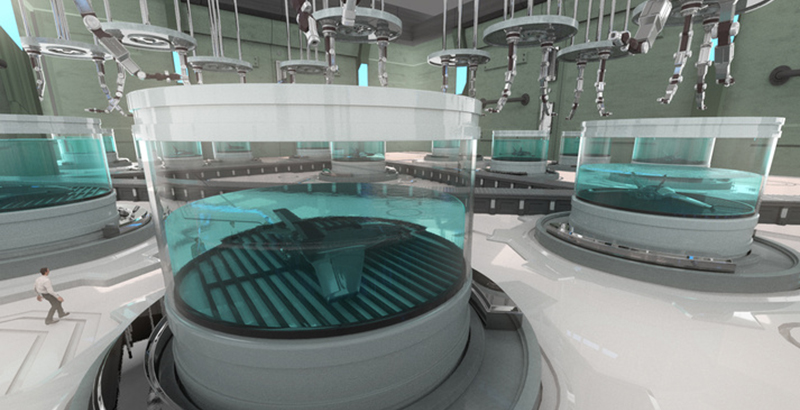 BAE Systems and the University of Glasgow are conducting cutting-edge research that combines drones, 3D printing, and nanotechnology. Their research is focused on looking at a faster, cheaper way to produce unmanned aerial vehicles (UAVs).

However, there’s a catch. Instead of constructing the UAVs, the institutions are looking for a way to grow them in computer-controlled chemical vats in a matter of weeks.

In theory, the system would allow drones and other specialized military equipment to be designed, constructed, and deployed much quicker, and in response to whatever circumstances the UAV needs to deal with.

“The world of military and civil aircraft is constantly evolving and it’s been exciting to work with scientists and engineers outside BAE Systems and to consider how some unique British technologies could tackle the military threats of the future” said Professor Nick Colosimo, a BAE Systems Global Engineering Fellow.

According to the researchers, a new machine called a “Chemputer” could enable advanced chemical processes to grow the UAVs and some of their complex electronic systems from a molecular level upwards. The following video shows a team of scientists inputting a drone’s desired traits into a computer system and thus initiating the growth of the aircraft in a vat.

The system speeds up “evolutionary processes and chemical reactions” to create the aircraft and its systems from environmentally sustainable materials. Once the drone is completed, it is removed from the vat and taken to a conveyor belt where a large robotic arm inserts additional components.

If the Chemputer ever comes to fruition, it could create drones for various military missions where a rapid response is required. These include deploying emergency supplies for military personnel inside enemy territory using a sophisticated release system and deploying small surveillance aircraft.

“This is a very exciting time in the development of chemistry,” said Professor Lee Cronin, University of Glasgow, and Founding Scientific Director, Cronin Group PLC.

“We have been developing routes to digitize synthetic and materials chemistry and at some point in the future hope to assemble complex objects in a machine from the bottom up, or with minimal human assistance. Creating small aircraft would be very challenging but I’m confident that creative thinking and convergent digital technologies will eventually lead to the digital programming of complex chemical and material systems.”

The futuristic vision of aircraft design and manufacturing will be presented at the upcoming Farnborough International Airshow, which runs from July 11 to 17.