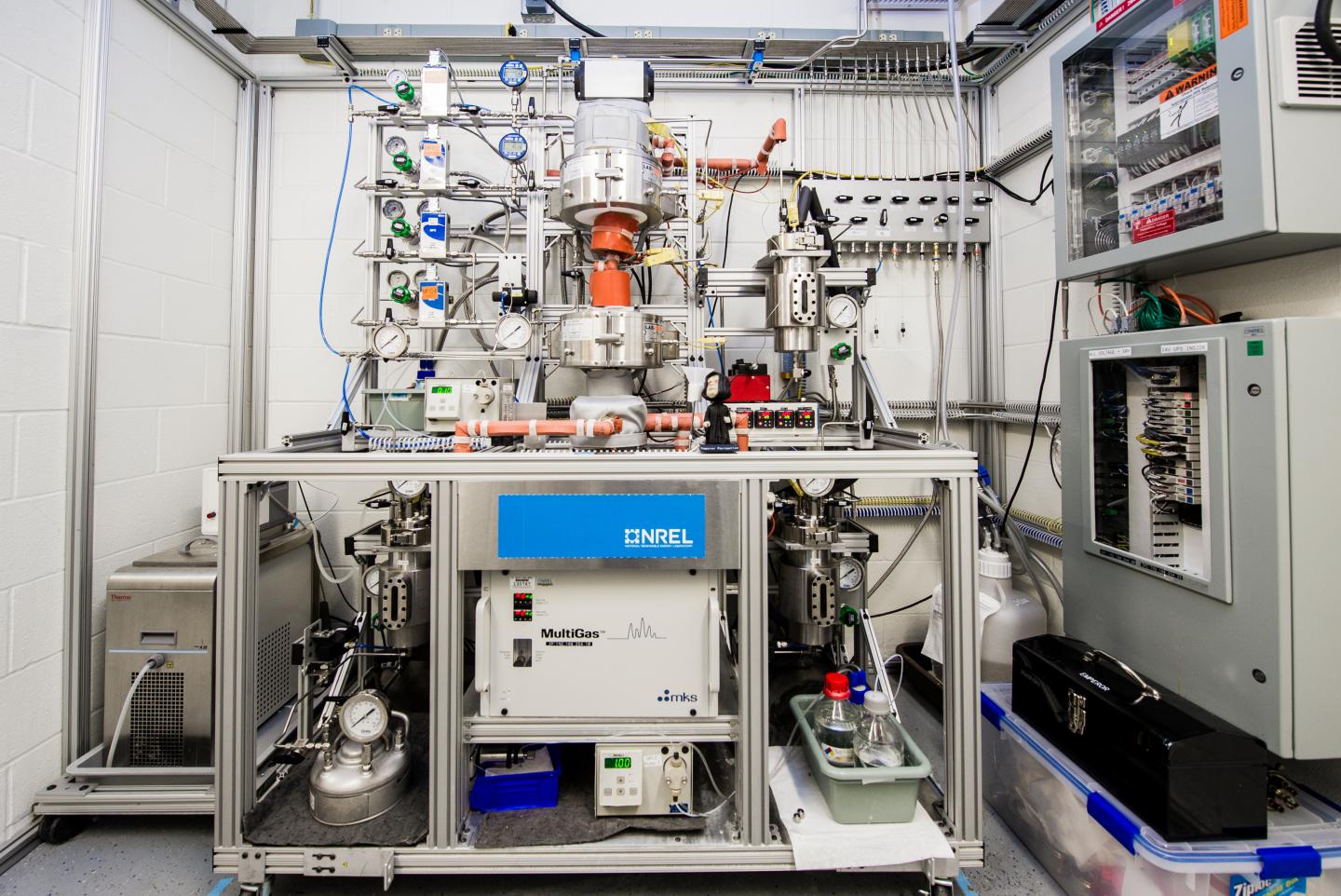 From cars and bicycles to airplanes and space shuttles, manufacturers around the world are trying to make these vehicles lighter, which helps lower fuel use and lessen the environmental footprint.

One way that cars, bicycles, airplanes and other modes of transportation have become lighter over the last several decades is by using carbon fiber composites. Carbon fiber is five-times stronger than steel, twice as stiff, and substantially lighter, making it the ideal manufacturing material for many parts. But with the industry relying on petroleum products to make carbon fiber today, could we instead use renewable sources?

In the December 2017 issue of Science, Gregg Beckham, a group leader at the National Renewable Energy Laboratory (NREL), and an interdisciplinary team reported the results of experimental and computational investigations on the conversion of lignocellulosic biomass into a bio-based chemical called acrylonitrile, the key precursor to manufacturing carbon fiber.

Acrlyonitrile is a large commodity chemical, and it’s made today through a complex petroleum-based process at the industrial scale. Propylene, which is derived from oil or natural gas, is mixed with ammonia, oxygen, and a complex catalyst. The reaction generates high amounts of heat and hydrogen cyanide, a toxic by-product. The catalyst used to make acrylonitrile today is also quite complex and expensive, and researchers still do not fully understand its mechanism.

“That’s where our study comes in,” Beckham said. “Acrylonitrile prices have witnessed large fluctuations in the past, which has in turn led to lower adoption rates for carbon fibers for making cars and planes lighter weight. If you can stabilize the acrylonitrile price by providing a new feedstock from which to make acrylonitrile, in this case renewably-sourced sugars from lignocellulosic biomass, we might be able to make carbon fiber cheaper and more widely adopted for everyday transportation applications.”

To develop new ideas to make acrylonitrile manufacturing from renewable feedstocks, the Department of Energy (DOE) solicited a proposal several years ago that asked: Is it possible to make acrylonitrile from plant waste material? These materials include corn stover, wheat straw, rice straw, wood chips, etc. They’re basically the inedible part of the plant that can be broken down into sugars, which can then be converted to a large array of bio-based products for everyday use, such as fuels like ethanol or other chemicals.

“If we could do this in an economically viable way, it could potentially decouple the acrylonitrile price from petroleum and offer a green carbon fiber alternative to using fossil fuels,” Beckham said.

Beckham and the team moved forward to develop a different process. The NREL process takes sugars derived from waste plant materials and converts those to an intermediate called 3-hydroxypropionic acid (3-HP). The team then used a simple catalyst and new chemistry, dubbed nitrilation, to convert 3-HP to acrylonitrile at high yields. The catalyst used for the nitrilation chemistry is about three times less expensive than the catalyst used in the petroleum-based process and it’s a simpler process. The chemistry is endothermic so it doesn’t produce excess heat, and unlike the petroleum-based process, it doesn’t produce the toxic byproduct hydrogen cyanide. Rather, the bio-based process only produces water and alcohol as its byproducts.

From a green chemistry perspective, the bio-based acrylonitrile production process has multiple advantages over the petroleum-based process that is being used today. “That’s the crux of the study,” Beckham said.

XSEDE’s Role in the Chemistry

Beckham is no stranger to XSEDE, the eXtreme Science and Engineering Discovery Environment that’s funded by the National Science Foundation. He’s been using XSEDE resources, including Stampede1, Bridges, Comet and now Stampede2, for about nine years as a principal investigator. Stampede1 and Stampede2 (currently #12 on the Top500 list) are deployed and maintained by the Texas Advanced Computing Center.

Most of the biological and chemistry research conducted for this project was experimental, but the mechanism of the nitrilation chemistry was only at first hypothesized by the team. A postdoctoral researcher in the team, Vassili Vorotnikov of NREL, was recruited to run periodic density functional theory calculations on Stampede1 as well as the machines at NREL to elucidate the mechanism of this new chemistry.

Over about two months and several millions of CPU-hours used on Stampede1, the researchers were able to shed light on the chemistry of this new catalytic process. “The experiments and computations lined up nicely,” Vorotnikov said.

Because they had an allocation on Stampede1, they were able to rapidly turn around a complete mechanistic picture of how this chemistry works. “This will help us and others to develop this chemistry further and design catalysts and processes more rationally,” Vorotnikov said. “XSEDE and the predictions of Stampede1 are pointing the way forward on how to improve nitrilation chemistry, how we can apply it to other molecules, and how we can make other renewable products for industry.”

“After the initial experimental discovery, we wanted to get this work out quickly,” Beckham continued. “Stampede1 afforded a great deal of bandwidth for doing these expensive, computationally intensive density functional theory calculations. It was fast and readily available and just a great machine to do these kind of calculations on, allowing us to turn around the mechanistic work in only a matter of months.”

There’s a large community of chemists, biologists and chemical engineers who are developing ways to make everyday chemicals and materials from plant waste materials instead of petroleum. Researchers have tried to do this before with acrylonitrile. But no one has been as successful in the context of developing high yielding processes with possible commercial potential for this particular product. With their new discovery, the team hopes this work makes the transition into industry sooner rather than later.

The immediate next step is scaling the process up to produce 50 kilograms of acrylonitrile. The researchers are working with several companies including a catalyst company to produce the necessary catalyst for pilot-scale operation; an agriculture company to help scale up the biology to produce 3-HP from sugars; a research institute to scale the separations and catalytic process; a carbon fiber company to produce carbon fibers from the bio-based acrylonitrile; and a car manufacturer to test the mechanical properties of the resulting composites.

“We’ll be doing more fundamental research as well,” Beckham said. “Beyond scaling acrylonitrile production, we are also excited about is using this powerful, robust chemistry to make other everyday materials that people can use from bio-based resources. There are lots of applications for nitriles out there — applications we’ve not yet discovered.”