In a rare show of bipartisanship for the mostly polarized 115th Congress, Republican and Democratic Senate leaders announced a two-year budget deal that would increase federal spending for defense as well as key domestic priorities, including many health programs.

Not in the deal, for which the path to the president’s desk remains unclear, is any bipartisan legislation aimed at shoring up the Affordable Care Act’s individual health insurance marketplaces. Senate Majority Leader Mitch McConnell (R-Ky.) promised Sen. Susan Collins (R-Maine) a vote on health legislation in exchange for her vote for the GOP tax bill in December. So far, that vote has not materialized.

The deal does appear to include almost every other health priority Democrats have been pushing the past several months, including two years of renewed funding for community health centers and a series of other health programs Congress failed to provide for before they technically expired last year.

“I believe we have reached a budget deal that neither side loves but both sides can be proud of,” said Senate Minority Leader Chuck Schumer (D-N.Y.) on the Senate floor. “That’s compromise. That’s governing.”

Senate leaders are still negotiating last details of the accord, including the size of a cut to the ACA’s Prevention and Public Health Fund, which would help offset the costs of this legislation. 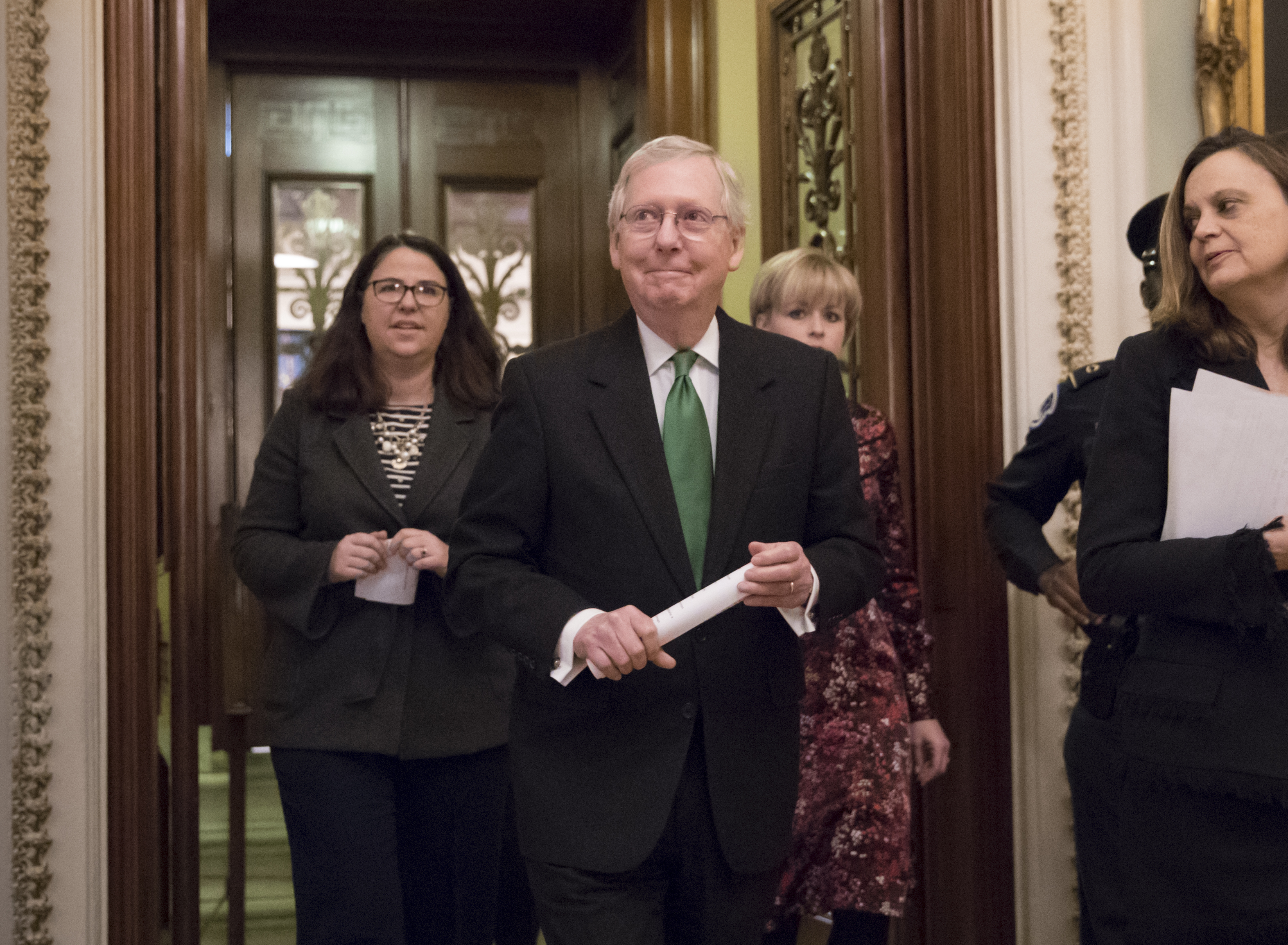 Senate Majority Leader Mitch McConnell, R-Ky., leaves the chamber after announcing an agreement in the Senate on a two-year, almost $400 billion budget deal that would provide Pentagon and domestic programs with huge spending increases, at the Capitol in Washington, Wednesday, Feb. 7, 2018. (AP Photo/J. Scott Applewhite)

According to documents circulating on Capitol Hill, the deal includes $6 billion in funding for treatment of mental health issues and opioid addiction, $2 billion in extra funding for the National Institutes of Health, and an additional four-year extension of the Children’s Health Insurance Program (CHIP), which builds on the six years approved by Congress last month.

In the Medicare program, the deal would accelerate the closing of the “doughnut hole” in Medicare drug coverage that requires seniors to pay thousands of dollars out-of-pocket before catastrophic coverage kicks in. It would also repeal the controversial Medicare Independent Payment Advisory Board (IPAB), which is charged with holding down Medicare spending for the federal government if it exceeds a certain level. Members have never been appointed to the board, however, and its use has not so far been triggered by Medicare spending. Both the closure of the doughnut hole and creation of the IPAB were part of the ACA.

The agreement would also fund a host of more limited health programs — some of which are known as “extenders” because they often ride along with other, larger health or spending bills.

Those programs include more than $7 billion in funding for the nation’s federally funded community health centers. The clinics serve 27 million low-income people and saw their funding lapse last fall — a delay advocates said had already complicated budgeting and staffing decisions for many clinics.

According to an analysis by the nonpartisan Congressional Budget Office, permanently repealing the caps would cost about $6.47 billion over the next decade.

Lawmakers would also forestall cuts mandated by the ACA to reduce the payments made to so-called Disproportionate Share Hospitals, which serve high rates of low-income patients. Those cuts have been delayed continuously since the law’s 2010 passage.

Limited programs are also affected. The deal would fund for five years the Maternal, Infant and Early Childhood Home Visiting Program, a program that helps guide low-income, at-risk mothers in parenting. It served about 160,000 families in fiscal year 2016.

“We are relieved that there is a deal for a 5-year reauthorization of MIECHV,” said Lori Freeman, CEO of advocacy group the Association of Maternal & Child Health Programs, in an emailed statement. “States, home visitors and families have been in limbo for the past several months, and this news will bring the stability they need to continue this successful program.”

And the budget deal funds programs that encourage doctors to practice in medically underserved areas, providing just under $500 million over the next two years for the National Health Service Corps and another $363 million over two years to the Teaching Health Center Graduate Medical Education program, which places medical residents in Community Health Centers.