Through the use of advanced CNC machine technology, Otto Bock manufacturers prosthetic and orthotic devices, making substantial improvements to its production. Working in cooperation with Bornemann, it produced a series of machines, two of which currently produce prostheses and seat cushions in the Otto Bock facility in Plymouth, Minn.. From here, the company markets these devices to prosthetists and orthotists throughout North America. 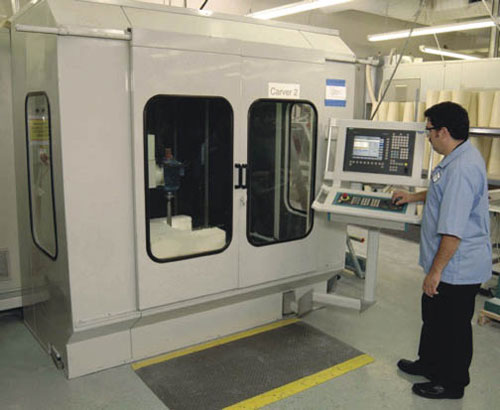 The biggest challenge for Otto was how to remain flexible in its manufacturing, given the constant flow of one-off work. Because of the nature of this field, the majority of devices produced at their facility are custom productions. In this case of the prosthetic and orthotic devices, Otto quickly realized the need to manufacture in Minnesota for constant evaluation of the available technologies for machining. Using ABT carvers, which mirrored its operation in England for the last ten years, Thermwood routers were used for its foam products. The collaboration with Bornemann led to the use of carvers, Thermwood routers and the development of carving technology using the latest CNC protocols. Because the product lines at Otto range from orthotic support seating to various prosthetic shapes, cosmetic covers and neck-to-pelvis body jackets, the products are often made from very large blanks of specially formulated and costly material. It was critical to have machines that run efficiently, but also have the flexibility for fast changeover and interpolation of large data files. 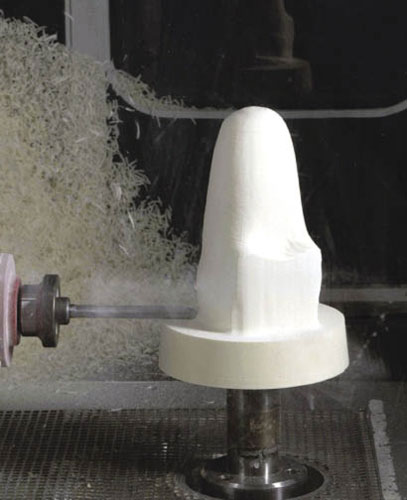 Three-axis milling of hard foam for creation of a positive model of the patient’s limb, to be used in the thermoforming process.

The previous carving method for the seating systems, contrasted the method that Bornemann’s robotic five-axis milling machines now used. Previously, a plaster cast would be made, then that mold would be used to reverse engineer the cutting path on the router. It was slow and imprecise. Now, the Otto Bock Seating System (OBSS) is used. With this system, the patient is seated in something similar to a beanbag chair, then the bag is evacuated, followed by the bag surface being digitized using Otto’s proprietary software. The software version of this CAD program is then translated through ProfiCAM into the Windows-based, CNC machining program. Through the use of this advanced, clean and non-invasive laser scanning technology, an extremely accurate image can be made of the patient’s torso from the seat bag surface. Initiating the design process, the software is then manipulated from CAD to Proficam and finally to the CNC on the machine, through OBSS. Otto upgraded the NCU/PCU with Siemens SINUMERIK CNCs to accept the most advanced version of this translation.

Using Bornemann carvers, Otto cut proprietary rigid and flexible polyurethane foams into the seat cushions used to support spinal injuries, as well as the various upper and lower limb prosthetic devices and supports produced at its Minnesota facility. The facility in England provides the software used to capture the patient’s particular characteristics, such as limb length, circumference and degrees of soft tissue containment. Once the prosthetist or orthotist collects the data, the product goes to the fabrication software support engineer. 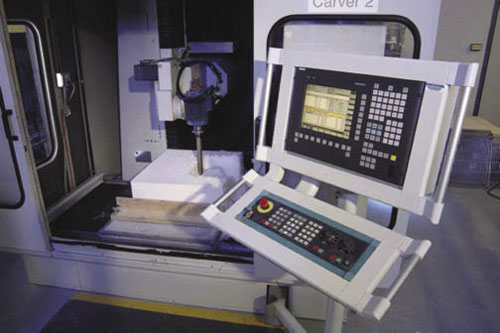 The SINUMERIK 840D, the CNC running the Bornemann machine, also equipped with a SIMODRIVE 611U drive package for precision motion control.

In a typical manufacturing operation for a seat cushion, a 26 in. x 26 in. x 14 in. block of material is secured in the vacuum bed on the Bornemann machine. A probe determines the zero offsets on the blank. For a prosthetic device, a rotary axis, two-ribbed, cone-shaped arbor is mounted on the machine. A predetermined coordinate fixture verifies the offsets and rotation angles. For foam cutting, a 12-in. long hollow tube of tool steel and 40-mm ball end rasp are used. The rigid polyurethane blanks uses the same design of cutting tool, only 7-in. in length with a ball endmill.

In the work envelope of the machine, one axis is used to move the seat cushion; two axes are used to move the tool. A 0º rotation achieves most material removal with a 30º undercut typical. On the prosthetics, three axes rotate the material in a vertical helical pattern. Once made, a prosthetic device is checked, using a specific diameter check ring, as well as digital calipers, to verify the contour surfaces as accurately as possible.

What took two to three hours using the old tool path generation method now takes perhaps 10 minutes. A wheelchair cushion that used to take 90 minutes to manufacture on the old system takes Otto less than 20 minutes to produce. In terms of overall productivity, these levels would not have been achieved without the Bornemann machines and Siemens CNC technology.