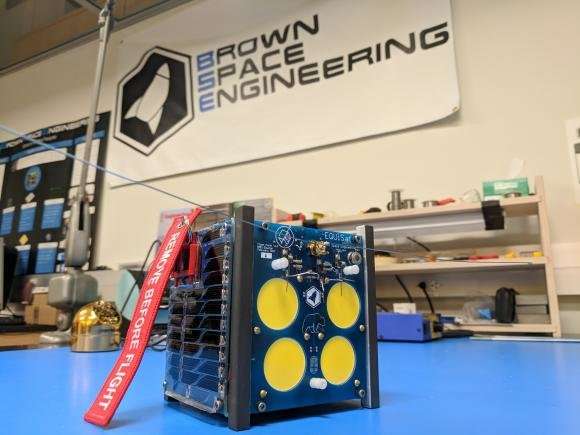 Friday, July 13, will mark a major milestone for current and former members of Brown Space Engineering, a student group that has spent the past seven years designing and building a small satellite.

That satellite, dubbed EQUiSat, is set to be deployed from the International Space Station at 10:20 a.m. Eastern time Friday morning. Soon after deployment, the satellite will begin transmitting telemetry data to ground stations on Earth from its orbit roughly 250 miles up. The satellite will be trackable on the Brown Space Engineering website, and the team will host a livestream of the deployment on their YouTube page starting at 10 a.m. Friday.

The deployment is the culmination of work that started with just a handful of undergraduates in 2011. Since then, a rotating group of students, which has now grown to around 90 in total, has kept the project on track: submitting proposals to NASA for launch, designing the spacecraft and making sure all of its systems work properly. The satellite was launched to the ISS in May, aboard an Antares rocket that lifted off from Wallops Island, Virginia.

Once EQUiSat exits the deployment pod, a small electrical pulse will burn through a thin wire that holds down that satellite’s antennae. With the antennae deployed, EQUiSat will start transmitting data on its position and the status of its systems about 30 minutes post-deployment.

“We’re certain we won’t get any data until at least midnight on Friday because that’s when it first passes over [a ground station in] Rome,” said McKenna Cisler, a Brown student and the team’s technical lead. But it’s also possible, Cisler says, that they won’t pick up any transmissions until July 18, when the satellite starts making more direct passes over the ground stations in Rome and in Providence.

EQUiSat’s primary mission is educational: to engage the public in space technology and remind people that access to space isn’t just limited to governments and corporations. Brown students plan to work with K-12 educators to build lesson plans that involve helping students track the satellite and understand how it works. The satellite is equipped with four LED beacons that will make brief nighttime flash patterns that can be seen from Earth with the naked eye.

The LED flashes won’t begin until EQUiSat’s batteries are fully charged by the solar panels arranged on the spacecraft’s outer shell. That’s expected to take a few days. The Brown Space Engineering website will have information about when flashes will be visible over Rhode Island.

The satellite is expected to remain in orbit for one to two years before eventually burning up in the atmosphere.