Imagine a world in which half of our electricity is generated renewably by offshore wind farms. Now imagine a powerful hurricane hitting the coast where that farm is located. If developers, engineers and policy makers haven’t prepared for this event the coast could face major consequences such as blackouts and brownouts. This is a scenario that Sanjay R. Arwade, professor of civil and environmental engineering at UMass Amherst, is working to guard against as offshore wind becomes more prominent in the U.S. market.

“Offshore wind is a huge opportunity for the US, particularly on the east coast…but along the east coast of the United States, there are hurricane risks, an issue we know how to model and mitigate. It’s just going to take the research work to make sure we do development right,” Arwade says.

UMass Amherst has the necessary tools and experts to take on the research problems posed by offshore wind. The campus is home to the Wind Energy Center (WEC), where much of these risk assessments are studied, and UMass researchers contributed extensively to a recently-published offshore wind assessment and recommendation report by the Massachusetts Research Partnership in Offshore Wind. The report suggests Massachusetts could be a leader in US offshore wind development. Arwade, a member of WEC and a co-author of the report, has led a team of graduate students and postdoctoral researchers to determine the risks posed by hurricanes through simulations and experiments. 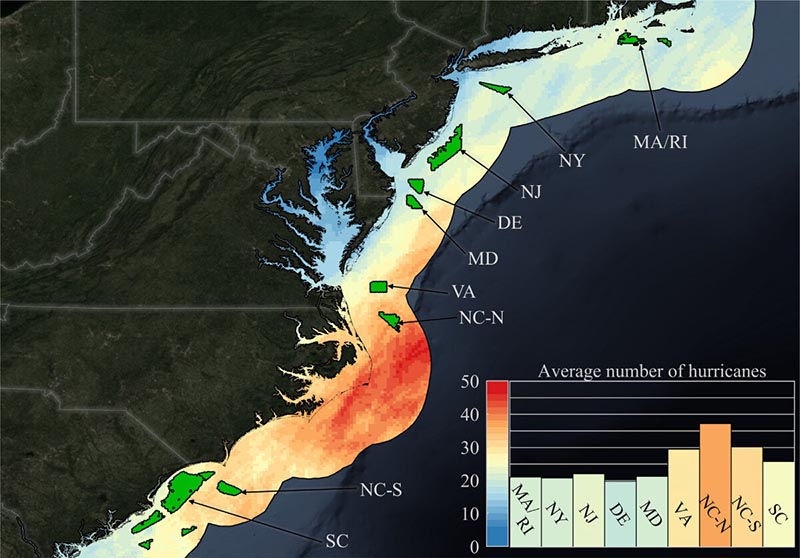 “A lot of what we’re doing is putting together components of research that are well understood on their own but haven’t been linked in meaningful ways,” Arwade said, “People know how to do the analysis of offshore structures, from the oil and gas industry in the U.S. to the offshore wind industry in Europe. People to a large extent know how to model hurricanes, but what hasn’t been done is to put those two things together.”

Through collaborations with other universities, Arwade says his team and collaborators have discovered that hurricanes have features in their wind fields that could be important to the design of offshore wind turbines. They have also looked at how big breaking waves interact with the structures. Other research that Arwade’s team is working on includes looking at fixed and floating bottom turbines and the opportunities that arise from them, creating maps of where breaking waves occur and using scenarios to look at the probabilities of hurricanes in relation to climate change in the future.

In turn, WEC’s research on hurricane risk assessment will benefit the offshore wind industry by providing developers with information they need to design and implement offshore farms with energy security and reliability in mind.

“By providing better models for hurricane risk I think we can help to insure energy security, essentially to help regulators make sure that 20 years from now when we achieve a stronger renewable energy presence, that when you flip the switch, the lights go on” Arwade says.

Another major security impact of offshore design is changing the standards to ensure safe and effective offshore wind structures.

“The biggest thing that will happen is revision to design codes,” Arwade said about the research his team is doing, “So when a group of engineers goes to design a structure, what they do is they reference design codes or design specifications and those design codes effectively instruct the engineer on how strong to make a structure at a given location. It tells the engineer what the loads are and things like that. There’s already been some progress in this direction towards developing hurricane-based design standards, but I think that’s where the impact is going to be felt.”

Offshore wind is becoming a global industry that needs to undergo further research to advance in the United States. The aforementioned report estimated that “electricity as a fraction of the world’s energy consumption will rise from 18 percent now to 40 percent in 2050”, and that “86 percent of that electricity will be generated from renewable resources, nearly all of which will come from wind energy (on land and offshore), solar photovoltaics, and hydropower.”

The work that Arwade and other experts at UMass Amherst are doing is important for the future of offshore wind in Massachusetts. The campus is prepared to take the lead in research, with many recommendations included in the report.

“We can’t afford to have this industry be harmed by unexpected failures,” says Arwade.