The fanciful spiral slide which connects the lobby and second floor of Otterbox’s corporate headquarters is the first clue to a visitor that at the highly-successful manufacturer of cases for cell phones and tablets does things differently. The Ft. Collins, CO based company’s “business as unusual” philosophy is also evident in its obsession with product quality, its employee-friendly environment, and its ability to bring a product from 1st concept to full production in eight weeks or less.

Otterbox’s unique corporate culture certainly helps give the well-established company the agility of a startup but it also relies on modern technologies, such as 3D printing, to stay one step ahead of its competition. It’s no wonder then that Stratasy LTD picked Otterbox as a Beta customer to help shake down its J750, a 6-color, 3D polymer jet printer, before it was formally introduced to the market. 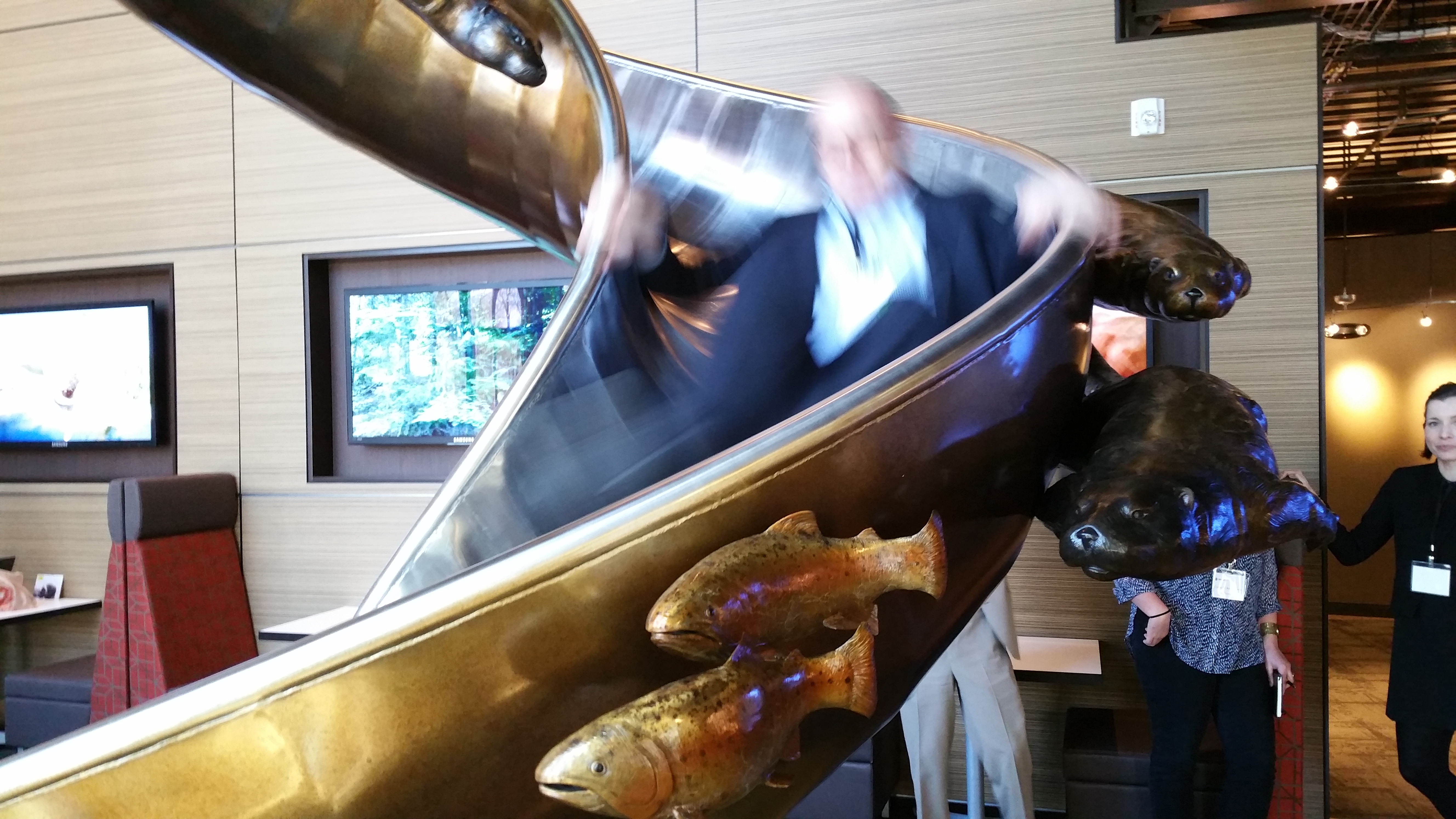 Even suited executives aren’t immune to the lure of the sculpture-laden 2-story slide which adorns Otterbox’s headquarters.

3D printers have been a part of Otterbox’s product development process since 2008, when they purchased a powder printer from ZCorp. The prints from that first ZCorp machine were rigid, often required assembly from multiple pieces and only came in white but they proved invaluable for visualizing early designs. When finished and painted, the prints were also used in the final product approval cycle and as pre-production sales tools.

As 3D printing technology matured, it worked its way into more phases of the product development cycle. Otterbox’s stable of 3Dprinters grew and eventually began to focus on Stratasys’s PolyJet technology which lays down thin layers of photopolymer film while curing them with an intense UV light source.  The process was a good fit for prototyping phone cases because of its fine resolution and the growing range of materials it could print, including rubber-like elastomers, clear and translucent compounds, and others which closely mimic the properties of ABS. All of the polymers are compatible with each other, enabling multi-reservoir printers to mix custom colors and print objects with soft and hard features built into them. This eliminates the need for painting and, in most cases, for assembly of a prototype from multiple parts.

Things got even more interesting when Stratasys offered Otterbox an opportunity Beta-test their J750, the latest addition to their ObJet Connex multi-color, multi-material series of 3D printers. It offers a six-material capacity (plus a 7th supply for support material), a 2X boost in print speed, and a 19.3in x 15.3in x7.9in build envelope. The JD750 can deliver resolution as fine as 14 microns, enabling it to print fine details, ultra-smooth finishes and nearly any type of textured surface effect. When loaded with its full color gamut (CMYK), the JD750 can accurately produce more than 360,000 different color shades. Using white and transparent materials in the remaining two channels enables it to create elements within an object which are perfectly clear or with any degree of translucency desired.

Like all models in the ObJet series, the J570 employs Adobe’s color printing engine for realistic repeatable colors. A new software suite allows designers to import CAD files from multiple platforms and translate them into multiple materials. Color attributes attached to the files are directly translated into object surfaces. These capabilities allow designers to produce prototypes with near-identical fit, feel and finish of production goods. Customers can now see exactly what they’ll be buying and provide feedback before committing to manufacturing.

The J750 went to work the day it arrived at Otterbox and the design team quickly learned how to take advantage of its new capabilities. Over the past few months, it has accelerated both the development and approval cycle. For example, design teams are now able to define a new case’s functionality, look, and feel within 24 hours, a process which Involves printing 5-12 different versions of a prototype.

Once definition is complete, engineers define specific parts and materials which will be used in working prototypes. Since the ObJet series can print with materials whose properties closely match production materials, these engineering prototypes can be used to test the look, fit, and feel of a final product – including the squishiness of a grip and the “snap” of parts clicking together. These capabilities allow designers and engineers to physically experience true product prototypes within hours of developing an initial concept, enabling immediate design and functional validation with internal stakeholders and end users.

Achieving 8-week “prototype to peg” development cycle requires parallel efforts throughout the Otterbox organization so the engineering prototypes are liberally shared with other functional groups. For example, some of the first prototypes are usually given to the packaging team so they can start developing new package in parallel. The J750’s ability to support a wide range of Digital Materials also allows the design team to accelerate time to market further by producing production tools, manufacturing molds, teaching aids, and other models.

Besides greatly accelerating Otterbox’s product delivery cycle, this new generation of polymer-based 3D printers helps unleash the design team’s creativity by enabling design decisions to be made quickly and with full confidence. “We’ve used 3D printers for years but nothing has come close to revolutionizing our design and ideation process the way the Stratasys J750 has,” said Brycen Smith, engineering technician supervisor for OtterBox. “Stratasys allows us to innovate in ways we never thought possible and gives us the ability to create true product-matching prototypes and to cut down the time necessary to bring products to market.”

To learn more about the Stratasys J750, visit http://www.stratasys.com/j750.