California’s government would set prices for hospital stays, doctor visits and other healthcare services under legislation introduced Monday, vastly remaking the industry in a bid to lower healthcare costs.

The proposal, which drew swift opposition from the healthcare industry, comes amid a fierce debate in California as activists on the left push aggressively for a system that would provide government-funded insurance for everyone in the state.

Across the country, rising healthcare costs have put the industry, lawmakers, and employers and consumers at odds.

The proposal in California would affect private health plans, including those offered by employers and purchased by individuals. A nine-member commission appointed by the governor and legislative leaders would set prices for everything from a physical exam to an allergy test to heart bypass surgery. No other state has such a requirement.

“If we do not act now, I’m concerned that health care prices will become unsustainable,” Assemblyman Ash Kalra, a freshman Democrat from San Jose who wrote the legislation, said in a news conference in Sacramento.

The measure faces an uphill battle in the Legislature, where lawmakers are generally cautious about making drastic changes to the healthcare system and are already juggling a wide range of ambitious proposals.

The proposal is backed by influential unions including the Service Employees International Union, Unite Here and the Teamsters. The unions are frustrated that healthcare costs are gobbling an increasing share of employee compensation.

“Every dollar that we spend on rising healthcare prices is a dollar that comes out of a worker’s pocket,” said Sara Flocks, policy coordinator for the California Labor Federation, a union coalition. “This is something that is eating up our wages and it is increasing income inequality. This is a fundamental question of fairness.” 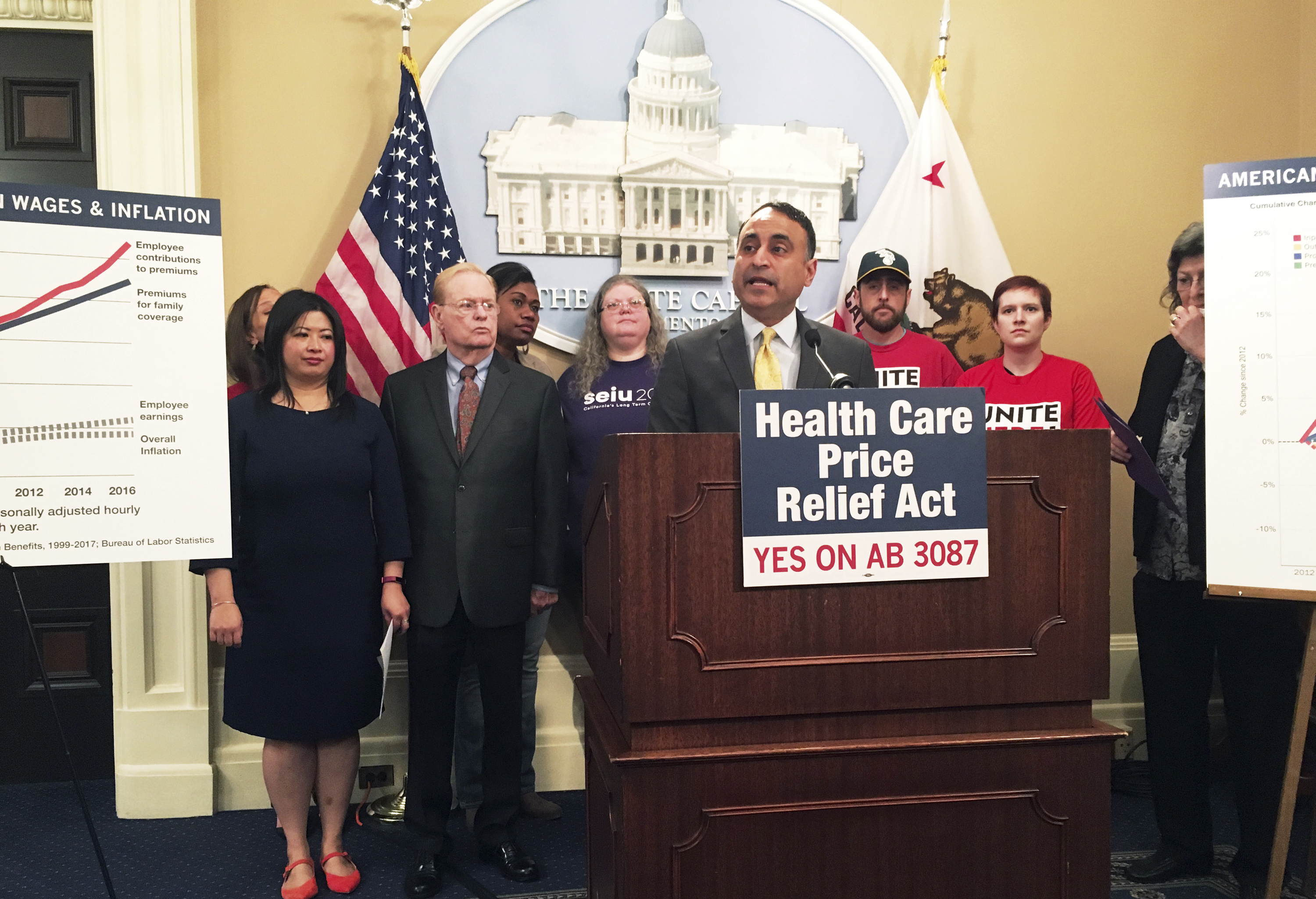 California Assemblyman Ash Kalra, D-San Jose, discusses his proposal to create government-imposed price controls for hospital stays, doctor visits and other health care services during a news conference on Monday, April 9, 2018 at the state Capitol in Sacramento, Calif. The proposal, which drew swift opposition from the health care industry, comes amid a fierce debate about health care prices in California and around the country. (AP Photo/Jonathan J. Cooper)

Healthcare providers say price controls would encourage doctors to move out of state or retire, making it harder for people to see a physician when they’re sick, and force hospitals to lay off staff or, in some cases, close their doors.

The California Medical Association, which represents physicians, called the proposal “radical” and warned that it would reduce choices for consumers.

“No state in America has ever attempted such an unproven policy of inflexible, government-managed price caps across every healthcare service,” Dr. Theodore Mazer, the CMA president, said in a statement.

Under Kalra’s bill, prices would be tied to Medicare’s rate for a particular service or procedure, with that price as a floor. There would be a process for doctors or hospitals to argue that their unique circumstances warrant payments higher than the state’s standard rate.

Paying hospitals 125 percent of Medicare’s rate would cut $18 billion in revenue and force them to trim nurses and other support staff, said Dietmar Grellman, senior vice president of the California Hospital Association. Private insurers make up for the low payments from government-funded health care, which doesn’t cover the full cost of care, he said.

“That’s why their bill is such an empty promise,” Grellman said. “They take money out of the system with rate regulation, but then they don’t address the huge gaping hole that’s created by Medicare and Medicaid.”

In recent decades healthcare spending has risen faster than inflation and wages while employers and health plans have shifted more of the costs onto consumers through higher premiums, deductibles and copays. Americans spend more per capita on health care than other developed countries.

Meanwhile, a wave of consolidation by hospitals, physician groups and insurance companies has given industry players more power to demand higher rates.