The West Australian government has caved into public demand, and will implement a trial of “SMART” drumlines, hoping to mitigate the frequency of shark attacks along its coastline. The news comes in the wake of two non-fatal attacks that occurred in the waters around the small town of Graceland in Southwestern Australia, which lies south of Perth. The trial will span 12 months, after which the results will be evaluated by West Australia’s Chief Scientist Peter Klinken. The two shark attacks near Graceland prompted the Margaret River Pro surfing competition to be cancelled, with doubts looming over the event’s future. 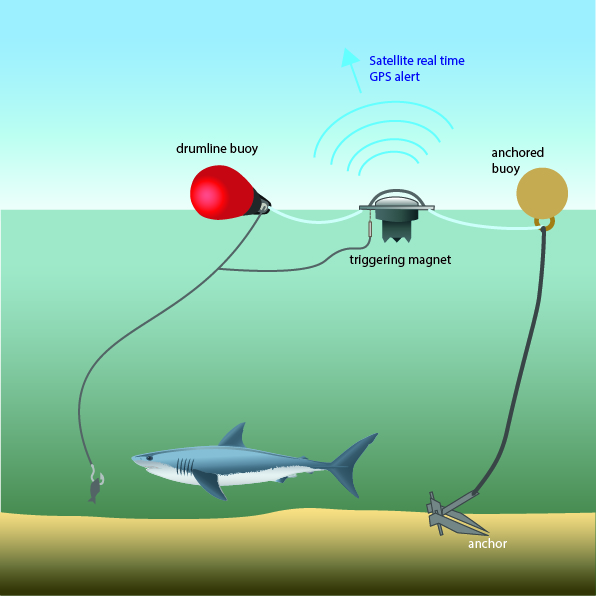 The SMART (Shark Management Alert in Real Time) drumline rigs are comprised of an anchor, rope, and baited hook; two buoys, and a satellite-linked communications unit, which is attached to a trace and baited hook. The drumlines will be set up approximately 500 meters offshore, far enough so any approaching sharks could be intercepted beyond the surf zone.

Once a shark gets hooked, pressure on the line triggers the communications unit, which alerts DPI scientists or contractors to the shark’s presence via telephone, email, or text. The team then responds immediately to the alert by releasing the tagged sharks about 1 km offshore, while any non-shark species get released immediately.

Since the sharks caught on SMART drumlines can be tagged and released, researchers will consider them an important research tool to help them better understand the movements and distribution of these predators. Sharks typically swim at least 1-2 km away from the shores after being caught, but when one gets too close in the future, DPI will provide alerts to the community using a network of 21 VR4G listening stations.

The West Australian government insists the SMART drumlines are different than a previous setup used in 2014, after a slew of attacks prompted public demand to take similar action. While the non-lethal SMART drumlines are intended to simply catch, tag, and release sharks, the rigs used 4 years ago featured a catch-and-kill design. During the 13-week trial—which cost the government $1.3 million—68 sharks were captured and killed, sparking massive protests at locations like Cottesloe Beach.

It’s unclear what the program’s exact costs will be, but government officials projected figures in the “several millions.” When the trial begins, researchers are expected to deploy 10 SMART drumlines off the coast near Gracetown, whose exact locations—which will be decided with input from local residents—have yet to be determined.