China’s unmanned Chang’e-4 lunar probe is currently roaming about the far side of the moon after making its historic touchdown Thursday, January 3, 2019. Now, the China National Space Administration (CNSA) has released pictures from the mission, which show a 360-degree panoramic image made by the lunar probe, the Huffington Post reports.

The panorama (Figure 1) was taken by the Chang’e-4 spacecraft, which shows the Yutu 2 (also known as the Jade Rabbit 2) rover and its tire tracks against the moon’s rocky, crater-filled surface. A high-resolution version of the image can be found on the CNSA website.

For a different perspective, below is the panorama stitched together as a full-circle view (Figure 2). 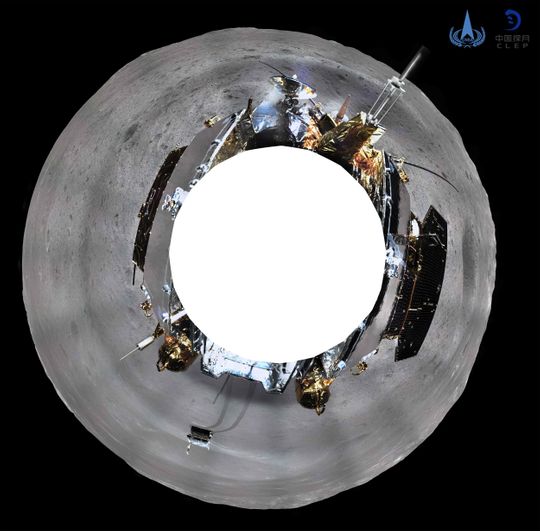 Since their touchdown, the space vehicles reside in the South Pole-Aitken Basin, specifically within the 115-mile-wide Von Kármán Crater on the moon’s dark side. According to the Huffington Post, Chang’e-4 is currently at an altitude of -6,000 m, which was one of the mission’s intents.

“The information from the depths of the moon will be one of our focuses in the exploration,” says Li Chunlai, deputy director of the National Astronomical Observatories of China and commander in chief of the ground application system for Chang’e-4, in a Huffington Post article.

Capturing the moment, the two space vehicles even snapped pictures of each other as they continue to explore the far-side crater.

In addition to descent, terrain, and panoramic cameras, the mission includes subsurface penetrating radar to identify the moon’s near surface structure, and an infrared spectrometer to examine the chemical composition of lunar samples, according to eoPortal.

Since the region is shielded from Earth’s electromagnetic interference, the probe also “can ‘listen’ to the deeper reaches of the cosmos,” explains Tongjie Liu to eoPortal, who is deputy director of the CNSA’s Lunar Exploration and Space Program Center.