Two Chinese teams working with quantum encryption and entanglement have achieved two more goals toward building a quantum space-based communication network. In the first experiment, one team succeeded in sending quantum keys from a satellite to two ground stations. In the second, another team sent entangled photons from the ground to a satellite. Both teams were made up of researchers from several institutions in China and both have published their results in the journal Nature.

Quantum-based networks have been proposed as the next innovation for both speeding up and sending more information through communications networks—to that end, teams in countries such as Japan, the U.S. and China have been working hard to better understand how to actually create them. Most in the field agree that national, international and global quantum networks will require data to be sent at least partially via satellites because traditional media such as fiber cable results in too much interference and data loss. Quantum networks are also theorized to be hack-proof because observing the keys that are used to unlock the data would destroy them due to their quantum nature. In this new effort, the two research teams have fulfilled the second and third goals (the first was to break the distance record for sending entangled particles and was achieved this past June) outlined by officials directing that country’s Quantum Experiments at Space Scale project, which involves making use of the Micius satellite—the first sent aloft to conduct quantum networking experiments.

The first team reports that they have successfully transmitted multiple quantum keys from the satellite to two ground-based stations in China—one in Xinglong the other in Nanshan. The distance involved was between 645 and 1,200 kilometers. The main result of the experiment was proving that it could be done.

The second team reported that they successfully sent entangled particles from ground stations in China to the satellite, complementing their experiments in June, in which the process was reversed.

In achieving their goals, the Chinese researchers have moved to the forefront of quantum-based network communications and have demonstrated that the country’s leaders are serious about implementing the first global quantum system over the course of the next decade. 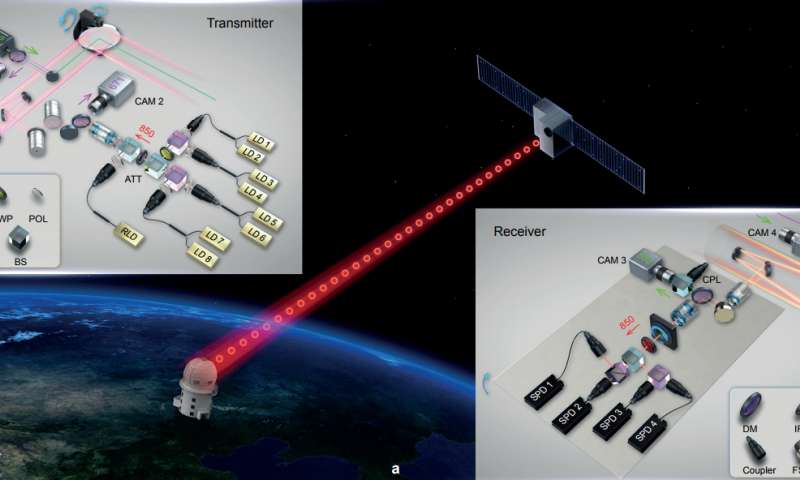 Illustration of the experimental set-up in the 1st paper. (Image Credit: Nature)