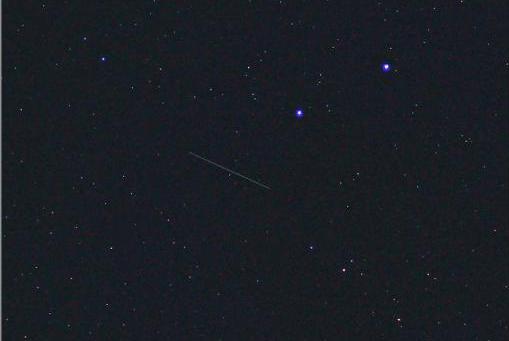 Marco Langbroek is a satellite tracker. But occasionally, his photographs spot chunks of space debris, too.

Kimbrough and Whitson successfully installed three new thermal shields, but the fourth got away.

In a series of images captured by Langbroek’s Canon EOS 60D DSLR camera and a Samyang 1.4/85 mm lens, a faint, thin, gray streak can be seen orbiting out in front of the International Space Station. Langbroek published the images on his blog.

Measuring roughly five feet by two feet, the shield is large enough to be seen through binoculars from Earth. The shield will likely remain in orbit for a couple of months before dropping into the atmosphere, where it will be burned up.

“The item poses very little risk to navigation, and an accidental release like this is not unexpected given the complexity and challenges of working outside during a spacewalk,” Holger Krag, head of the European Space Agency’s Space Debris Office, said in a news release.

Though the escaped thermal shield is unlikely to cause problems, the massive amounts of space debris circling Earth is a topic of concern for space agencies and communication companies around the globe. Even small metal fragments can do series damage to a satellite or probe.

A variety of solutions for the problem of space debris have been proposed, including lasers, magnets and even a Pac-Man-like trash-eating space probe.

Those solutions and others will be discussed later this month at the 7th European Conference on Space Debris hosted by ESA’s Space Debris Office.