Nicole Peck and Zhan Wang have been awarded first place in this year’s Sustainability Innovation Student Challenge Award (SISCA) competition at Caltech. The two scientists have engineered a new technology for clean chemistry that will save energy and lessen impact of leftover chemicals on the environment. The SISCA program, launched in 2009, was created and sponsored by the Dow Chemical Co., with matching support for the Caltech prize from the Resnick Sustainability Institute. 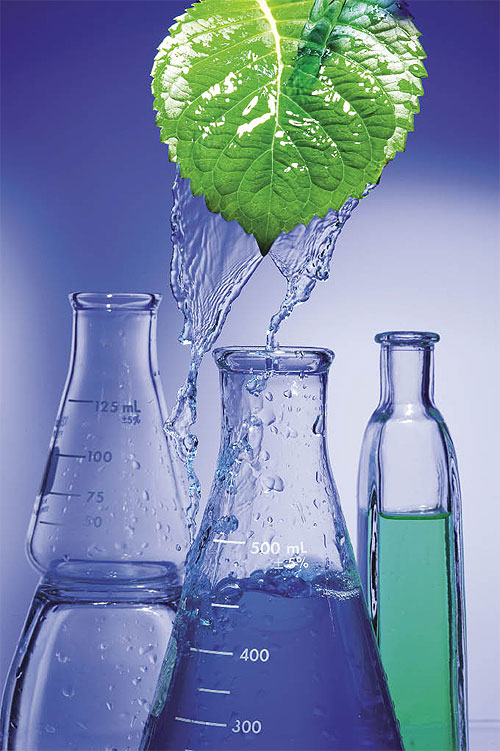 To promote forward thinking in social and environmental responsibility, SISCA acknowledges the energy, commitment and enthusiasm of the students and their university professors, sponsors and facilitators who support their sustainability innovations and efforts in continued excellence. The program has continued to expand and now engages students from 17 universities around the world.

Wang and Peck have used “biocatalysis,” a technique for development of enzymatic alternatives to traditional transition metal catalysis. This means that biological agents, which use less energy for processing and leave no harmful residue, can be used to speed reactions important in the production of commodity chemicals (such as insecticides and pharmaceuticals). Specifically, the two scientists engineered cytochrome P450 enzymes to perform carbene transfer, the carbon analogue of P450’s native monooxygenation chemistry. Their interdisciplinary approach toward catalysis combines protein engineering with transition metal chemistry to offer a sustainable method for synthesizing bioactive cyclopropanes. Along with some recent Caltech grads from their lab, Wang and Peck have already started a small company to begin making commodity chemicals using this process.

Caltech’s runner up for the 2013 SISCA competition is Raymond Weitekamp, a fourth year graduate student. His project focused on lowering costs and avoiding harmful waste products in certain manufacturing processes by making some key inputs recyclable. Weitekamp’s core discovery is a method of reactivating “dead” catalysts with light—a significant step towards achieving truly cradle-to-cradle olefin metathesis chemistry. Specifically, Weitekamp developed a waste-free synthesis of a new kind of photoresist, with immediate applications in green microfabrication. This invention may improve the energy efficiency of high-tech device manufacture, including integrated circuits, medical devices and MEMS.

“The essence of the SISCA award is to encourage the most promising and innovative students to find new ways to combine disciplines to address the challenges that face the earth’s future. Once again, Caltech has delivered great ideas and potential solutions,” said Eunice Heath, Global Director of Sustainability at Dow.

Dr. Harry Atwater, Resnick Sustainability Institute Director and a Howard Hughes Professor and Professor of Applied Physics and Materials Science at Caltech, explained, “The future is, to a large degree, in the hands of scientists who have the creativity to move beyond current approaches to hard problems and discover new ways of transcending costs of many of the man-made challenges created in our environment.”