Suha Abushamma, MD, was one of the faces of the controversial travel ban executive order signed by President Donald Trump at the end of January. Though she held a valid visa, her reentry to the U.S. following a trip to visit family in Saudi Arabia was blocked in the hours following the implementation of the order. And because she withdrew her visa before boarding an unexpected return flight to the Middle East, even the federal court’s freeze on the executive order didn’t give Abushamma a clear pathway back into the country.

Abushamma’s situation was taken up by the media, helped inspire an open letter urging action, and stirred a silent protest by her colleagues at Cleveland Clinic, where she is a first-year resident.

Yesterday, Cleveland Clinic leadership surprised Abushamma’s colleagues with the news that the young physician has returned to the U.S.

Abushamma’s reentry was secured by a team of attorneys, including longtime legal representatives of Cleveland Clinic. They jokingly noted that Abushamma’s experience as a medical resident helped condition her to be an ideal legal client since she was ready to answer questions at all hours of the day or night.

At a press conference, Abushamma refrained from any overt criticism of the federal policy that delayed her return to the U.S. Instead, she celebrated her homecoming.

“First let me start by saying how happy I am to be back here in Cleveland with my friends, my fiancé and all the people I consider a part of my family,” Abushamma said in a prepared statement. “I missed everyone so much. I am excited to continue my work here at Cleveland Clinic, where I can focus on my medical career and most importantly caring for patients.”

Abushamma went on to explain what inspired her to pursue her medical career in the U.S. 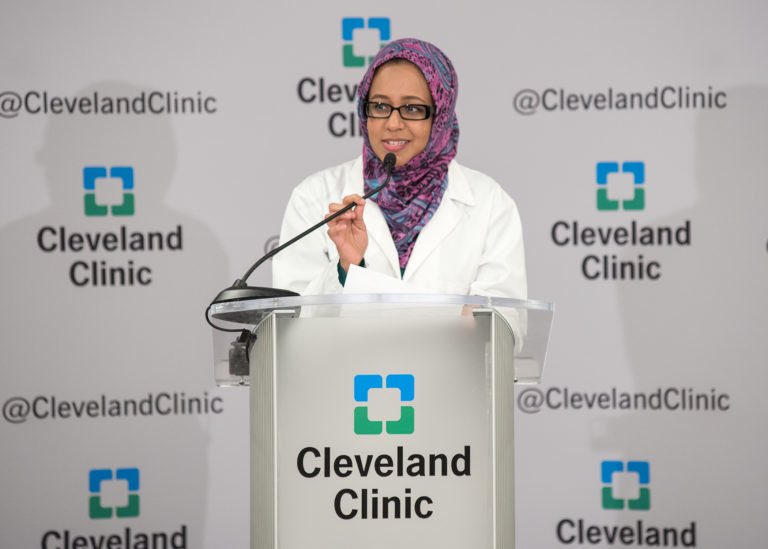 Suha Abushamma, MD, speaks at a press conference announcing her return to the U.S. after initially being denied reentry under the dictates of the Trump administration’s travel ban. (Image credit: Cleveland Clinic)

While acknowledging the institution is operating in “a complicated time,” Cleveland Clinic leadership sought to remove themselves from the political firestorm surrounding the travel ban.

“If you look around the room and look at our residents here, they’re from all over the world, and we really embrace that diversity,” said Eileen Shiel, executive director of corporate communications. “We’re trying to stay out of the politics of this and really focus on making sure that we’re doing the right thing for our folks, for our employers, our caregivers, our researchers, our residents, and our fellows who are very important to advancing patient care. So we’re not taking a political stance at this point, but we are doing a lot of work behind the scenes to try and influence change.”

Shiel also confirmed Cleveland Clinic is planning to go ahead with their upcoming fundraiser at Trump’s Mar-a-Lago resort, noting the logistical difficulties of shifting such a major event mere weeks before it is set to take place. The location of the fundraiser was another point of contention in the open letter, which has been signed by over 1500 healthcare professionals.