Expensive rare-earth magnets that power high-performance motors could be on the wane within a few years thanks to new materials now emerging from research labs.

Motor manufacturers that want to impress engineers often bring up the fact that their high-performance motors use rare-earth magnets. But that may soon change. Don’t be surprised if a salesperson someday walks into your facility boasting of motors powered by iron-nitride, manganese-bismuth, or some other kind of newly synthesized magnetic material. The reason: Research coming out of a program funded by the Department of Energy (DOE) looks as though in the foreseeable future, it could bring super-strong magnets without the need for exotic neodymium, samarium or other traditional rare earths. 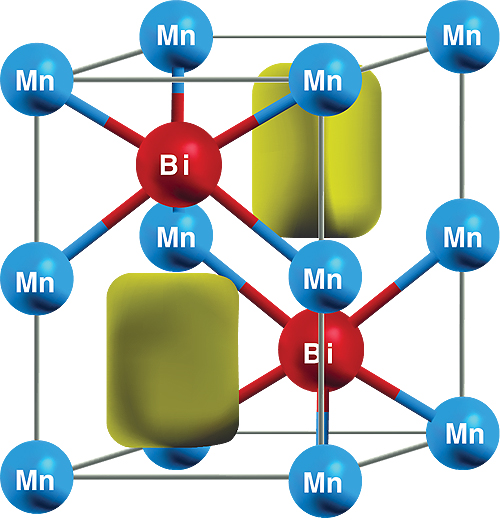 This is what the low-temperature MnBi structure looks like (with green areas indicating areas of low electron density). MnBi is being studied at PNNL as a candidate for replacing rare-earth magnets, particularly when doped with other elements such as cobalt and iron.

No question that traditional rare-earth magnets are strong. NdFeB magnets, for example, have an energy product ((BH)max) of about 60 megagauss-oersteds (MGOe). Ordinary Alnico magnets might hit 5.5 MGOe. The problem is dysprosium, neodymium and samarium rare-earth materials normally used in magnets can be expensive. Moreover, there have been problems getting a reliable supply of them, especially dysprosium.

These difficulties have motivated a quest to find rare-earth alternatives. One such effort by the DOE is beginning to blossom. The DOE’s REACT (Rare Earth Alternatives in Critical Technologies) program has aimed to find low-cost and abundant replacement materials for rare earths. At least two of the projects coming out of REACT look as though they could be commercialized. And several others hold promise as well.

The magnets that may come the closest to replacing traditional rare-earth devices are made from a special type of iron nitride. The process of synthesizing this material uses the same basic idea employed for producing most exotic magnets: Start with raw materials consisting of iron and nitrogen, then form a specific compound of Fe16N2 with the right microstructure. The resulting iron-nitride permanent magnets have a theoretical energy product as high as 134 MGOe, more than double that of today’s rare earth devices.

“Ten years ago, almost nobody thought these magnets could be made. The material is a metastable phase and its magnetism couldn’t be explained by any existing theory,” said Jian-Ping Wang, professor of electrical and computer engineering at the University of Minnesota. Wang heads up the REACT iron-nitride-based magnet effort. “We have been investigating and making the material in thin-film formats and in small amounts for eight years, but the REACT program gave us the money to figure out how to make it in bulk,” he said.

One of the fabrication techniques developed by Wang’s group involves exposing iron wire or sheet to an atomic nitrogen precursor to form a nitridized iron. Using this method, Wang’s team has been able to produce material exhibiting an energy product up to 10 MGOe during the first phase of the program. Based on calculations, the resulting permanent magnets may have an energy product theoretically as high as 33.5 MGOe when the Fe16Na2 crystals are isotropic, rising to 134 MGOe when anisotropic.

Thus, getting the right kind of anisotropic crystals is a key to boosting magnet strength. Wang’s group gets the asymmetry they need by applying a tensile force parallel to one of the crystal axes to distort it while in the presence of the nitrogen. The structure that results is called a body centered tetragonal crystalline structure with nitrogen atoms implanted in interstitial spaces between iron atoms.

Wang’s term for this kind of maneuvering is strain engineering. The group manipulates crystal structure in other ways to get specific magnetic qualities such as a high coercivity, the degree to which a magnet resists influence from external magnetic fields. High coercivity results through introducing magnetic-domain wall-pinning sites in the magnet material. The pinning sites come from putting defects into the iron crystal lattice, either by controlling the tensile stress during fabrication or by introducing some kind of dopant in the atmosphere before exposing the iron to nitrogen.

Wang’s group uses other kinds of grain-boundary engineering as well, such as introducing non-magnetic powders sized on the order of tens of nanometers to function as the grain boundaries for Fe16Na2 after the material gets pressed. But Wang is vague about the specifics of the processes his group has developed, and understandably so. “We haven’t published details because there is a lot of competition in this area. We have a great team that includes members from Oak Ridge National Lab, Advanced Materials Corp, IAP Research Inc., and Georgia Tech. But one recent consortium effort in Japan to develop better permanent magnets is perhaps 100 times larger than ours. We get email all the time asking about the progress we’re making,” he said.

There has been enough progress on iron-nitride magnets at the University of Minnesota to spin off a commercial venture in the field called Nion Magnetics. Nevertheless, said Wang, “We have overcome the most difficult obstacle by successfully demonstrating the feasibility of fabricating Fe16N2 bulk permanent magnets. However, we still have a lot to do. The REACT funding is over next March. We’ll need to find support thereafter to improve the energy product up to and beyond the level of today’s best rare-earth magnets.”

Better magnets for hot times
Rare-earth magnets often get applied where temperatures are relatively warm, as with high duty cycle motors and actuators. That explains the reason for the interest in magnets made from manganese-bismuth. MnBi magnets actually get stronger as temperatures rise, and their ability to withstand the influence of external magnetic fields rises rapidly with temperature, hitting a maximum at about 512° F.

The problem with MnBi is that though it’s good at withstanding external magnetic fields, it is not nearly as powerful as conventional rare-earth magnets, even at high temperatures. But a research group at the Pacific Northwest National Lab (PNNL) aims to improve this behavior.

“Our goal is to get MnBi magnets exhibiting an energy product of 10 MGOe at 392° F (200° C) by the time the REACT program ends next March,” said PNNL group leader Dr. Jun Cui. “If you can get to that level, the technology is ready to be commercialized. But gauging by what we see now, there are still some scientific questions that need to be answered, and more money won’t help. What we really need is time. If we could work on these magnets for another two or three years, we could probably get them to 20 MGOe at 200° C. At that point they could seriously challenge rare-earth magnets.”

The PNNL group working on MnBi magnets. Group leader Dr. Jun Cui (fifth from the left) said the group’s goal is to get MnBi magnets exhibiting an energy product of 10 MGOe at 392° F (200° C) by the time the REACT program ends next March. “If you can get to that level, the technology is ready to be commercialized,” Cui said.

One difficulty with magnetic material at high temperatures is that the electron spin directions are thermally agitated enough to lose the ordered state in which they exist in magnetized state. High-strength neodymium iron boron magnets often use the rare earth element dysprosium to enable high-temperature operation by serving as pins at the crystal grain boundaries to keep the magnetic domain reversal under control.

MnBi magnets tend to work well at high temperatures because the structure of its crystal lattice changes with rising temperature in a way that favors magnetism. 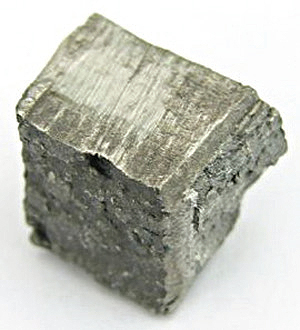 A lot of research into finding alternatives for rare earth elements in magnets aims at finding a way to eliminate the need for dysprosium, which often lets magnets operate at high temperatures. (Dysprosium metal image by Tomihahndorf at de.wikipedia.)

A variety of complicating factors make it tough to produce MnBi in the right composition. One issue is that the process of reacting manganese with bismuth takes place in a relatively slow reaction. There is about a 1000° C difference in the melting points of the two materials. So it is tricky to plan the fabrication process. “If the temperature is too high, the bismuth can vaporize. There are ways around it, but none of them are 100% perfect,” said Cui.

The group is also trying to boost the magnetic flux density of MnBi in ways that could get the material closer to the strength of ordinary rare-earth magnets. The technique they use is called exchange coupling. The idea is to combine a hard MnBi material having high coercivity with a soft magnetic material (Cui’s group is trying Co and FeCo for this) having high magnetization. Springy interactions between the two materials make the overall magnetic moment high, and remain high, under a large demagnetization field.

However, it’s not easy to fabricate an exchange-coupled magnet. The relative sizes of the MnBi and FeCo particles must stay in strict proportions. Grains of MnBi, for example, must be less than 400 nm while FeCo particles can be no more than 10 nm, and their sizes can’t stray from these dimensions by more than 20%. Otherwise, the two components behave like separate materials.

The cerium connection
Another group working at the DOE’s Ames Lab is trying to come up with magnets based on the rare earth cerium. The attraction of this idea, said project director Dr. R. William McCallum, is that cerium is a relatively common rare earth and is much less expensive than neodymium. But magnets based on cerium probably wouldn’t replace those made with conventional rare-earths one-for-one.

“We think we might be able to replace the lower grades of neodymium magnets,” said McCallum. “In terms of extrinsic properties such as magnetization and energy product, cerium magnets would fall between neodymium and non-rare-earth magnets.”

Though they would not be quite as strong, there would be a lot of demand for magnets in this category, McCallum said. “There are a lot of motor designs that would benefit from a magnet that has double the coercivity of Alnico. A sintered or bonded cerium magnet might work well in power tools or for powering windows and seats in vehicles,” he explained.

McCallum said the group has found materials that have crystal structures that would work well in magnets based on cerium. And the manufacturing process for a cerium magnet wouldn’t be much different from that for a neodymium magnet.

But the researchers have a lot of work to do before their REACT funding runs out next March. McCallum said the group is still struggling with magnetic properties governed by the microstructure of cerium compounds. “Cerium doesn’t want to stay trivalent. If we had a nice metallic compound with trivalent cerium, we’d be home free,” he said. ”But cerium wants to exist in a different valence level which exhibits magnetic properties that are about as bad as it gets. We are grappling with this issue right now.”

The payoff could be worth all the headaches. McCallum said if the project is successful, it could completely change the economics of some kinds of motors.