In the 1950s, NASA engineers picked the Mojave Desert to build a network of large radio antennas suited with parabolic dishes and receivers listening for faint radio signals. The quiet location, situated near the U.S. Army’s Fort Irwin and the small town of Goldstone, has no interference from commercial radio and television transmitters or power lines.

In 1958, it began receiving data from the Pioneer 3 mission, which was “the first attempts by the United States to send a spacecraft to the moon. Because of a malfunction with the spacecraft’s booster rocket, it lacked the velocity to make it beyond Earth’s orbit and fell back to Earth, burning up over Africa,” according to NASA Jet Propulsion Laboratory (JPL).

Before NASA moved on from Pioneer Station in 1981, it helped with several high-stakes missions, including Apollo, Mariner, Viking, and Voyager. With its impressive resume, the design was declared a National Historic Monument in 1985.

The 230-foot Mars Station is the largest and most sensitive structure at the complex, standing 24 stories tall and weighing 16 million pounds. Its satellites currently communicate with the Voyager 1 spacecraft, which launched in 1977.

According to NASA, “Voyager 1 is now more than 13 billion miles (21 billion kilometers) from Earth, making it the most distant human-made object in the universe.”

The Mojave Desert is also home to Echo Station, which serves as the complex’s current administrative center. The Echo 1 communications balloon, known as the world’s first communications satellite, inspired the station’s name. The balloon soared 1,000 miles above Earth, relaying radar and radio signals between Echo’s antenna and a New Jersey receiving station.

The next design on this Goldstone Complex tour is the Gemini Station, named after the twin star constellation. NASA JPL built the antennas for the Army, and transferred the tech to NASA in 1994.

Gemini first supported the Solar & Heliospheric Observatory (SOHO) project, which “was designed to study the internal structure of the Sun, its extensive outer atmosphere, and the origin of the solar wind—the stream of highly ionized gas that blows continuously outward through the solar system,” according to NASA.

Supporting NASA’s deep space network, you can see the layout of the Goldstone Complex in the image below. 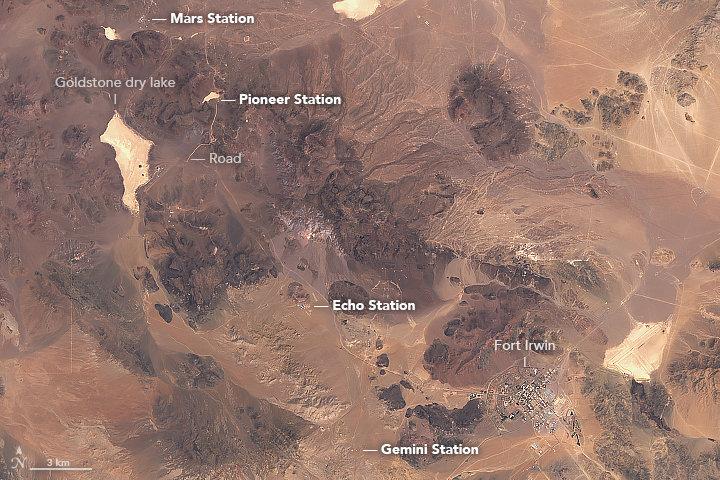