For more than a decade, Remotely Piloted Aircraft (RPA), also known as Unmanned Aircraft Systems (UAS), have captured the public’s imagination, which often mistakenly perceives these sophisticated platforms as autonomous “drones” sent to conduct surveillance operations and even engage in direct action against enemies in far off lands with minimal supervision. The reality, however, is far more prosaic and yet, in some ways, more nuanced than most realize given the infrastructure required to operate these semi-autonomous aircraft.

RPAs are an asset which allow the military to conduct various operations without directly placing the aircrew in harm’s way. Unlike directly manned aircraft, RPAs in some instances can be capable of long-endurance missions which are not limited by human factors to the same extent as traditional aircraft. However, RPAs, like any other aircraft, still require maintenance and sustainment and the infrastructure to support these activities, and for those that are armed, have the same requirements for armament test, whether on the flightline, at the intermediate level, or at depot level.

Armed RPAs especially have become a platform of choice for Precision Guided Munitions (PGMs), often referred to as “smart weapons,” which are dependent upon a variety of guidance options to make precision targeting possible, requiring less ordnance to be used to achieve a desired result and often reducing the likelihood of inadvertent collateral damage. These sophisticated PGMs require both pre-load and periodic storage test as well, and many legacy systems currently in use are simply not up to the task of efficiently testing the munitions, and/or are difficult to sustain due to obsolescence issues.

As RPAs continue to evolve and become even more predominant in warfare, and PGMs all but replace unguided munitions in the vast majority of kinetic strike applications, a window has opened to introduce greater commonality and easier sustainment utilizing the latest technological innovations to perform electronic functional test and armament test to ensure maximum mission effectiveness.

The birth of today’s modern RPAs arguably lies with efforts undertaken during World War II, building upon even earlier experimental attempts during World War I to create pilotless flying bombs or torpedoes by the U.S., U.K. and Germany, which never saw actual combat use. In 1945, American B-17 heavy bombers released 108 GB-1 Glide Bombs, consisting of a radio-controlled plywood glider with a 12-foot wing span loaded with a 2,000 pound bomb, over Cologne; the results of the raid were not impressive due to the weapon’s unreliability.

In the 1980s, Israel emerged as a leader in the use and development of unarmed UAS for intelligence, surveillance, and reconnaissance (ISR) purposes. It was an Iraq-born, Israeli immigrant to the U.S. named Abraham Karem whose “Albatross” UAS received DARPA funding, evolving into the GNAT-750. The GNAT-750 was ultimately acquired by General Atomics and became the forerunner of the MQ-1 Predator, which first went operational during the mid-1990s. Initially unarmed, the Predator saw use in the Balkans and following 9/11, was deployed in the hunt for Osama Bin Laden. This led to a CIA effort to weaponize the Predator to reduce the links of the “kill chain,” by integrating the AGM-114 Hellfire missile. By October 2001, Hellfire-armed Predators were operating in Afghanistan, and the first strike conducted by a missile-armed Predator occurred in February 2002 near the city of Khost. In 2007, the larger and more capable MQ-9 Reaper was pressed into service, augmenting the Hellfire capability with the ability to carry additional munitions such as the 500-pound GBU-12 Paveway II bomb, 500-pound GBU-38 JDAM, and even the AIM-9 Sidewinder air-to-air missile.

Today’s armament test needs for UASs are supported by three levels of test:  Organization-Level (O-Level), also referred to as flightline; Intermediate-Level (I-Level), sometimes called back shop; and Depot-Level (D-Level). The most basic test for weapons systems on the flightline is the munitions pre-load test conducted on the flightline for the stores carriage systems (e.g., pylons, ejector racks, and missile launchers) which involves detection of stray voltage and continuity of circuit to confirm that weapons can be released upon command and to ensure there is no voltage present to inadvertently fire a munition when loaded.

While stray voltage detection remains the primary concern according to Technical Orders at the flightline/O-Level, full functionality tests of “smart weapons” now require flightline test sets capable of performing much more advanced tests. The good news is that today’s technology enables more rigorous troubleshooting of both armament systems and associated optical guidance units of certain PGMs that operate using MIL-STD-1760 communications. Consequently, these advanced weapon systems found on UASs can be tested by handheld O-Level test sets that incorporate I-level and even D-level test capabilities. Additionally, the proliferation of multiple weapon systems on various UAS airframes is driving the need for test solutions that are cross-platform capable with advanced test capabilities. With these new technologies, planners now have the opportunity to provide maintainers with test sets such as those shown in the figure below  with a new generation of O-Level and I-Level armament test solutions. 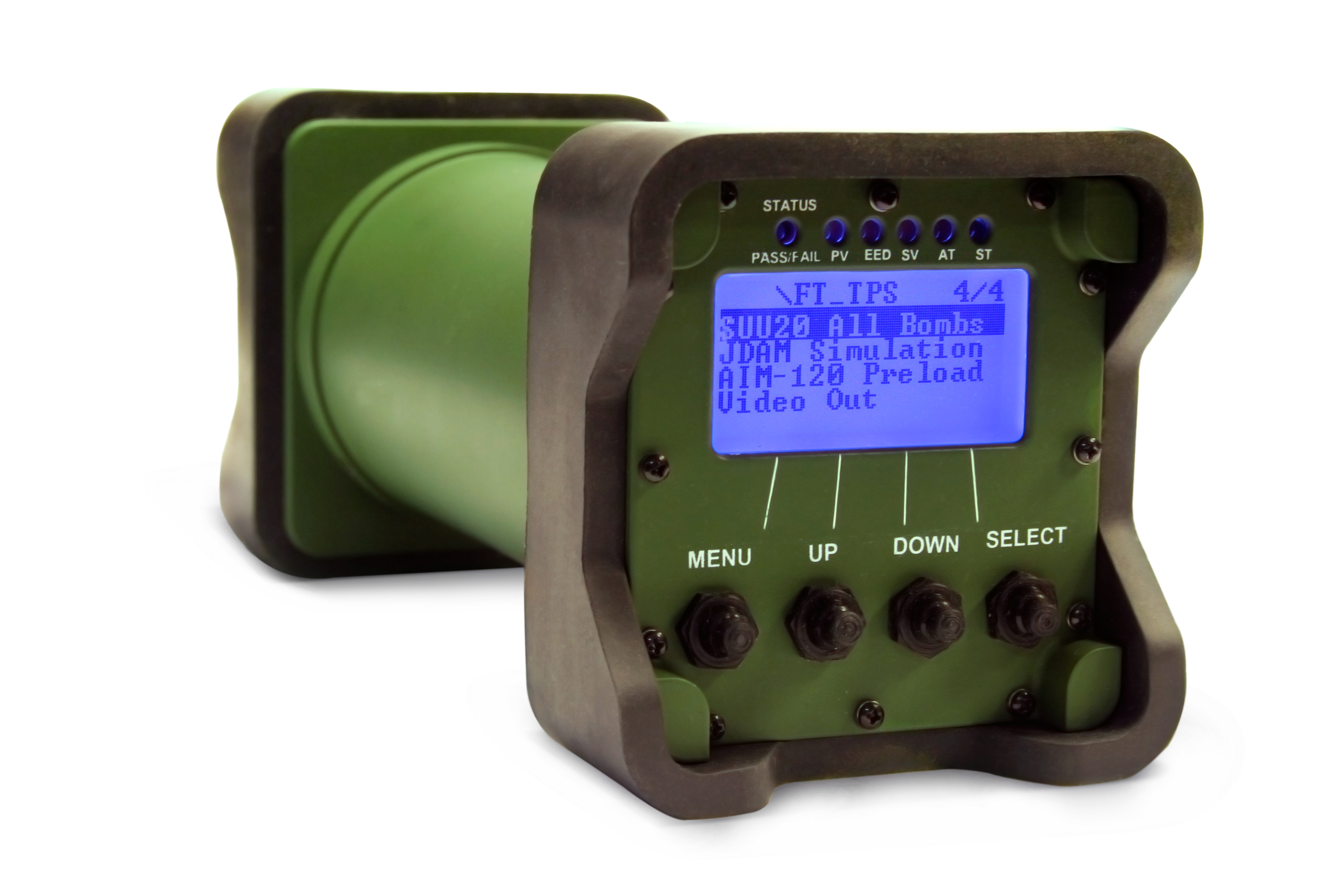 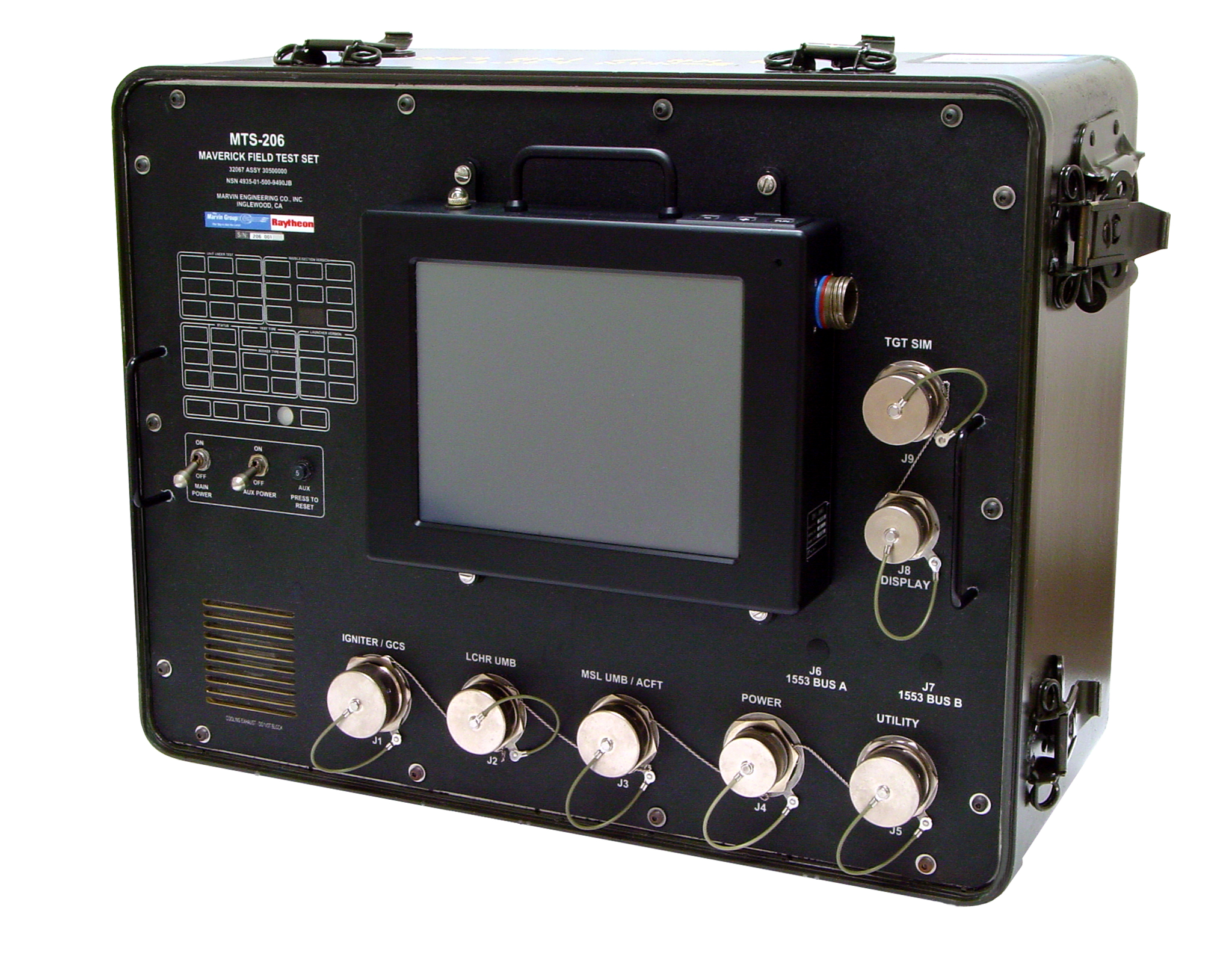 With the multi-platform test capabilities, maintainers have access to a new generation of advanced and compact test solutions for flightline and I-level test. And just as the UAS has transformed the battlefield, multiple-platform, advanced test sets are transforming O-Level and I-Level test for UASs.

Armament test equipment technology has made significant progress in recent years; while some of this technology has seen limited deployment due to budgetary constraints and long refresh cycles on such equipment, the time has come for a re-examination. With the costs of sustainment mounting due to obsolescence factors and increasingly sophisticated PGMs becoming commonplace across multiple aircraft, the opportunity exists to explore how more commonality and greater cost-savings might be realized by taking a hard look at armament test requirements across the fleet of remotely piloted aircraft as well as manned aircraft.