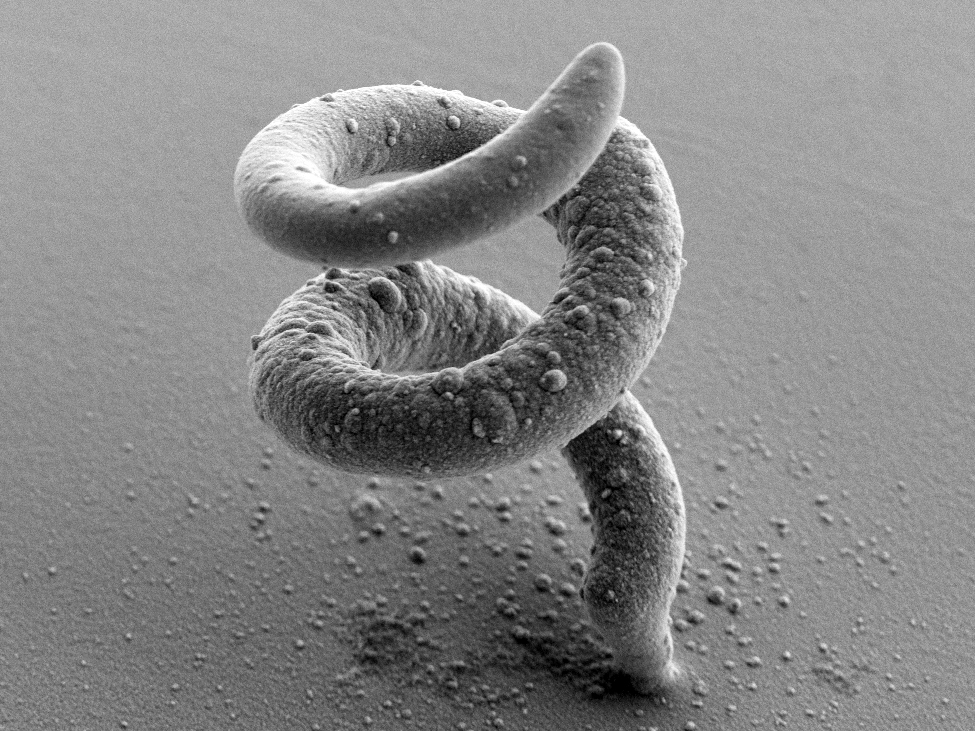 The objects shown in these microscope images have a width of 15 to 35 micrometres. In comparison, a human hair is approximately 50 micrometres wide. Credit: ETH Zurich / Luca Hirt.

A new 3-D microprinting process allows scientists to easily manufacture tiny, complex metal components. The used technology was designed by ETH researchers years ago for biological research and has now been further developed for a completely different application.

Scientists at ETH Zurich have developed a new method of 3D microprinting. This can be used to manufacture even tiny, partly overhanging structures easily and in a single step. One day, this could pave the way for the manufacture of complex watch components or microtools for keyhole surgery, for example.

In most existing 3D microprinting processes, overhanging structures can be achieved only through a workaround: during the printing process, a stencil manufactured beforehand is used as a placeholder under the overhang that is to be printed. The template must be removed once printing is complete. In the new technique developed by ETH doctoral student Luca Hirt of the Laboratory of Biosensors and Bioelectronics, the print head can also print sideways. This means that overhangs can be printed without templates.

The new technique is a refinement of the FluidFM system developed at ETH Zurich several years ago. At the heart of this system is a moveable micropipette mounted on a leaf spring, which can be positioned extremely precisely. Nowadays, FluidFM is used primarily in biological research and medicine; for example, to sort and analyse cells and to inject substances into individual cells. For three years now, the system has been sold commercially by the ETH spin-off Cytosurge.

As part of his doctoral thesis at ETH Zurich, Luca Hirt has been investigating the possibility of using FluidFM for printing processes. In particular, he is interested in using this technique to electro-deposit dissolved metals and other substances on to a conductive substrate.

Electrochemical reactions at the tip

The system now developed works as follows: a droplet of liquid is placed on a base plate made of gold. The tip of the micropipette penetrates the droplet and acts as a print head. A copper sulphate solution flows slowly and steadily through the pipette. Using an electrode, the scientists apply a voltage between the droplet and the substrate, causing a chemical reaction under the pipette aperture. The copper sulphate emerging from the pipette reacts to form solid copper, which is deposited on the base plate as a tiny 3D pixel.

Using a computer to control the movement of the micropipette, the researchers can print three-dimensional objects pixel by pixel and layer by layer. The spatial resolution of this process depends on the size of the pipette’s aperture, which in turn determines the size of the copper deposits. At present, the scientists can produce individual 3D pixels with diameters ranging from 800 nanometres to more than five micrometres, and can combine these to form larger 3D objects. In an initial feasibility study, various spectacular microscopic objects were created. They consist of pure, non-porous copper and are mechanically stable, as studies by scientists from the group led by Ralph Spolenak, Professor of Nanometallurgy at ETH Zurich, showed. A particularly impressive object consists of three nested microspirals, which the ETH researchers manufactured in a single step and without using a template.

“This method can be used to print not only copper but also other metals,” says Tomaso Zambelli, associate lecturer and group leader at the Laboratory of Biosensors and Bioelectronics at ETH Zurich. And FluidFM may even be suitable for 3D printing with polymers and composite materials, he says.

An advantage of the new method over other 3D microprinting processes is that the forces acting on the tip of the pipette can be measured via the deflection of the leaf spring on which the micropipette is mounted. “We can use this signal as feedback. Unlike other 3D printing systems, ours can detect which areas of the object have already been printed,” says Hirt. This will make it easier to automate the printing process.

Successful collaboration with a spin-off

The long-established collaboration between ETH Zurich and Cytosurge will also continue. “It is a case of mutual give and take, from which both sides profit,” says Zambelli. Cytosurge provides ETH with its latest equipment, which the ETH scientists are able to use for their research. They in turn help to test the devices and offer suggestions for improvements and further development.