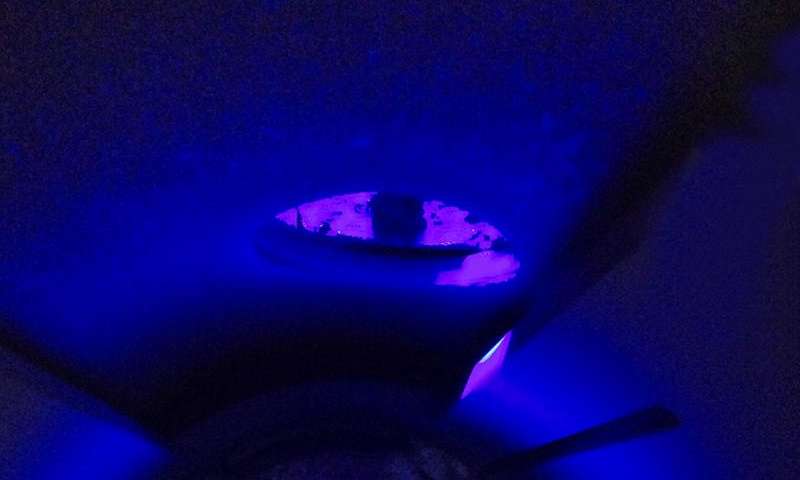 The view from above in the furnace interior shows the glass beads which are produced by the Fraunhofer ISC and which are used for experiments in space research. Credit: Fraunhofer ISC

How are asteroids and planets formed from stony particles? This question is being explored in an experiment by scientists from the universities of Münster and Braunschweig. For the investigation, Fraunhofer researchers have developed beads made of a special type of glass. They form the composition of the rock particles as naturally as possible on a small scale.

The earth is 4.57 billion years old – an unimaginable temporal dimension. To understand how the blue planet was first formed long ago, scientists today are analyzing other rock bodies from our solar system, such as fragments of asteroids that have arrived on Earth as meteorites after collisions in space.

According to current knowledge, many planetary bodies were formed through the merger of chondrules – which are silicate beads that are about 0.1 to 3 mm wide. How does this cosmic rock formation process work, though? That is what scientists from the Institute of Planetology at the Westphalian Wilhelms University of Münster and the Technical University of Braunschweig are investigating in unique experiments. They are being supported by researchers at the Fraunhofer Institute for Silicate Research ISC in Würzburg. The scientists have developed a special glass for the project and formed tiny beads from it to represent the chondrules as realistically as possible.

Previous findings indicate that the original particles had the consistency of hot, liquid glass before they aggregated into larger conglomerates of rock, cooled down and crystallized. “This glass is very different from the material composition of technical glasses with which we are usually working,” explains Dr. Martin Kilo, Head of Glass Unit at the ISC. The chemical composition of a glass determines certain physical properties, though, such as the melting and crystallization behavior. Both play a central role in the development process of larger rock bodies. “That’s why we have used modeling programs in advance to calculate which melting conditions prevail for the required compositions, how stable the glass particles are, as well as the temperatures and forms at which they crystallize,” says Dr. Kilo. Another challenge was to give the glass particles their spherical shape. To do so, the experts use two different procedures.

In the first approach, rough glass gravel is prepared, sifted to the right size and then rounded out by thermal treatment. The second solution is to cut glass plates into small cubes and to grind them mechanically – very similar to the marble production.

For the experiment, the researchers from Würzburg produced several versions of their beads, each of which differs slightly in material composition. These beads were first heated in special melting units in which the temperature and atmosphere can be adjusted precisely. Those beads which had characteristics closest to the theoretical model after this test melting were selected for the project.

Experiments in the drop tower

The research team from the Universities of Münster and Braunschweig now uses the cosmic glass beads from the ISC in experiments at the Center for Applied Space Technology and Microgravity (ZARM) in Bremen: The drop tower which is operated there surrounds a 120-meter-high steel drop tube, in which a high-vacuum is kept. Through a catapult system, the glass beads are shot in a capsule to the tip of the drop tube. As a result, approximately 9.5 seconds of weightlessness are achieved – the same conditions as in space. During this period, the glass beads are heated up to 1100 °C.

During the dropping procedure, the beads can collide and form larger clusters. The experts record the collision behavior with high-speed cameras that colleagues at the TU Braunschweig assess. “Our colleagues from Münster then investigate how the beads merge, whether the clusters are composed of a homogeneous composition or whether the form of the individual beads is still recognizable, and whether and to what extent crystallization results,” Dr. Kilo explains. In the next step, the planetologists will compare the results with observations of meteorites to then draw conclusions about the validity of their theoretical models.