(A, B) can generate high-temperature and high-pressure condition such as earth interior within the laboratory by placing the sample between the diamonds for laser-heating at high pressures. Credit: Kenji Ohta

Hydrogen is the most abundant element in the universe, and a major component of stars such as the Sun, as well as gas-giant planets such as Jupiter and Saturn. In recent years, hydrogen’s behavior at high temperature and high pressure has been in the realm of interest not only for planetary science, but also for fields such as materials science for the purpose of achieving a hydrogen energy society.

However, since hydrogen is both a highly diffusive and highly reactive element, it is difficult to maintain its stability in high-temperature, high-pressure equipment for use in experimentation, which has greatly impeded research on high temperature, high pressure hydrogen.

A research group of Osaka University and Tokyo Institute of Technology successfully developed technology which stabilizes hydrogen in a high-temperature, high-pressure environment without chemical reactions with surrounding matter.

Katsuya Shimizu, Professor of Osaka University and Kenji Ohta, Lecturer, Tokyo Institute of Technology in collaboration with the Japan Synchrotron Radiation Research Institute investigated the phase transformation of hot dense fluid hydrogen using static high-pressure laser-heating experiments in a diamond anvil cell. The results showed anomalies in the heating efficiency that are likely to be attributed to the phase transition from a diatomic to monoatomic fluid hydrogen (plasma phase transition) in the pressure range between 82 and 106 GPa. This study imposes tighter constraints on the location of the hydrogen plasma phase transition boundary and suggests higher critical point than that predicted by the theoretical calculations. 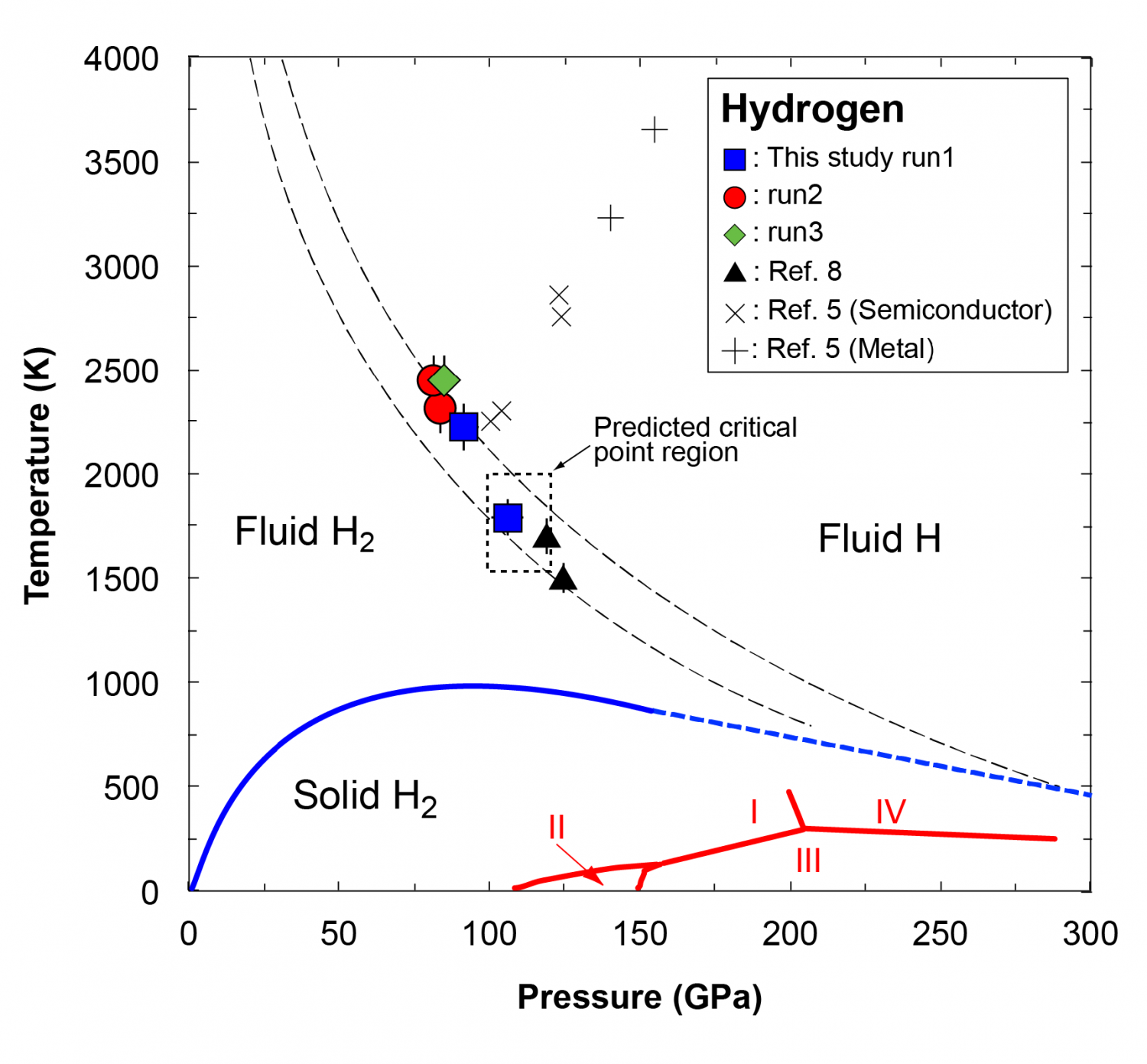 The observed plasma phase transition of high-temperature, high-density hydrogen fluid may be strongly related to insulator-metal transition, and these results may lead to the clarification of the internal structure and magnetic field of gas planets primarily made up of hydrogen, such as Jupiter and Saturn.

Additionally, it is expected that the clarification of the correlation between temperature and pressure in hydrogen will lead to the synthesis of a solid metallic hydrogen in which superconducting transition is expected to take place at a relatively high temperature, or nearly room temperature.