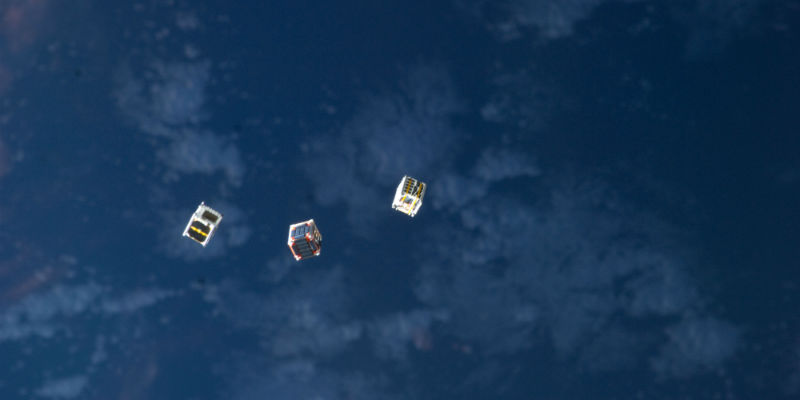 NASA opened a new avenue for exploration and technology development with awards to three companies to launch missions dedicated to CubeSats.

The tiny, box-shaped spacecraft have emerged in the last 16 years as a quick, viable way to test components and techniques that, if proven, can be applied to much larger missions where the stakes are far greater than a simple, 4-inch cube. The price tag for each mission is one-tenth the cost of the least-expensive traditional launcher.

Proposals were accepted from Firefly Space Systems, RocketLabs USA and Virgin Galactic to conduct demonstration CubeSat launches as soon as 2017. The first phase of launches are expected to be completed by the end of calendar year 2018.

The total value of the three contracts is $17.15 million, with $6.95 million awarded to Rocket Lab, $5.5 million to Firefly Space Systems and $4.7 million to Virgin Galactic. NASA officials anticipate more Venture Class launches to serve SmallSats in the future.

“The award of these contracts represent NASA’s investment in the future of the commercial launch industry for SmallSats,” said Mark Wiese, chief of the Flight Projects Office for NASA’s Launch Services Program, or LSP, based at Kennedy Space Center. “Although the three launch vehicles are new in aerospace, their designs are advanced sufficiently that we feel comfortable relying on them for these missions. The companies have also received interest from other non-NASA customers in using their launch services, leveraging private investment for their development costs, tied to their vision to serve a viable commercial data market.”

Many of the CubeSat missions undertaken so far have related to Earth observation with instruments focused on a single element of research such as resource management. That focus is expected to remain in the future as scientists and engineers produce ever-more-capable spacecraft that can quickly deliver technological advances to Earth science arenas.

“Emerging small launch vehicles have great potential to expand the use of small satellites as integral components of NASA’s Earth science orbital portfolio,” said Michael Freilich, director of NASA’s Earth Science Division. “Today’s CubeSat technology fosters hands-on engineering and flight research training; with the addition of reliable, affordable, and dedicated access to space on small launchers, constellations of SmallSats and CubeSats could revolutionize our science-based spaceborne Earth-observing systems and capabilities. We’re eager to work with the VCLS providers as they develop new launch capabilities for the Earth science community.”

The Earth Science Division of NASA’s Science Mission Directorate in Washington has partnered with LSP to fund the VCLS contracts. These VCLS launches of small satellites are able to tolerate a higher level of risk than larger missions and will demonstrate, and help mitigate risks associated with, the use of small launch vehicles providing dedicated access to space for future small spacecraft and missions.

“Director Freilich’s sponsorship was essential to enabling this class of launch vehicle to become available in the near future,” said Jim Norman, director of LSP. “This type of support will allow the U.S. commercial space launch industry to be early to market with this new capability and bodes well for the future.”

Without a dedicated launcher, CubeSats have flown into orbit as auxiliary payloads that are released after the booster has achieved the primary mission. They have also been sprung into the orbital void from canisters aboard the International Space Station to conduct research missions. In both cases though, the CubeSats are at the mercy of the primary payload and the orbit it must fly in.

“The CubeSat and small satellite engineers and scientists are coming up with missions that justify flying unique orbits and at altitudes that are not available if we only fly as secondary payloads,” said Garrett Skrobot, lead for the Educational Launch of Nanosatellites, or ELaNa, mission for LSP. “These are still experimental satellites, but the technology they are employing is mature enough to use in these new ways.”

The CubeSat Launch Initiative enables the launch of CubeSat projects designed, built and operated by students, teachers and faculty. CSLI provides access to space for CubeSats developed by the NASA Centers and programs, educational institutions and non-profit organizations giving all these CubeSat developers access to a low-cost pathway to conduct research in the areas of science, exploration, technology development, education or operations. ELaNa Missions, managed by the Launch Services Program at KSC, provide a ride-share launch for the CubeSats selected through CSLI.

Also, there is not much room available for the secondary flights, so there is a backlog of more than 50 missions that will be ready during the next three years, and more are being developed all the time.

That’s why NASA solicited the private launch industry for rockets that could carry potentially dozens of CubeSats into space, resulting in dedicated launch costs much lower than available now for primary missions. As it did with contracts to take cargo to the space station on private rockets, NASA sought to buy a service rather than develop its own new launch system. A single launch will be able to carry 15 to 30 CubeSats.

Firefly Space Systems, based in Cedar Park, Texas, is developing its Alpha vehicle that uses an aerospike first stage engine powered by refined kerosene and liquid oxygen. The rocket is tailored to payloads weighing about 880 pounds, which means it could launch a variety of CubeSats all at once or a single small satellite or a mix.

“Being recognized by NASA with a Venture Class Launch Services contract is a tremendous honor for the Firefly team,” said Thomas Markusic, Firefly’s chief executive officer. “We have worked tirelessly during the last 18 months to develop Firefly Alpha, a vehicle that will be different from anything that has come before it. NASA’s vote of confidence in our technology and team is a significant boost to our efforts of making space for everyone.

“VCLS is a vital step in a mission that will grow not only Firefly Space Systems but the small satellite launch industry as a whole,” Markusic said. “For many small satellite operators, access to a dedicated and affordable launch vehicle is a real-world stumbling block.”

Rocket Lab USA, based in Los Angeles, plans to use its carbon-composite Electron rocket to send CubeSats into space. The Electron is powered by Rocket Lab’s Rutherford engine, a 3D printed engine that uses batteries to drive its pumps. Electron is designed to loft about 330 pounds to a 310-mile-high, sun-sychronous orbit, so the rocket can a combination of CubeSats or small satellites.

“Rocket Lab USA is looking forward to working to fulfill NASA’s Venture Class mission objectives through increased launch opportunities from small, dedicated and affordable launch vehicles,” said Peter Beck, Rocket Lab’s chief executive officer. “As the vehicle closest to completion in this launch class, we’re excited to support NASA and other aerospace companies that have previously been unable to reach orbit due to prohibitive cost and the unavailability of appropriate and timely launch options.”

Virgin Galactic’s LauncherOne is an air-launched system that can optimize each mission to customer requirements by operating from a variety of launch sites. Virgin Galactic has full, private funding in place for the program, which includes a dedicated and world-class team of 150 experienced aerospace professionals working from a state-of-the-art 150,000 square foot manufacturing and design facility in Long Beach, California.

“We are excited to add NASA to our growing list of customers who have signed contracts to launch small satellites onboard LauncherOne,” said Virgin Galactic president Steve Isakowitz. “When paired with affordable and responsive launch vehicles like LauncherOne, small satellites create big opportunities for business and for science. We’re designing LauncherOne to offer market-leading pricing and flexibility to help our customers make the most of their missions, and we are excited to work with NASA to help our nation’s scientists and researchers get their satellites into space.”

Two of the companies are considering launch options from Kennedy’s spaceport. Firefly Space System’s Alpha vehicle and Rocket Lab’s Electron vehicle can be launched from a number of locations. Virgin Galactic expects to launch from its base at Mojave, California, but it has the ability to launch from anywhere in the world.

Measuring about the size of a coffee mug and weighing about three pounds, CubeSats carry experimental components and are inexpensive and modular enough to be built by enterprising university and high school groups, technology companies and NASA researchers. The inventions and results from missions flown in Earth orbit have advanced to the point that NASA is dispatching a pair of CubeSats to Mars along with the InSight lander. The CubeSats, each built in a modular format by Jet Propulsion Laboratory and the size of a briefcase, will provide a communications relay to ground stations on Earth as Insight approaches the Red Planet and touches down on the surface.

“The payoff for our CubeSat development work has been everything we had hoped for,” Skrobot said. “The whole engineering and research community embraced the opportunity to build these little spacecraft from the start and now we are seeing entrepreneurs apply their own innovations in a variety of ways including launch. It’s all coming together to let us use technology to drive exploration further.”

The basic CubeSat module is a fraction of the size of other spacecraft. Engineers – in some cases students with teacher and NASA advisors – have fit deployable antennas and solar arrays, communications systems and even tiny thrusters inside a CubeSat chassis during a mission. At first, the missions were conducted to simply see if the concept was practical and whether usable research could be returned. With the basic components proven, engineers began more ambitious mission concepts including ones calling for multiple CubeSats to communicate with each other.

The innovations have not stopped with the components themselves, either. Teams continue to design smaller, more capable sensors, power supplies, instrumentation and communications networks that allow more flexibility and reliability in the machines. They can also be employed on other, larger vehicles since designers know that the less room instruments and vital systems take up, the more room they have to include other scientific instruments.

“CubeSats give us a much faster way to test technologies and move their designs up the readiness ladder,” Skrobot said. “Even if they don’t succeed the first time, a re-flight is not prohibitively costly and designers can apply new components or processes quickly.”

The advent of small satellite capabilities is expected to increase quickly in the United States and internationally, along with the opportunities foreseen by entrepreneurs to launch CubeSat-based networks that can transmit to anywhere in the world, monitor crops in detail and improve weather forecasting.

“We get everything from short emails to full proposals nearly every day that offer compelling missions for these CubeSats and we want to be able to try them out as quick as we can,” Skrobot said.

Learn more about how space enthusiasts can propose a mission through the CubeSat Launch Initiative through the current opportunity announcement.