The launch of Parker Solar Probe, the mission that will get closer to the Sun than any human-made object has ever gone, is quickly approaching, and on June 27, 2018, Parker Solar Probe’s heat shield—called the Thermal Protection System, or TPS—was installed on the spacecraft.

A mission 60 years in the making, Parker Solar Probe will make a historic journey to the Sun’s corona, a region of the solar atmosphere. With the help of its revolutionary heat shield, now permanently attached to the spacecraft in preparation for its August 2018 launch, the spacecraft’s orbit will carry it to within 4 million miles of the Sun’s fiercely hot surface, where it will collect unprecedented data about the inner workings of the corona.

The eight-foot-diameter heat shield will safeguard everything within its umbra, the shadow it casts on the spacecraft. At Parker Solar Probe’s closest approach to the Sun, temperatures on the heat shield will reach nearly 2,500 degrees Fahrenheit, but the spacecraft and its instruments will be kept at a relatively comfortable temperature of about 85 degrees Fahrenheit.

The heat shield is made of two panels of superheated carbon-carbon composite sandwiching a lightweight 4.5-inch-thick carbon foam core. The Sun-facing side of the heat shield is also sprayed with a specially formulated white coating to reflect as much of the Sun’s energy away from the spacecraft as possible. 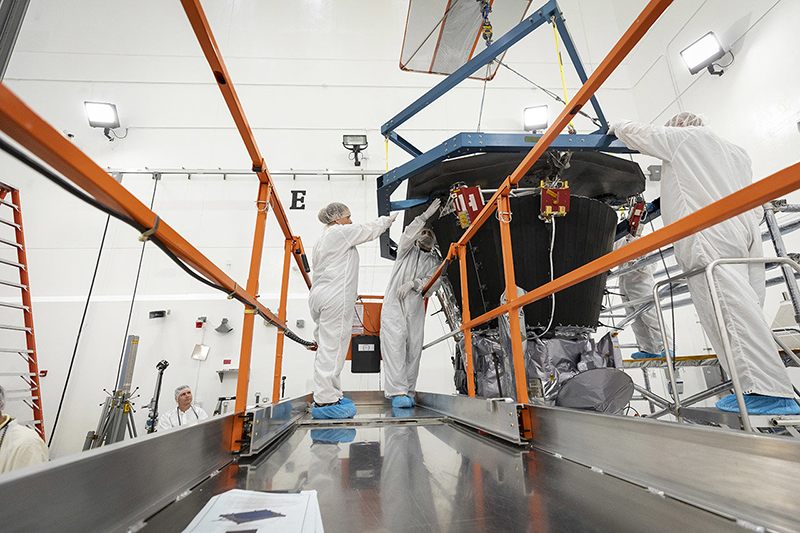 The heat shield itself weighs only about 160 pounds—here on Earth, the foam core is 97 percent air. Because Parker Solar Probe travels so fast—430,000 miles per hour at its closest approach to the Sun, fast enough to travel from Philadelphia to Washington, D.C., in about one second—the shield and spacecraft have to be light to achieve the needed orbit.

The reinstallation of the Thermal Protection System—which was briefly attached to the spacecraft during testing at the Johns Hopkins Applied Physics Lab in Laurel, Maryland, in fall 2017—marks the first time in months that Parker Solar Probe has been fully integrated. The heat shield and spacecraft underwent testing and evaluation separately at NASA’s Goddard Space Flight Center in Greenbelt, Maryland, before shipping out to Astrotech Space Operations in Titusville, Florida, in April 2018. With the recent reunification, Parker Solar Probe inches closer to launch and toward the Sun.

Parker Solar Probe is part of NASA’s Living with a Star Program, or LWS, to explore aspects of the Sun-Earth system that directly affect life and society. LWS is managed by Goddard for the Heliophysics Division of NASA’s Science Mission Directorate in Washington, D.C. The Johns Hopkins Applied Physics Laboratory manages the Parker Solar Probe mission for NASA. APL designed and built the spacecraft and will also operate it. 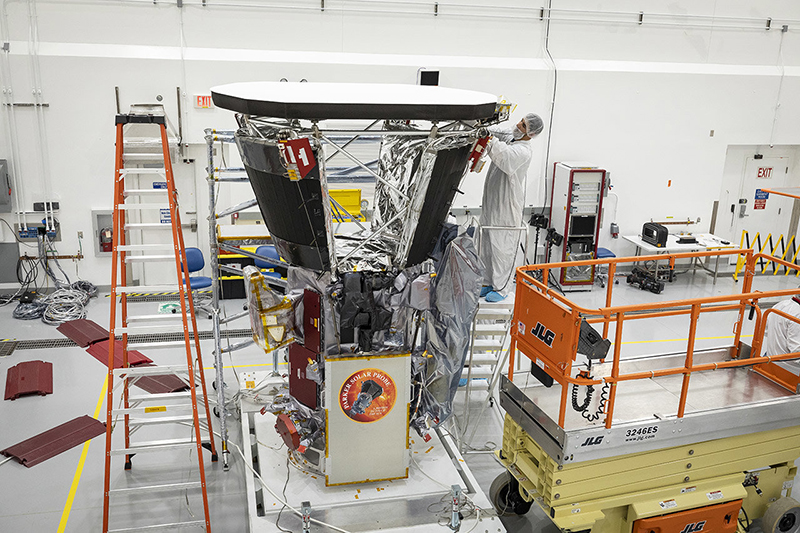