When the Millennium Footbridge opened to the public on June 10, 2000, it was the first new bridge across the River Thames in historic London in more than a century. Nearly 100,000 people used it in its first day of operation. But a mere two days later, it was ordered closed due to hazardous deck motions. Seemingly random pedestrian footfalls were causing resonance of the bridge deck, with lateral accelerations measuring up to 0.25 g. 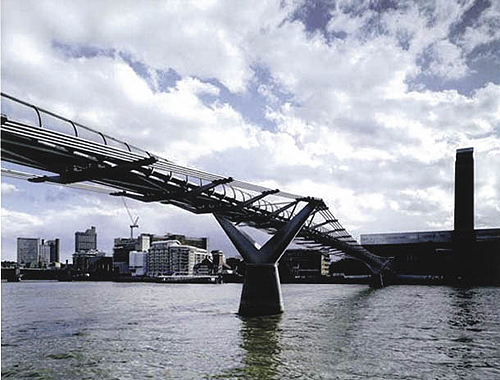 The phenomena of forced harmonic excitation of bridge structures is well understood, and has been well documented by many sources. What was unique about the Millennium Bridge was that resonance was occurring without any expected forced motion or marching. After extensive review of available video footage during the period the bridge was open, a series of tests identified a unique biodynamic feedback phenomena, “synchronous lateral footfall,” which resulted in seemingly random walking motions becoming synchronized over time among members of an unrelated group of people on the bridge.

The project team evaluated numerous concepts that would reduce or eliminate the feedback response. The most promising were: Stiffening the bridge, limiting the allowable number of people allowed on the bridge, active control, or supplemental passive damping. Damping was eventually chosen as the preferred solution.

The most direct application to the problem used supplemental viscous damping devices to elevate total structural damping levels to the 20% critical range, compared to approximately 0.5% critical damping for the as-built structure. The design concept was based on the premise that added damping would reduce resonant deflections to a suitably low level.

For a simple spring-mass-damper system, amplitude under steady-state forced resonance is:

= By definition, the magnification factor of the resonant response

Thus, if a simple first order system with 0.5% critical damping is excited by forced resonance, the magnification factor is:

If damping in the system is elevated to 20% critical, then the magnification substantially reduces to:

The damping devices used on the bridge resulted in five major design issues, some of which are unique to this particular structure.

Taylor Devices, a manufacturer of damping products, proposed a unique solution, a damper that was previously used exclusively by NASA and other U.S. Government agencies for space-based optical systems. These previous applications had similar requirements for long life and high resolution at low amplitudes, but required relatively low damper forces from small, lightweight design envelopes. The most unique element of this design is a frictionless seal made from a welded metal bellows. This type of seal does not slide, but rather flexes without hysteresis as the damper moves. 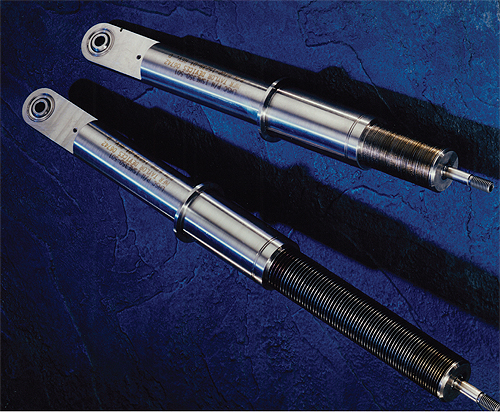 Two metal bellows seals are used to seal fluid in the damper. As the damper moves, the two bellows alternately extend and retract by flexure of the individual bellows segments. Since the seal element elastically flexes rather than slides, seal hysteresis is nearly zero. The volume displaced by the compressing bellows passes through the crossover ports to the extending bellows at the opposite end of the damper. While this is occurring, damping forces are produced by orifices in the damping head, and the pressures generated are kept isolated from the metal bellows by high restriction hydrodynamic labyrinth bushings. Because hydrodynamic bushings are used, no sliding contact with the piston rod occurs, assuring frictionless performance.

Adapting this basic design to the Millennium Bridge involved simply scaling the small satellite dampers to the required size range. All parts, including the metal bellows, were designed with low stress levels to provide an endurance life in excess of 2 x 109 cycles. The metal bellows and other moving parts were constructed from stainless steel for corrosion resistance. A total of 37 dampers were constructed, of 7 different types.

To assure a high resolution output, all damper attachment clevises were fabricated with fitted spherical bearings and fitted mounting pins, such that zero net end play existed in the attachment brackets.

All dampers were fabricated and delivered to the bridge site in 2001, and testing of the structure with groups of pedestrians began in January 2002. Testing consisted of well-regulated crossings on the bridge by the entire crowd at different walking speeds. The tests proved to be anticlimactic—the bridge behavior being generally described as “rock solid” by the crowd. More importantly to the engineering team, the damped bridge structure performed superbly: