Peering into darkness can strike fear into the hearts of some, but a new space telescope will soon peer into the darkness of “near space” (within a few thousand light years of Earth). Scientists are using the telescope to seek answers related to the field of high-energy astrophysics.

The CALorimetric Electron Telescope (CALET) investigation will rely on the instrument to track the trajectory of cosmic ray particles and measure their charge and energy. The instrument is optimized for measuring electrons and gamma rays, which may contain the signature of dark matter or nearby sources of high-energy particle acceleration.

“The investigation is part of an international effort (involving Japan, Italy and USA) to understand the mechanisms of particle acceleration and propagation of cosmic rays in the galaxy, to identify their sources of acceleration, their elemental composition as a function of energy, and possibly to unveil the nature of dark matter,” said CALET principal investigator Dr. Shoji Torii. 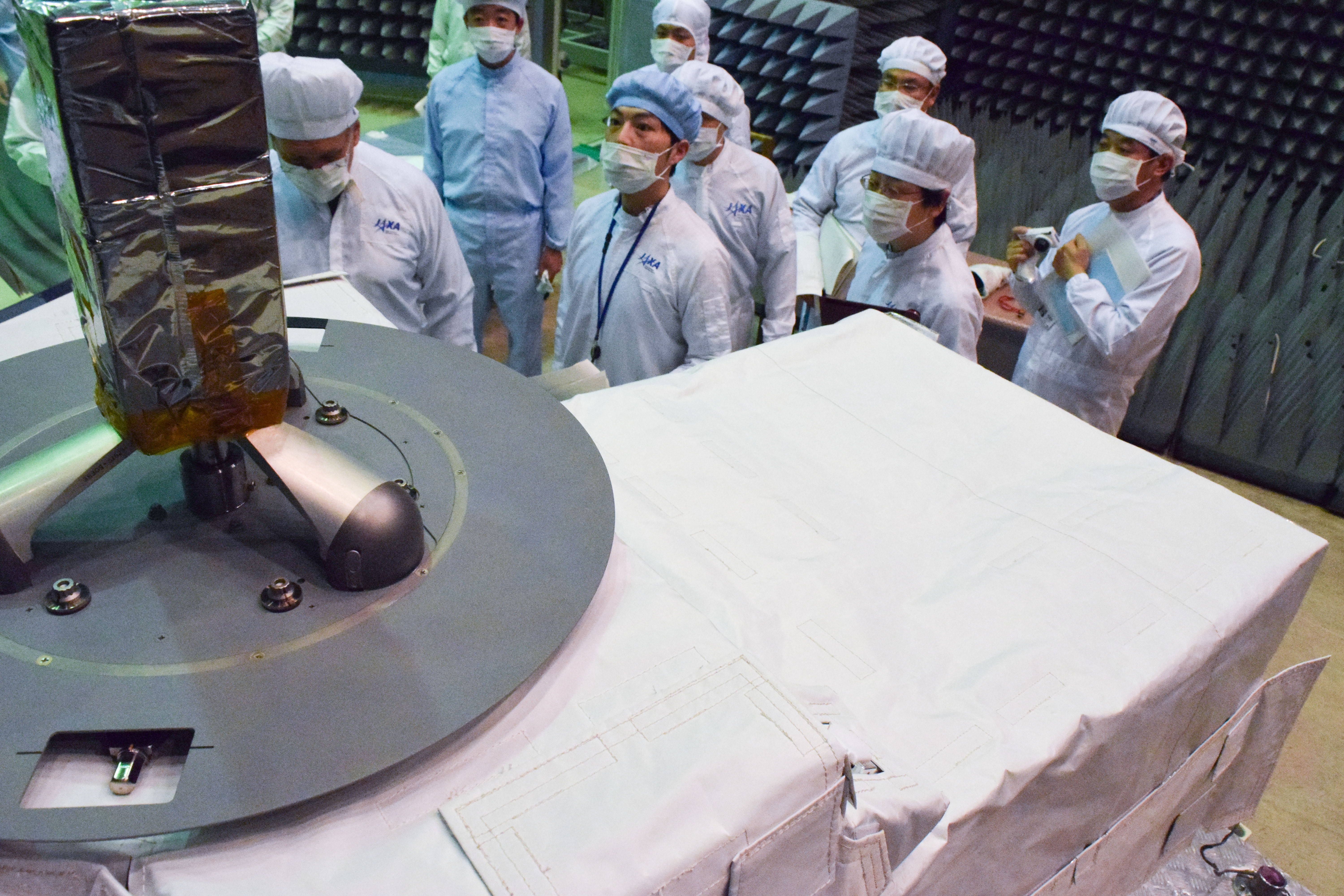 “We know that dark matter makes up about a quarter of the mass-energy of the universe, but we can’t see it optically and don’t know what it is,” said Dr. John Wefel, and CALET co-principal investigator for the US team. “If CALET can see an unambiguous signature of dark matter, it could potentially produce a new understanding of the nature of dark matter.”

Right now, scientists are much more certain what dark matter is not, rather than what it is. This research may help scientists identify dark matter and fit it, more accurately, into standard models of the universe. 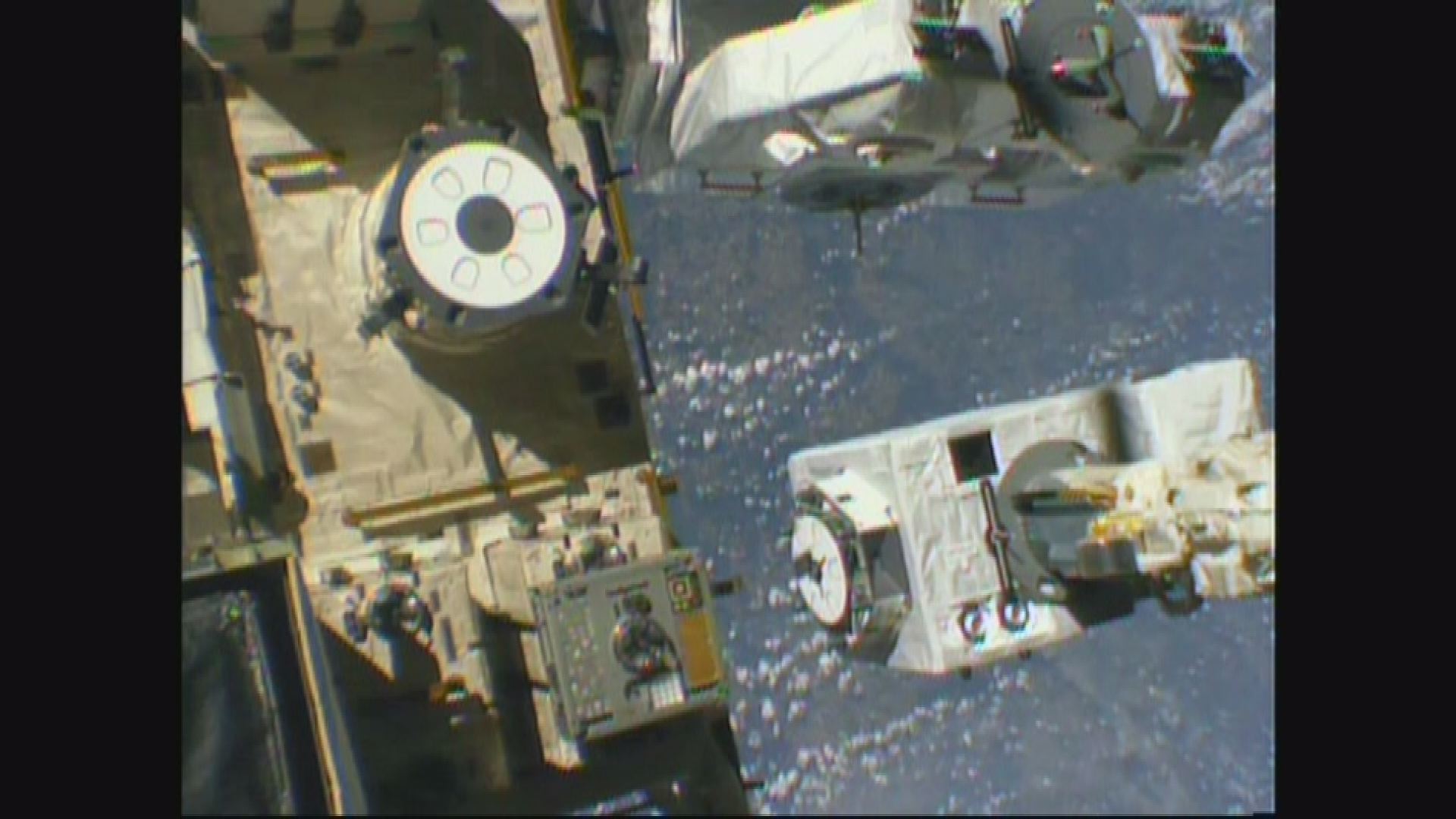 The CALorimetric Electron Telescope (CALET) is transferred from the exposed pallet to the Kibo’s exposed facility. Image credit: JAXA

­­­­­­The instrument is a charged particle telescope designed to measure electrons, protons, nuclei and gamma rays. Unlike the telescopes that are used to pinpoint stars and planets in the night sky, CALET operates in a scanning mode. As it looks upward, it records each cosmic ray event that enters its field of view and triggers its detectors to take measurements of the cosmic ray. These measurements are recorded on the space station and sent to a ground station where they are fed into computers running analysis codes that allow scientists to reconstruct each event.

From the resulting measurements, scientists must then separate electrons from the protons, gamma rays and the higher Z elements (chemical elements with >1 proton in the nucleus). They then sort the particles by energy to extend the existing data to higher energies and search for signatures of new astrophysics processes and phenomena like dark matter and nearby particle acceleration to study cosmic ray propagation in the galaxy.

“The major theoretical model attributes dark matter to weakly interacting massive particles (WIMPs), whose nature is predicted by various high energy physics models,” said Torii. “In these models, a WIMP would be its own antiparticle and, when two of them get together, they annihilate, producing known particles like electron/positron pairs, proton/anti-proton pairs, and gamma rays.”

The CALorimetric Electron Telescope (CALET) is transferred from the exposed pallet to the Kibo’s exposed facility (EF). Image credit: JAXA

Searching for excess annihilation products (i.e. electrons and gamma rays) is one way to try to identify a dark matter candidate and this is where CALET helps scientists. CALET joins another ISS investigation searching for excess annihilation products, the Alpha Magenetic Spectrometer or AMS, which is looking at positrons and antiprotons to identify dark matter.

“Dark matter is still a puzzle,” said Torii. “By measuring with good energy resolution the spectrum of high energy cosmic electrons and photons, CALET may make a discovery or exclude existing models.”

“Seeing an appropriate signature in the electron spectrum and/or gamma rays would be extremely important since this would set the mass scale (weight) for the dark matter particles, which would in turn allow theorists to better determine new physics associated with the WIMP,” said Torii, adding that it is possible that a signature may be found that is not indicative of dark matter, but rather indicates a nearby source of charged particle acceleration.

“The latter would be [a] huge achievement since no individual sources have ever been positively identified,” said Torii. “Such objects seem to be able to accelerate particles to energies far higher than we can achieve on Earth using the largest machines and we want to learn how nature does this, with possible applications here on Earth.”

Understanding the location of these sources as well as particle propagation (the time particles spend, and distance traveled, wandering around the galaxy) means scientists can infer the shape of the cosmic ray spectrum at the source. Gaining a better understanding of how cosmic rays originate and the mechanisms of particle acceleration and propagation is important to space travel and for understanding the radiation environment in space and on Earth.

“Basically, CALET is after new information about how our little corner of the universe works,” said Torii, who added that the investigation underscores the importance of the space station as a platform for performing investigations and for successful international collaboration.