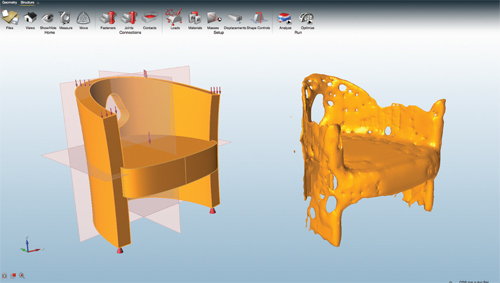 The power of all these numerical methods is their ability to rationally and rapidly search through design alternatives for the best possible design(s). Parameters in a design that can be varied to search for a “best” design are called design variables. Given these variables, design can be structured as a process of finding the minimum or maximum of some attribute, which is termed the objective function. For a design to be acceptable, it must also satisfy certain requirements, or design constraints. Optimization is the process of automatically changing the design variables to identify the minimum or maximum of the objective function while satisfying the design constraints.

Optimization with Tosca Structure done on a vehicle model that has been developed by The National Crash Analysis Center (NCAC) of The George Washington University under a contract with the FHWA and NHTSA of the U.S. Dept. of Transportation.
Source: SIMULIA

Here’s how these methods work, and what kinds of problems they help engineers solve: 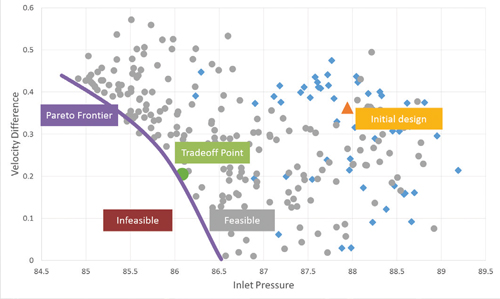 Topology optimization denotes optimizing material layout within a given physical design volume, for a given set of loads and boundary conditions, so that the resulting layout meets prescribed performance targets. This is often used to identify a conceptual design that best meets specified design requirements, which is then refined for performance and manufacturability. It frequently yields biomorphic-appearing shapes best suited to additive manufacturing methods, before being modified for production by conventional subtractive manufacturing.

Topometry optimization is similar to topology optimization but applied to 2D elements, with the variables restricted to the element-wise thicknesses.

Topography optimization, like topometry optimization, is applicable only to 2D or shell elements, and aims at finding the optimum bead pattern in a component.

Parameter optimization, in some respects a more generalized version of structural optimization, is a procedure for finding values for any parameter(s) in a design—not just structural parameters—that are optimal in some defined respect, such as minimization of a specified objective function over a defined data set.

Multidisciplinary optimization (MDO) incorporates all relevant disciplines—structural (linear or nonlinear, static or dynamic, bulk materials or composites), fluid, thermal, acoustic, NVH, multibody dynamics, or any combination—simultaneously in an optimization problem. By exploiting interactions among disciplines, MDO can identify design solutions that are superior to those arrived at by optimizing each discipline sequentially, with substantially less expenditure of engineering time and labor.

Multi-objective or Pareto optimization is a method for numerically addressing the fact that real-world optimization problems usually have more than one objective, and these objectives often conflict or compete with one another. For example, in optimizing a structural design, the desired design will be both lightweight and rigid. Because these two objectives conflict, a tradeoff must be made: there will be one design that is lightest, another design that is stiffest, and an infinite number of possible designs that are some compromise of weight and stiffness. The set of tradeoff designs that cannot be improved on according to one criterion without harming another criterion is called the Pareto set, and the curve plotting the Pareto set is called the Pareto frontier. Once the Pareto frontier has been identified, the action of comparing these various Pareto-optimal solutions with one another to choose the preferred solution is based on exogenous factors (outside the computer model), and is carried out by human decision-makers. 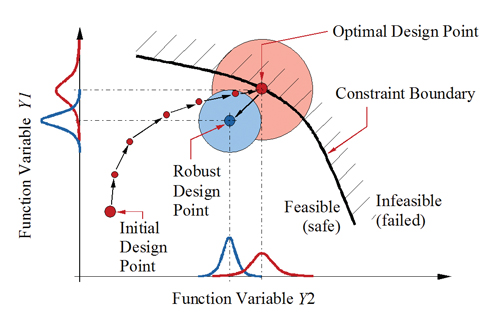 Robustness and reliability optimization are methods for managing the fact that product designs are nominal, while manufacturing and operating conditions are real world. Finite geometric tolerances, variations in material properties, uncertainty in loading conditions, and other variances encountered by a product either in production or in service can cause it to perform slightly differently from its nominal, as-designed values. Therefore, robustness and reliability as design objectives beyond the nominal design are often desirable. Performance of robust and reliable designs is less affected by these expected variations, and remains at or above specified acceptable levels in all conditions. To evaluate the robustness and reliability of a design during simulation, its variables and system inputs are made stochastic by being defined in terms of both mean value and a statistical distribution function. The resulting system performance characteristics are then measured in terms of a mean value and its variance.