Developing a perfectly energy-efficient building is relatively easy to do—if you don’t give the building’s occupants any control over their environment. Since nobody wants that kind of building, Professor Christoph Reinhart has focused his career on finding ways to make buildings more energy-efficient while keeping user needs in mind.

“At this point in designing buildings, the biggest uncertainty comes from user behavior,” says Reinhart, who heads the Sustainable Design Lab in MIT’s Department of Architecture. “Once you understand heat flow, it’s a very exact science to see how much heat to add or take from a space.”

Trained in physics, Reinhart made the move to architecture because he wanted to apply the scientific concepts he’d learned to make buildings more comfortable and energy-efficient. Today, he is internationally known for his work in what architects call “daylighting”—the use of natural light to illuminate building interiors—and urban-level environmental building performance analysis. The design tools that emerged from his lab are used by architects and urban planners in more than 90 countries.

The Sustainable Design Lab’s work has also produced two spinoff companies: Mapdwell, which provides individualized cost-benefit analyses for installing solar panels; and Solemma, which provides environmental analysis tools such as DIVA-for-Rhino, a highly optimized daylighting and energy modeling software component. Reinhart is a co-founder and strategic development advisor at Mapdwell, and he is CEO of Solemma.

Through it all, physics has remained a central underpinning. “Everything our lab develops is based on physics first,” says Reinhart, who earned master’s degrees in physics from Albert Ludwigs Universität in Freiburg, Germany, and Simon Fraser University in Vancouver, Canada.

A lifelong environmentalist, Reinhart says he was inspired to study architecture in part by the work of the Fraunhofer Institute for Solar Energy Systems, which built a completely self-sufficient solar house in Freiburg in the early 1990s.

While finishing his master’s thesis, Reinhart says, he also read an article that suggested that features such as color can be more important than performance to architects choosing a solar system—an idea that drove him to find ways to empower architects to consider aesthetics and the environmental performance of their designs at the same time. He began this effort by investigating daylighting at the Technical University of Karlsruhe, Germany.

Light is incredibly important from a design standpoint—architects talk of “painting with light”—but there are also significant technical challenges involved in lighting, such as how to manage heat and glare, Reinhart says.

“You need good sky models and you need good rendering tools to model the light. You also need computer science to make it faster—but that’s just the basics,” Reinhart says, noting that the next step is to consider how people perceive and use natural light. “This really nuanced way of thinking is what makes daylighting so fun and interesting.”

For example, designers typically render buildings with all the blinds open. If they learn that people will keep the blinds down 90 percent of the time with a given design, they are likely to rethink it, Reinhart says, because “nobody wants that.”

The daylighting analysis software developed by Reinhart’s team in 1998 provides just this kind of information. Known as DAYSIM, it is now used all over the world to model annual daylight availability in and around buildings.

“Daylighting was really my first way into architecture,” Reinhart says, noting that he thinks it’s wonderful that the field combines “rock solid science” like sky modeling with more subjective questions related to the users’ experience, such as: “When is sunlight a liability?” and “When does it add visual interest?”

After earning his doctorate in architecture from Technical University in 2001, Reinhart taught briefly at McGill University in Canada before being named an associate professor of architecture at Harvard University’s Graduate School of Design. In 2009, the student forum there named him faculty member of the year.

In 2012, he joined the faculty at MIT, where he typically supervises seven or eight graduate students, including about three working on their Ph.D.s. Often, he also has students working in his lab through the Undergraduate Research Opportunities Program. Several students majoring in computer science have proved particularly helpful, he says.

“It’s amazing what MIT students can implement,” he says.

Reinhart is also an instructor, of course, notably teaching 4.401/4.464 (Environmental Technologies in Buildings), which focuses on how to assess the energy efficiency of buildings.

“There’s nothing more fun—especially at an institution like MIT—than to teach these concepts,” he says.

The MIT Energy Initiative (MITEI) is now working to make that subject available online via MITx, and the class is expected to be part of a planned graduate certificate in energy, according to Antje Danielson, MITEI’s director of education.

Meanwhile, Reinhart has scaled his own research up to modeling energy use at the city level. In 2016, he and colleagues unveiled an energy model for Boston that estimates the gas and electricity demands of every building in the city—and his team has since assessed other urban areas.

This work has underscored for him how significant user behavior is to calculating energy use.

“For an individual building you can get a sense of the user behavior, but if you want to model a whole city, that problem explodes on you,” Reinhart says, noting that his team uses statistical methods such as Bayesian calibration to determine likely behaviors.

Essentially, they collect data on energy use and train the computer to recognize different scenarios, such as the energy used by different numbers of people and appliances.

“We throw 800 user behaviors at a sample of buildings, and since we know how much energy these buildings actually use, we only keep those behavioral patterns that give us the right energy use,” Reinhart says, explaining that repeating the process produces a curve that indicates the buildings’ most likely uses. “We don’t know exactly where people are, but at the urban level, we get it right.”

Determining how energy is being used at this broad scale provides critical information for addressing the needs of the energy system as a whole, Reinhart says. That’s why Reinhart is currently working with Exelon Corporation, a major national energy provider, to assess energy use in Chicago. “We can say, let’s foster these kinds of upgrades and pretty much guarantee that this is how the energy load throughout a neighborhood or for particular substations will change—which is just what utilities want to know,” he says.

Recently, Reinhart has also begun investigating ways to make food production more energy-efficient and sustainable. His lab is developing a software component that can estimate food yields, associated use of energy and water, and the carbon emissions that result for different types of urban farms.

For example, hydroponic container farming—a system of growing food without soil inside something like a shipping container—is now being promoted by companies in some cities, including Boston. This system typically uses more electricity than conventional farming does, but that energy use can be more than offset by the reduced need for transportation, Reinhart says. Already, Reinhart’s team has shown that rooftop and container farming on available land in Lisbon, Portugal, could theoretically meet the city’s total vegetable demand.

This work exploring the nexus between food, energy, and water is just the next level of complexity for Reinhart in a career dedicated to moving the needle on sustainability. Fortunately, he’s not alone in his work; he has sent a host of young academics out into the world to work on similar concerns.

Reinhart’s former graduate students now work at universities including Cornell, Harvard, Syracuse, and the University of Toronto, and he continues to collaborate with them on projects.

It’s like having a growing family, says Reinhart, a father of two. “Students never leave. It’s like kids.” 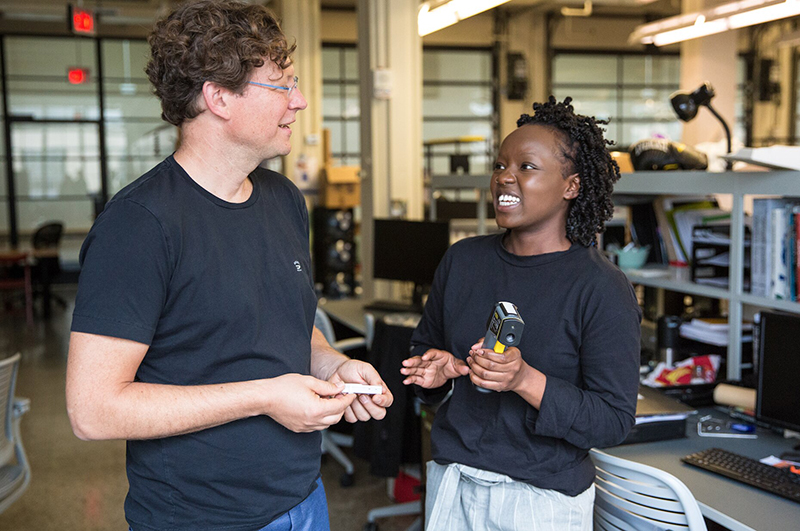