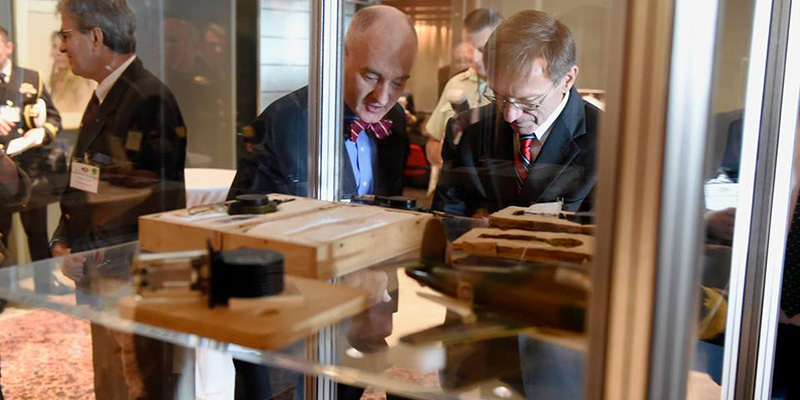 Director of Research Dr. Larry Schuette, left, Office of Naval Research, discusses scientific artifacts on display at the Canadian Embassy during the 75th anniversary commemoration of the Tizard Mission to Sean J. Stackley, assistant secretary of the Navy for research, development and acquisition. (U.S. Navy photo by John F. Williams/Released)

On Nov. 17, at the Embassy of Canada in Washington, the U.S. Office of Naval Research, the British Embassy and the Canadian Embassy co-hosted a one-day, 75th-anniversary commemoration of the Tizard Mission—a pivotal moment of transatlantic political cooperation and scientific collaboration that contributed to Allied victory in World War II.

It also led to a range of technological advances that resonates even today—including the critical cavity magnetron, which made possible small, powerful radars that could be placed on aircraft, ships and land-based platforms.

“The recent atrocities in Paris highlight the unpredictability of today’s external threats, and with that, the compelling need to rapidly deliver relevant, innovative technology solutions,” said Chief of Naval Research Rear Adm. Mat Winter. “That was true in 1940, it is true today and will be true in 2040.”

The Tizard Mission—named after Sir Henry Tizard, the prominent British scientist who organized it—traveled to the U.S. and Canada in 1940, during the Battle of Britain, when that nation was fighting an onslaught by the German Air Force (Luftwaffe). The British shared information about more than 20 of the greatest scientific advances of the war thus far, in the hope of securing help in producing a range of new technologies.

In addition to the cavity magnetron, other breakthroughs included designs for rockets and jet engines, submarine-detection devices and gyroscopic gunsights—as well as a memorandum outlining the feasibility of an atomic bomb.

“The Tizard Mission, and the partnership resulting from it, showed that the way we develop technology is just as important as how we use technology,” said Dr. Vernon Gibson, chief scientific adviser, U.K. Ministry of Defence. “Tizard was a desperate act of trust that sowed the seeds for future victory and collaboration.”

The commemoration included several panel discussions during which distinguished scientists, engineers and historians talked about the importance of transatlantic S&T cooperation. Attendees also were able to view a display showcasing various artifacts from the Tizard Mission, including several cavity magnetrons.

“In the U.S. Navy, the most important ships we have are partnerships,” said Winter. “The nations represented here today must build on our history of scientific cooperation and mutual respect and reliance, in order to defend against future adversaries.”

To view videos from the Tizard event, click here.